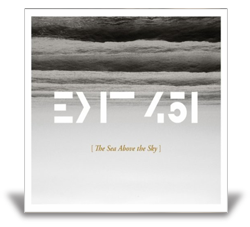 Exit 451's The Sea Above the Sky (The 451 Recording House RH-EX-01-CA-09H-09) sounds both new and familiar. The album is reminiscent of early Cure and U2, with perhaps some Peter Gabriel thrown in, but it stands strongly on its own. It's a well-crafted disc, built around electronic keyboards, simple but effective guitar lines, and passionate lead vocals. And while it seems somewhat rooted in the music of the post-punk era, it doesn't feel dated. The Sea Above the Sky is such a confident debut that I wasn't surprised when I discovered that its creators have been working in the music industry for 20 years.

Martin and Alain Avon founded the band Imaginary Steps in Montreal in 1990 and enjoyed success with a single, "The More I Learn," which led to work in New York and opening slots for bigger acts. When the band's lead singer quit, the Avon brothers continued writing music and working in recording studios in Canada. In 1999 they met singer and songwriter JP Alepins, who joined them as a songwriting partner, pianist, and vocalist.

According to the band's bio, they suffered through management difficulties and other obstacles but continued to write and record. Their major focus soon became the resuscitation of The Bank Studio 451 in Montreal, which they fashioned into one of the best recording studios in North America. Since the studio reopened in 2004, both Canadian and American artists, including Daniel Lanois and Shakira, have recorded there. In 2009 the band became Exit 451 and established 451 Recording House as its own label.

When the Avons and Alepins were finally ready to pour their energy into recording the songs they had written, they chose an associate of Lanois, Mark Howard, whose extensive resume includes work with Bob Dylan, Tom Waits, and REM. The Sea Above the Sky uses some current digital technology, but it's analog in its approach. It contains no editing or post-production sweetening, and in contrast to so many contemporary pop recordings, it's rich in sonic detail without being crowded or fatiguing. It breathes, and because of the band's talent and experience each detail is well chosen and necessary.

The disc's vintage sound is appropriate for the music's overall feel, which is reminiscent of some of the best late 1980s and '90s bands. Alepins includes Depeche Mode, David Bowie, Gorillaz, and Radiohead on his list of influences, and he says that Peter Gabriel, Coldplay, and U2 are touchstones for The Sea Above the Sky because of the natural recording process (the band recorded live with very few edits) and the sound treatment (they used tube microphones, tube compressors, and analog SSL strips). Listen closely and you'll also hear hints of Chasing Shadows, one of my favorite post-punk records from the '80s, by C.S. Angels (known outside of the US as the Comsat Angels).

The sparseness of the arrangements on The Sea Above the Sky highlights the strength of the songs. "You Exist" opens with a guitar arpeggio, keys, bass, drums (Steve Nistor is the drummer on all tracks), and Alepins' vocal. During the verse, instrumentation scales back to piano, bass, a softly strummed guitar, and drums. The relative simplicity of the arrangements allows the listener to concentrate on the melody and lyrics. "We wanted to liberate the lyrics and left some space for the listener to hop in," Alepins said in a recent interview. "In order to do that, we simplified some parts, we improvised a lot (we never played our parts the same way twice), and we were never really given the chance of doing more than two takes."

"Face of Maya," a terrific straight-ahead rocker, features a strong groove by Nistor and an effective and melodic bass line by Martin Avon. Alain Avon plays a funky acoustic guitar that carries the harmonic structure of the song, but it's his witty, psychedelic-era fuzz guitar that sells it. A sputtering lead guitar line, mixed slightly back, closes each of the choruses. "Face of Maya" is one of the tunes that marks Exit 451 as a great band that can't be categorized. "Morning Star," the song that follows, also seems to embrace several genres -- modern rock, disco, and post-punk -- to create something unique and memorable. At just under two and a half minutes, it's the perfect single.

Martin Avon's intelligent arrangements guide the songs, but producer Mark Howard also helped move the band in the right direction. "[He] works in a very instinctive way," Alepins said. "He reads the lyrics, picks one, and asks us to play an acoustic version to start with. Then we all improvise in the control room while Mark gives some initial directions to the band. We build the songs in a very organic way; we all follow the same creation stream. And when the magic operates, we start the recordings. In the end, some songs will stay very close the demos, while some other songs can turn out to be surprisingly different. Most of the album was recorded that way -- we needed very few edits and overdubs."

The intelligent choices of Howard and the band help make The Sea Above the Sky an enjoyable listen. The tremolos on the electric guitar played against the '90s-style electronic keyboards in "You Exist" are unusual and even retro (if from different eras), but the song doesn't sound dated. Exit 451 takes things from rock's history, whether it's the psychedelic era, David Bowie's '70s collaborations with Brian Eno, or synth-based bands like Depeche Mode, and finds new ways to combine them. Martin Avon's bouncy, melodic bass playing and Steve Nistor's versatile drumming solidly anchor all the arrangements, but the songs ultimately come together through the impassioned vocals of JP Alepins. He has an impressive range, and he brings honest emotion to his lyrics, which he says can be interpreted as short stories. When he sings, "So far away . . . Now God has never seemed so far away" on "War Tale," he sounds both angry and sad. The song is at once a plea for peace and a resignation to the forces of history: "I raise my eyes to the sky / I leave it all to God to decide / If one nation dies, another will rise."

The Sea Above the Sky is a beautifully textured recording, and it's a tribute both to the band and their studio. The acoustic guitars on "Face of Maya" resonate clearly, and the drums throughout the disc ring out with just the right amount of heft. Alepins' voice is sharply centered and has a clear, holographic presence. The disc is filled with sonic details that keep pulling you in, and they become richer with each listen. I've been playing the disc a lot over the last two weeks, and I've been finding new things in it every time. More than that, I've been hearing "You Exist," "Face of Maya," and several other tunes from the disc in my head when I take my morning bike ride. I should probably be paying more attention to the road.