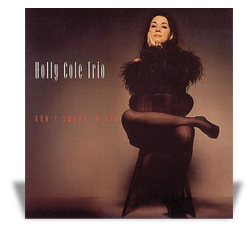 Jazz singer Holly Cole hasn’t caught on in the US to the extent she has in her native Canada or in Japan, where she has an avid following. Her newest disc, Night, isn’t even yet scheduled for release here, though it’s been available in Japan since July and will hit Canadian shops this month. Cole deserves the sales and adulation enjoyed by her contemporary fellow Canadian, Diana Krall. She’s adventurous -- she’s tried her hand at country and rock tunes, in addition to jazz standards and show tunes -- and, to my ears, is a more emotionally complex singer. I don’t mean to suggest that Krall doesn’t deserve her success, but Universal Music has promoted her aggressively, whereas Cole’s US labels seem to have relied on word of mouth.

I’d read about but had yet to hear Cole when I picked up a Japanese promo copy of her fourth album, Don’t Smoke in Bed, shortly after its release, in 1993 (CD, Toshiba-EMI TOCP-7734). At the time, I’d been listening to jazz for 20 years but was still catching up with jazz vocalists. Don’t Smoke in Bed was Cole’s second US release, and included tunes you’d expect a jazz singer to cover, including Cole Porter’s “Get Out of Town” and Rodgers and Hart’s “Everything I’ve Got.” The surprises were the inclusions of more modern choices, such as Johnny Nash’s “I Can See Clearly Now” and Everything But the Girl’s “Don’t Let the Teardrops Rust Your Shining Heart.”

David Was produced Don’t Smoke in Bed in a straightforward, uncluttered manner that focused cleanly on Cole’s voice and let the subtle contributions of her primary accompanists, pianist Aaron Davis and bassist David Piltch, come through. The Toshiba CD sounds very good (Bernie Grundman mastered it), but Kevin Gray has remastered the recording at Coherent Audio for a new two-channel SACD/CD (Analogue Productions CAPP 049 SA), and the music now flows more effortlessly because Gray has given it more room to stretch out.

Piltch’s bass in the opening of “I Can See Clearly Now” is more commanding on the SACD’s DSD tracks; I can now hear the vibration of the strings. The accompanying percussion is set off more distinctly and is easier to place in relation to the bass. Cole’s voice is farther out into the room, and the touch of reverb added to it is clearer, which gives it more body. When Davis enters, his piano rings out and the notes sustain longer. The notes of his solo are more sharply etched, as are Piltch’s bass lines. On the original CD, the strings that enhance the song as the arrangement builds crowd the soundstage, while on the SACD Gray gives all the instruments and Cole more room, so the strings seem more integrated into the fabric of the recording.

David Lindley plays haunting and effective lap-steel lines in “Don’t Let the Teardrops Rust Your Shining Heart,” and I could hear the complex overtones of the strings more clearly on the SACD as Lindley moves over the fingerboard with a glass slide. His solo sounds meatier, and the notes hang in space longer. “Get Out of Town” opens with Piltch’s bass, which throughout the SACD is slightly less prominent than on the CD, but is more realistically placed in the soundstage and better focused -- it’s easier to hear and appreciate within the context of the music. Howard Levy’s harmonica solo in “Get Out of Town” is more dynamic on SACD, and it’s much easier to visualize and place the bell of Joe Henderson’s saxophone in “Every Day Will Be Like a Holiday.”

Best of all, Gray’s remastering brings Cole’s voice out farther and puts the instruments in support of her. The SACD gives a greater sense of the music taking place within a three-dimensional space, and I felt a more immediate sense of Cole’s command of her voice. Her breath control and timing are impeccable, and the SACD conveys with greater excitement the choices she makes each moment as she sings. The original CD had some occasional sibilance in her voice -- it was never distracting, but the remastering removes it without softening or blunting the sound. I’d always enjoyed that CD, but advances in digital technology, along with the higher resolution of the SACD format, have made it possible to experience more fully all the small details that make this such an enjoyable recording. 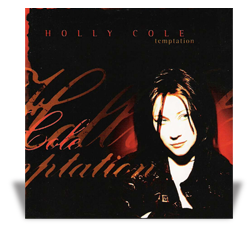 Cole’s voice is also more strongly presented in Gray’s remastering of Temptation, Cole’s 1995 collection of 16 Tom Waits songs (SACD/CD, Analogue Productions CAPP 048 SA). Three bonus tracks are added: “Shiver Me Timbers,” “The Last Rose of Summer,” and an alternate take of “(Looking for) The Heart of Saturday Night.” Doug Sax mastered the original release (CD, Metro Blue/Capitol CDP 8 31653 2), and it has long been an audiophile favorite. Between them, Gray and Sax have four of the best ears in the recording business, but the SACD demonstrates the advantages of higher sampling rates and Direct Stream Digital (DSD) technology.

Piltch’s bass rumbles in “Train Song,” and on the SACD I could feel it in my gut. I also found that I could better hear individual percussion lines. Similarly, Dougie Bowne’s brushstrokes in “Jersey Girl” seem to strike the drums harder and ring out more resolutely. I could hear more clearly that Aaron Davis varies the dynamics of his piano lines in “Jersey Girl,” creating a greater feeling of drama. In fact, Davis is very well served throughout the disc because the subtlety of his playing is so much more apparent. His gentle, spare lines in “I Don’t Wanna Grow Up” show an exquisite feel for exactly what’s needed to enhance Cole’s voice.

Temptation has more front-to-back openness on SACD, which lets us hear so much more of what’s happening inside the music. Cole’s voice is, as I mentioned earlier, farther out into the room, and its texture is more precisely rendered, more palpably real. But there are also small details that come through in a way they didn’t on the original CD. The percussion in “Tango Till They’re Sore” and “Train Song” is much more integral to the songs. The saxophones in “Little Boy Blue” are harmonically richer, and the distinctive timbres of each instrument are better separated. And the sound of a ship’s beams creaking in “Shiver Me Timbers” is so immediate I thought at first it was coming from another room in my house.

I wish I had Classic Records’ vinyl editions of these titles so I could do a definitive comparison. As it is, I found the SACDs’ DSD layers of these reissues to be superior overall to the two original CDs, which I’ve always considered to be of reference quality. The CD tracks of the new discs have also benefited from the new mastering tools; though they aren’t as three-dimensional as the DSD tracks, they do have more analog warmth. But it’s the DSD layer that justifies each disc’s $30 price tag; no Holly Cole fan who owns an SACD player should be without them.