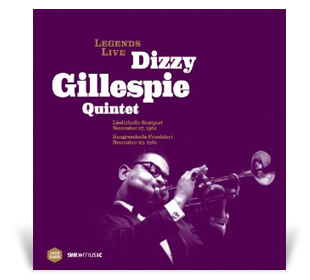 If you mention to most people that you still buy LPs, inevitably they’ll react with surprise: “They still make them?” I have media-savvy friends who are even surprised that SACDs are still being made. Physical media formats don’t sell in the numbers they used to (SACDs never sold many, but that was due to bad marketing). The people who still buy LPs and SACDs want to hear music in higher resolution than MP3s, and that’s also true of folks who still collect CDs, though the remaining sales in that medium can probably mostly be attributed to older shoppers who’ve never been attracted to downloading music.

What surprises me is that, after nearly three decades of the digitization that was supposed to kill the LP, vinyl is thriving. No, vinyl doesn’t sell in the numbers that downloads or even CDs do, let alone what LPs used to in their heyday, but it’s doing well enough that the Books-A-Million a few miles from my house has a good-sized section of the store devoted to vinyl.

I can think of five pressing plants in the US, and I’m sure there are a few more I don’t know about. Record Technology Incorporated (RTI), in Los Angeles, and Quality Record Pressings (QRP), in Salina, Kansas, are among the very best in the world, with exceptional quality-control standards. Pallas, in Germany, makes outstanding LPs. Discs pressed by these companies are absolutely quiet, and their attention to small details, such as the smooth feel of a record’s outer edge, are indications of how much care they take.

I knew that Germany’s Optimal Media pressed the Beatles’ recent Stereo Vinyl Box Set for the European market, and the buzz was that they did a great job. I hadn’t encountered any Optimal pressings, as far as I know, until I received for review three LPs released on Jazzhaus: from the label’s Lost Tapes series, Zoot Sims’s Baden-Baden, Germany -- June 23, 1958 (Jazzhaus 101715), and two from the Legends Live series: the Cannonball Adderley Quintet’s Liederhalle Stuttgart: March 20, 1969 (Jazzhaus 101712); and a Dizzy Gillespie Quintet disc recorded in Stuttgart and Frankfurt in 1961 (Jazzhaus 101713). The quality is comparable to the work of the pressing plants mentioned above. The lead-in groove is dead silent, the vinyl is well pressed and flat, and the edges are cleanly finished. They’re a testament to how good vinyl can sound when it’s done right.

Jazzhaus is an imprint of Arthaus Musik, based in Halle, Germany, which distributes music in nearly every available audio and video format, including DVD and Blu-ray. Jazzhaus researches the archives of Germany’s SWR radio jazz broadcasts, which go back to 1947, to find great jazz for release on CD and vinyl. The label has released five other titles, and each includes a free digital download of the entire album. The MP3s are at 320kbps, which, while not exactly high resolution, are better than the standard 256kbps. 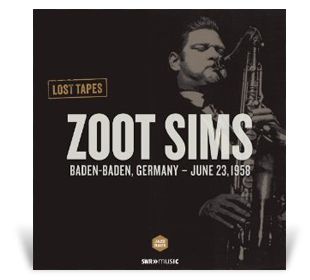 The Zoot Sims recording has been issued previously, in (according to the liner note) a flawed pressing. Sims was touring with Benny Goodman in 1958 and took a side trip to Baden-Baden, to appear in a concert organized by German music critic Joachim-Ernst Berendt. The musicians were European, except for Kenny Clarke, who had moved to Paris two years before, and Willie Dennis, who plays on two selections. Sims and Hans Koller are on tenor sax, Hans Hammerschmid is on piano, Peter Trunk is on bass, and Clarke is on drums. A few other players, including Dennis, join on “Blue Night,” to form a nonet. Sims sits out two tunes featuring Koller, and one that spotlights baritone sax player Helmut Brandt.

Sims and Koller play together on Jerome Kern’s “All the Things You Are,” and at first don’t lock up as solidly as Sims did with Al Cohn, his frequent collaborator, but they soon relax and state the opening theme. Sims solos with a slightly edgier tone than his German counterpart, picking at the melody and taking flight with it. Koller, a highly lyrical player with a softer tone than Sims, plays confidently here and is a resourceful improviser.

Sims is featured in “Tangerine,” and he uses space and timing -- playing just ahead or behind the beat -- to develop his ideas, his sometimes-gritty tone showing his debt to Coleman Hawkins. Koller’s run at “Fallin’ in Love” shows him to be a more fleet and straightforward player. The marked differences between them make for rewarding listening. One of the more interesting selections is “Minor Meeting for Two Clarinets,” with Sims and Koller playing that instrument.

The nonet arrangement for “Blue Night” is a high point of the record, reminiscent at points of Miles Davis’s Birth of the Cool sessions. Dennis on trombone and Helmut Brandt on baritone sax fire off good solos, and the band vamps solidly behind them. The group drops to five players for “I’ll Remember April,” with Koller and Dennis featured. Clarke and Trunk keep the session solidly grounded. Trunk played on a number of European jazz sessions and, based on his playing here, should be better known. Hammerschmid is capable, but is overall the least impressive soloist.

Lost Tapes will please fans of the great musician, and in the bargain they’ll discover a great player in Koller, who recorded more sessions in Europe with Sims. I’d be interested in hearing more work by Brandt, whose two appearances here show an easy touch with a difficult instrument. The mastering of the more-than-50-year-old live recording is fresh and clear, and captures the atmosphere of the recording space.

The group Dizzy Gillespie took to Europe in 1961 is largely the same one that appeared on his An Electrifying Evening with the Dizzy Gillespie Quintet (CD, Verve 314 557 544-2), recorded in February of that year, but with Mel Lewis on drums in place of Chuck Lampkin. That CD is marred somewhat by a bland recording and a considerable amount of master-tape hiss. The Legends Live disc was recorded at shows in Stuttgart and Frankfurt in November. The band is stronger, and the recording is a vast improvement. The quintet seems tighter, more confident. Lewis is a more centered and less busy drummer than Lampkin, and as a consequence the music has greater focus.

Both recordings include Gillespie’s “Kush”; the version the group played in Germany is at a quicker pace but doesn’t feel rushed, and Lewis holds the time down firmly. Gillespie and saxophonist Leo Wright are brilliant, full of ideas they roll off easily, with strong support from Lewis and bassist Bob Cunningham. Pianist Lalo Schifrin fires off a very aggressive but melodic solo that fills out the arrangement.

Gillespie pays tribute to Ellington with the great composer’s “The Mooche,” and once again, the band plays the tune in Germany more precisely than on the Verve disc. Gillespie and Wright harmonize effortlessly, and the solos, particularly Cunningham’s, flow more naturally than in the earlier performance.

Wright gets the spotlight on flute in “Willow Weep for Me,” with Lewis, Cunningham, and Schifrin providing subtle backing. Gillespie the entertainer is on hand for “Oop Shoo Be Do Be,” singing with enthusiasm and firing off a hot solo. “I Can’t Get Started” shows the quintet’s skill with a ballad, Gillespie playing a dynamic exploration of the melody and Schifrin helping him build momentum. All of the tunes show a band in close sync, anticipating each soloist’s needs and playing with precision in the ensemble sections.

As enjoyable as the Verve release is, the music on Gillespie’s Legends Live disc is a far better representation of this band’s powers, and in much better sound. “Kush” originates from a different show from the other tracks, and the mono sound is less immediate but very sharp, the instruments well balanced. 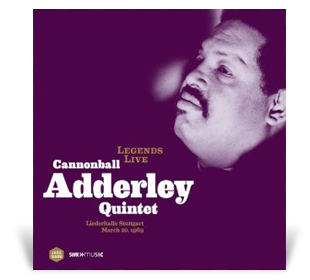 In 1969, Cannonball Adderley was touring Europe during a transitional time for jazz. Rock was ascendant, and Miles Davis would soon release In a Silent Way, an album that showed a marked rock influence. Still, Adderley had had a hit three years before with “Mercy, Mercy, Mercy,” written by his piano player, Joe Zawinul, and his music was accessible and popular.

The most surprising thing about Adderley’s Legends Live disc is how “out” some of the playing is, particularly from Adderley, who’s often thought of as a purely blues-based player. Zawinul, who was still in Adderley's band at the time, had played an important role on In a Silent Way, and may have pushed the group into new territory. His “Rumpelstiltskin” starts as the kind of soul-jazz romp Adderley was known for, but Cannonball and his brother Nat, on cornet, break down the tune and occasionally enter dissonant territory.

Nat Adderley’s gospel-drenched “Sweet Emma” is as funky as soul-jazz gets, and it still surprises me that Zawinul, an Austrian, had such a deeply intuitive feel for that genre. Zawinul switches to the Wurlitzer keyboard for Nat’s “Oh Babe,” another soulful outing. Cannonball is somewhat off-mike, giving a seminar on the blues, then exhorting his brother as he sings. Zawinul’s Wurlitzer solo carries hints of the jazz-fusion revolution to come. (That summer, Zawinul and saxophonist Wayne Shorter would begin playing in the sessions that would result in Miles Davis’s Bitches Brew, and within two years would found Weather Report together.) Cannonball and Nat state the theme on Roebuck “Pops” Staples’ “Why Am I Treated So Bad?,” and Zawinul, on Wurlitzer again, gets the lion’s share of solo time.

Zawinul’s “The Painted Desert” returns the quintet to something more avant-garde. He and the Adderleys take long, carefully developed solos, stretching their limits as players. On this tune you can hear how responsive and smart bassist Victor Gaskin and drummer Roy McCurdy are, both in helping set the tone of the improvisational sections and in carefully responding to the soloists. The liner notes for the recording highlight Zawinul, but the Adderley brothers are, as always, stellar, and this LP is a reminder that neither has gotten the recognition he deserves. I have many Cannonball Adderley albums in my collection; I’m very happy to add to them this cerebral and soulful LP.

The master tape has a couple of very brief dropouts, and one or two instances of peak distortion (Nat appears to have been too close to the microphone), but the mastering of this stereo recording is very good. I might have dialed in Gaskin more and pulled McCurdy down a bit, but the instruments register cleanly and the piano is especially focused. The CD includes three additional tracks, as does the digital download.

All three LPs have silent backgrounds and vivid sound. The covers are attractively designed and printed on lightweight cardboard. Manfred Deppe and Andrea Walz mastered all three to “high-end technology standards,” according to Jazzhaus’s website. Since the credits don’t specify analog, the quality of the sound leads me to believe it’s high-resolution digital. All three are available on CD, but I encourage you to buy them on LP -- and I hope Jazzhaus presses more from the SWR vaults.