High-End Audio in Tokyo and Paris

Two weeks, two shows, and a few impressions: while my North American colleagues were attending the Rocky Mountain Audio Fest, I visited Tokyo’s International Audio Show and Paris’s Festival Son & Image. The big news is that both were turntable and vinyl heavy, the shocker being the Paris show. The French market has never been all that audiophile-oriented, the nation considering itself more “cinephilic” despite the local talent at Jadis, Micromega, Focal, Cabasse, and other proper high-end brands. That has changed. 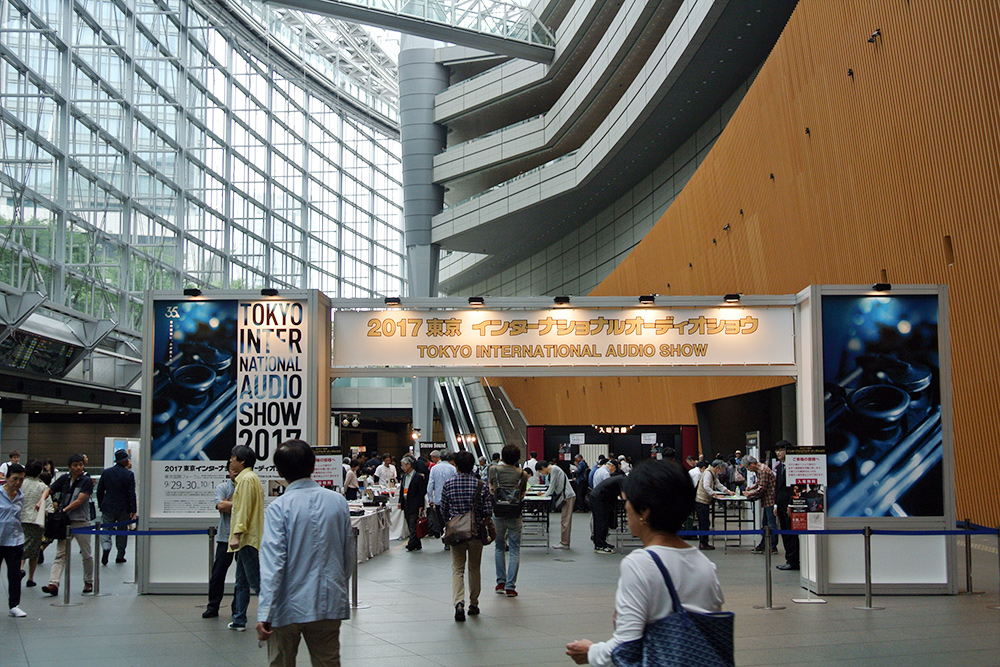 Tokyo’s stand-out was the record deck that took everyone by surprise: alongside the Premium versions of the existing TechDAS models was the all-new Air Force V. (The company skipped “Air Force IV” because the number four is unlucky in Japan and for other Far Eastern cultures.) As has become a tradition, TechDAS introduces its latest lower-priced model at half the price of the predecessor. 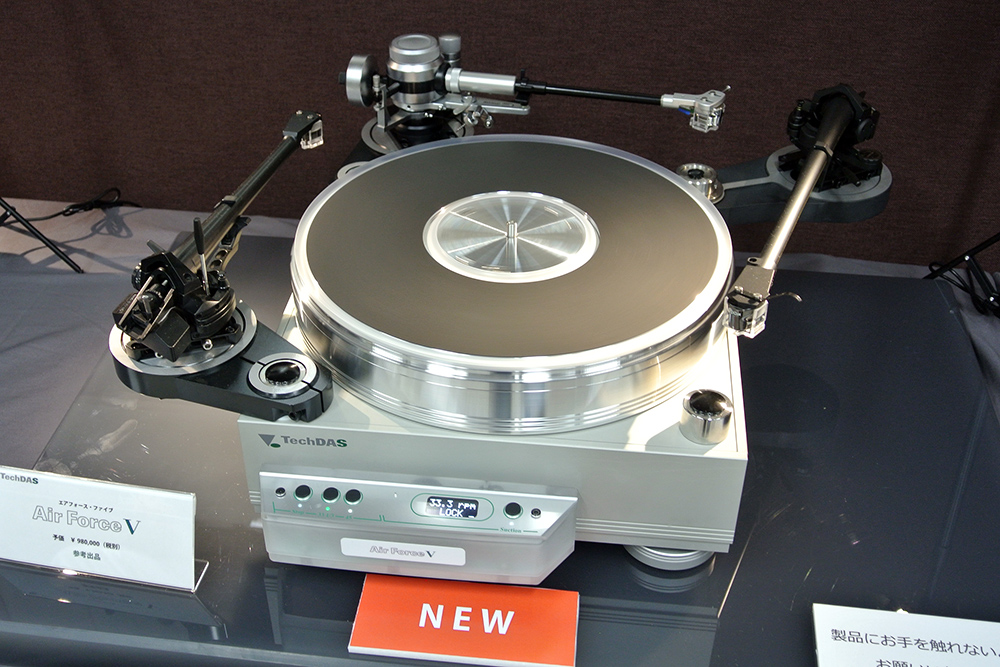 Not this time, though: the Air Force V -- which is basically an Air Force III minus the air suspension and with its motor under the platter rather than in an external housing -- costs a third of the price of the III. Allowing for shipping, local taxes, and importer greed, this ought to sell for under $15,000 if there’s any decency or integrity left in our industry -- in which case it could be a monumental success. I’d love to have one just for the facility to take four tonearms -- a dream for any reviewer or cartridge fetishist. (I’ve already selected the four “fantasy” arms and cartridges I’d install.) 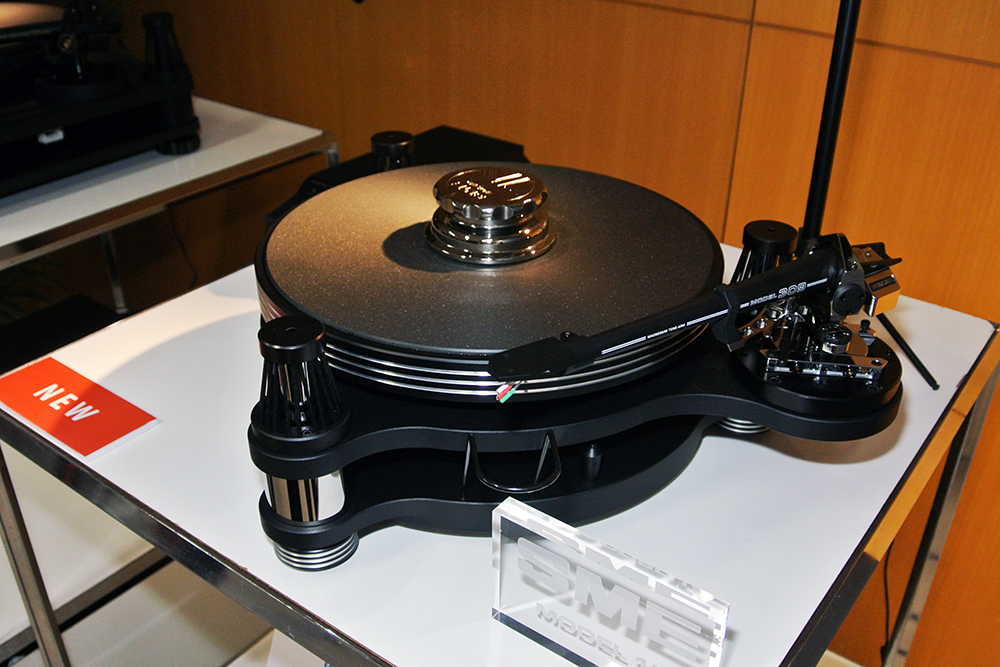 One of them would certainly be an SME, as I’ve been using them exclusively ever since the Series V first appeared. The company has just found a new Japanese distributor, so the entire range was on show, including a “luxury” version of the hugely popular star of the range, the Model 15. Detail changes include chromed uprights and grooves around the platter to relieve the otherwise total blackness of the standard version.

Although not vinyl-related, another ear-opening surprise in Tokyo was even more analogue: open-reel tape. EAR Yoshino’s Tim de Paravicini excitedly drew me into the room to hear something brought in by a visitor: a mint copy of the US pre-recorded open-reel of the Beatles’ Sgt. Pepper’s Lonely Hearts Club Band. This 50-year-old tape absolutely slaughtered the admittedly magnificent 2017 remastered/remixed anniversary edition. I sat there in disbelief: I heard more detail, more openness, and a greater sense of reality and presence than any other version I could recall. 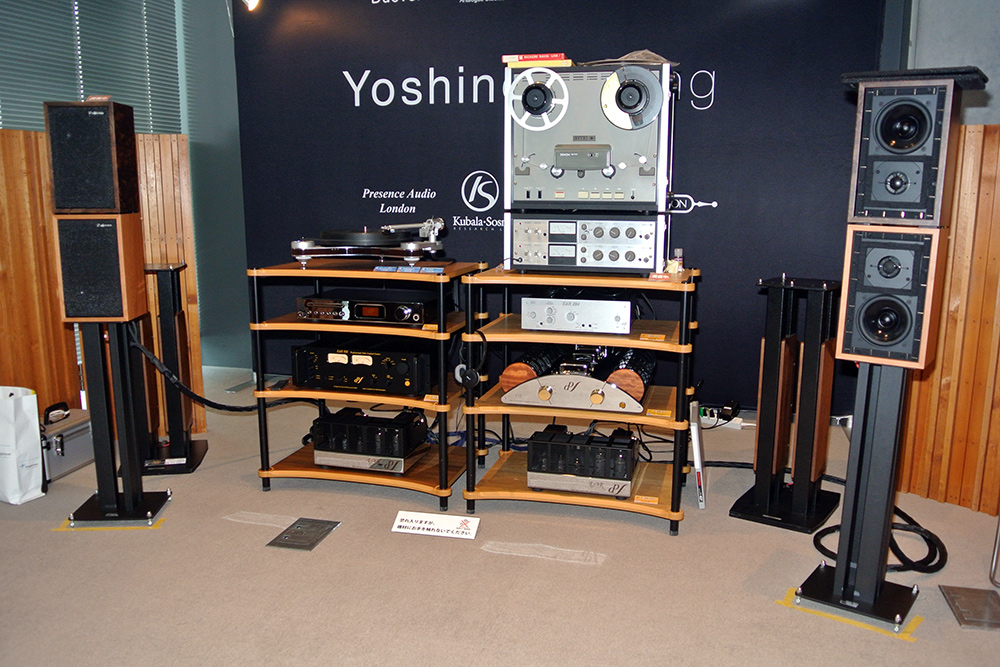 What was just as staggering was the system Tim used: stacked Falcon Acoustics BBC LS3/5As, in the manner of stacked Advents of yore. As I have two pairs of the originals, I stacked mine as soon as I returned home, and I don’t care if I never hear any other speakers. The sound is transcendent -- open, natural, with a realistic sense of space and plenty of detail. These are bargains at £2500 per pair.

It was also worth noting that Tim says, emphatically, that the Falcons are virtually indistinguishable from the originals -- great news if you’re tired of hunting for a pair of vintage LS3/5As on eBay, or refuse to countenance the five-figure sums they command from collectors in the Far East. The Falcons are probably better-made, too, than any of the historical offerings. 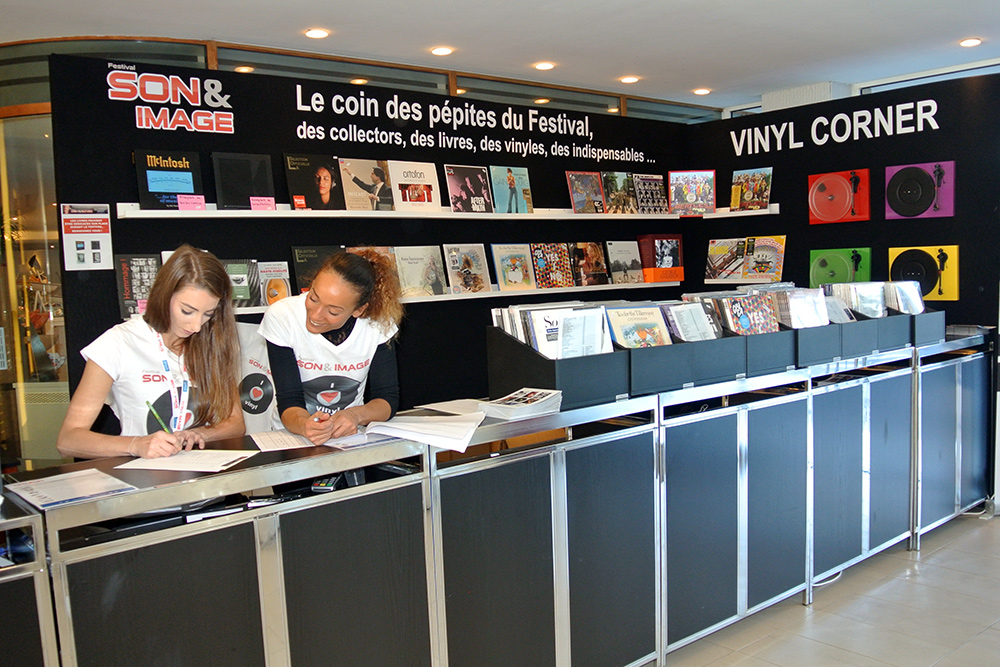 Paris’s analogue highlights include a vinyl store selling a selection of the latest LPs, with the emphasis on the remastered Beatles catalogue. 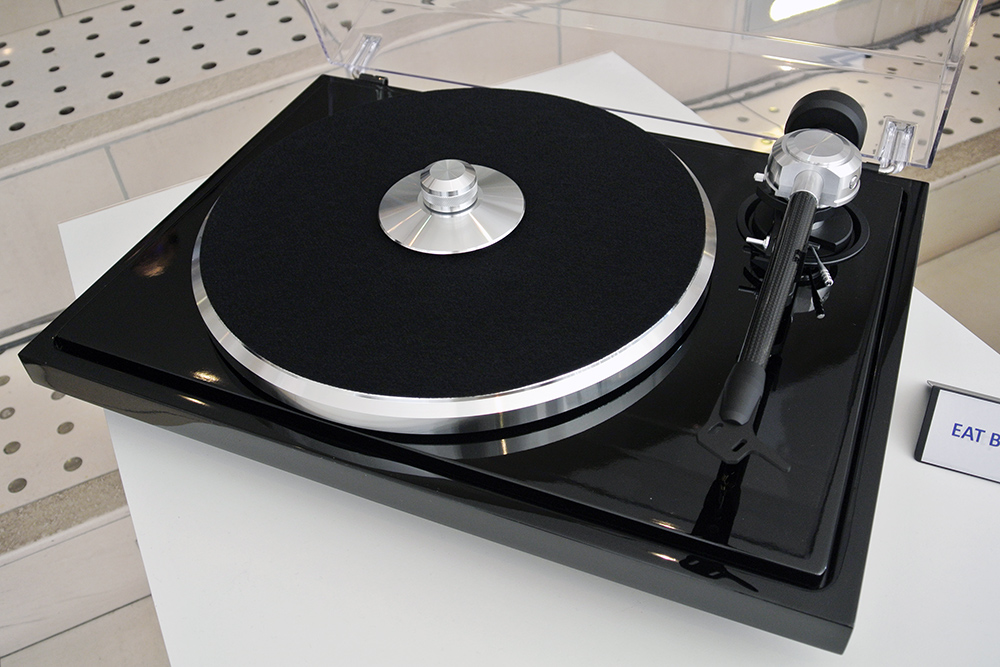 Diagonally opposite the stand, EAT showed its new entry-level model, the B-Sharp, with a price of €1580 including the C-Note 9” arm -- a bargain because this deck looks like it should sell for €2500! The company also unveiled a new heavyweight puck, beautifully machined and with rubber grips, for around €150. Can’t wait to see if it’s too heavy for my Linn LP12. But for any of you enjoying the revived interest in top-level Japanese direct-drives in search of a cool puck, this one is a honey. 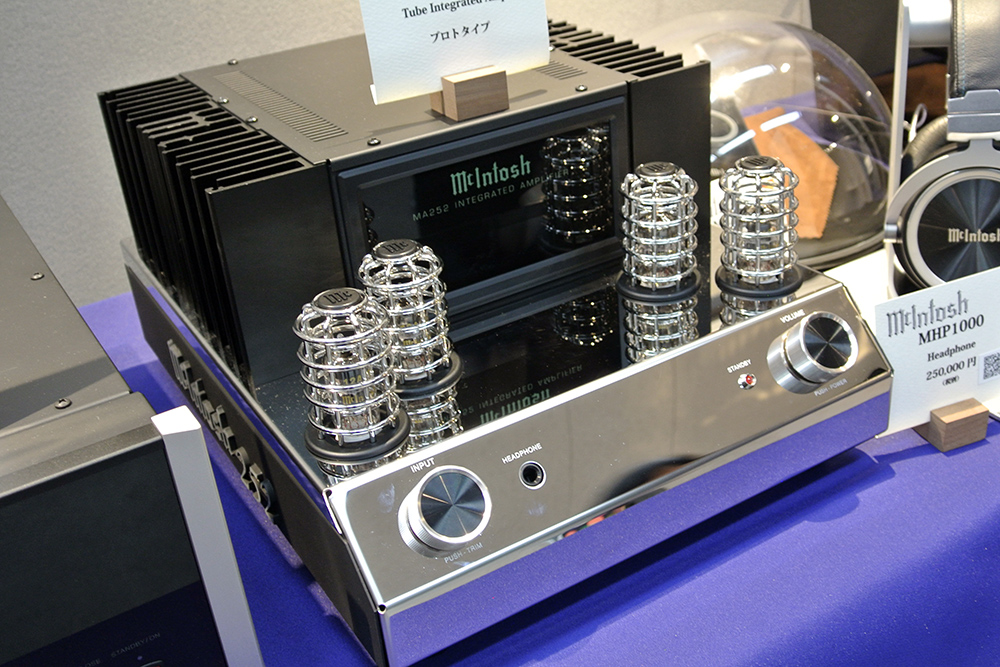 A week after I saw the even “closer to production” version of the long-awaited entry-level McIntosh MA252 integrated amplifier in Tokyo, the French distributor also had one to examine. This model breaks from McIntosh tradition in that it lacks a conventional front panel; instead, its layout recalls the form used by PrimaLuna and others who place the tubes at the front, proudly displayed, with a bank of transformers at the back. Unless my mind was playing tricks, I’m pretty sure the importer said the price would be circa €5000. 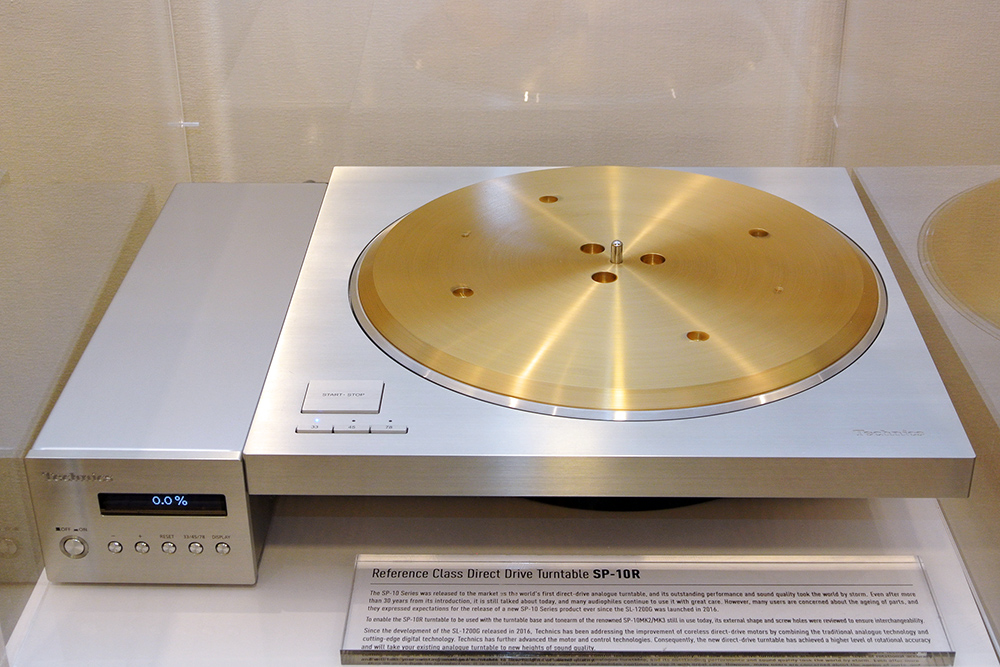 Also present at both shows was the Technics SP10R, this revived classic representing for many the pinnacle of Japanese direct-drive turntables. Finish was impeccable, and the unit was designed to drop into existing SP10 plinths; I suspect a mini-aftermarket industry will emerge to offer plinths on steroids. The price will have it fighting SME, TechDAS, Clearaudio, and VPI -- I thought I heard someone say $20,000, but don’t quote me.

We keep hearing on this side of the pond that the USA has plateaued for vinyl, and that Europe and Asia are keeping the faith. Judging by two shows that were hardly ever vinyl-dominated, that argument sounds valid. The next show for me is CES in January in Las Vegas, and judging by advance word, it isn’t exactly going to be fecund with high-end offerings. Watch this space.