Of all the many types of audio products, I most enjoy reviewing loudspeakers. Unlike, say, well-designed solid-state amplifiers -- which often sound so similar that I find them hard to tell apart -- no two speakers have ever sounded, to me, even close to identical. Even speakers of nearly the same size and identical driver configurations vary considerably in sound. This degree of difference among speakers gives a reviewer plenty to write about, and makes the job fun.

But the quality of sound emitted by any speaker can be only as good as the quality of signal sent it in the first place. That’s why, after speakers, I most enjoy writing about source components -- the beginning of the listening chain in the home, where it all starts. Because, at the moment, I have little interest in turntables -- that means digital sources: optical-disc players and DACs, the latter being far more relevant today, given the dominance of digital files played from computers and the increasing numbers of audiophiles who use online streaming services. This is why I’ve long been on the lookout for digital source components that reveal every detail in my recordings. 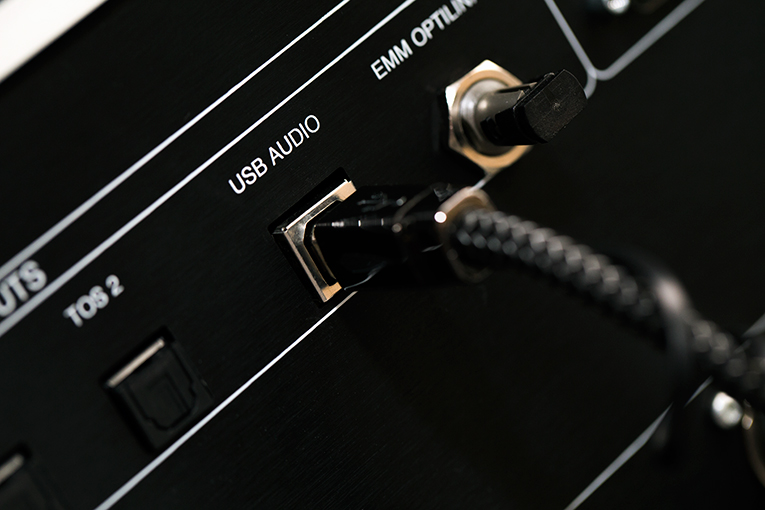 This summer, looking for DACs to review, I found what I think are a couple of doozies: Aqua–Acoustic Quality’s Formula ($14,000) and EMM Labs’ DA2 ($25,000), designed and manufactured in, respectively, Italy and Canada. Three things attracted me to them. First, each company touted its product as representing their very best effort. Second, these DACs convert digital signals to analog in completely different ways: the Aqua uses ladder-type (i.e., multibit) internal converters, the EMM single-bit ones, which some like to refer to as DSD. (DSD is the tradename that Philips and Sony applied to 1-bit processing when they developed the Super Audio Compact Disc, or SACD.) As its name implies, 1-bit conversion uses only a single bit and an extremely high sampling frequency (pulse density modulation, or PDM); multibit conversion (pulse code modulation, or PCM) uses many more bits (usually 16 to 24) and much lower sampling frequencies. The third thing that attracted me are these companies’ uses of custom-made D/A converters. Instead of using off-the-shelf DAC chips from ESS Technology, Burr-Brown, or Asahi Kasei Microdevices (AKM), as almost everyone else does, Aqua and EMM Labs have designed and make their own DAC circuits. 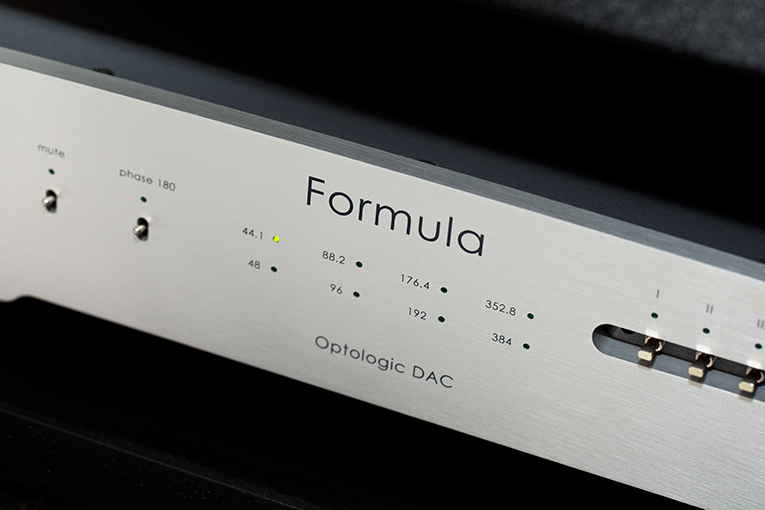 The Formula is Aqua’s first crack at creating their own converter, dubbed Optologic, in which they use discrete resistors. What’s more, it includes no digital filters or oversampling, which raised my eyebrows high. In most modern DACs, digital filters are used to smooth the converted waveform and get rid of the aliasing artifacts inherent in the process of converting a signal from digital to analog; oversampling is used to ensure that any subsequent filters, analog or digital, operate at frequencies far above the audioband. Instead, Aqua has chosen to do their filtering and smoothing entirely in the analog domain, and without the frequency-related benefits oversampling provides. Still, the proof is in the listening, which is what I’ll be doing with the Formula, along with learning much more about how it’s made and how it works.

EMM Labs’ DA2 is particularly interesting because it was designed by Ed Meitner, a legend of digital audio design who pioneered some of the digital technologies we take for granted today. As long ago as the late 1980s and early ’90s, when few knew what jitter was, Meitner, who has several digital-audio patents under his belt, was not only talking about jitter’s impact on sound -- he built the Logic Induced Modulation (LIM) detector to measure it. He also created reclocking circuits that, as implemented in his DACs and CD players, were shown to eliminate jitter completely. And when Sony and Philips developed the SACD, they hired him; hence his expertise with PDM processing. 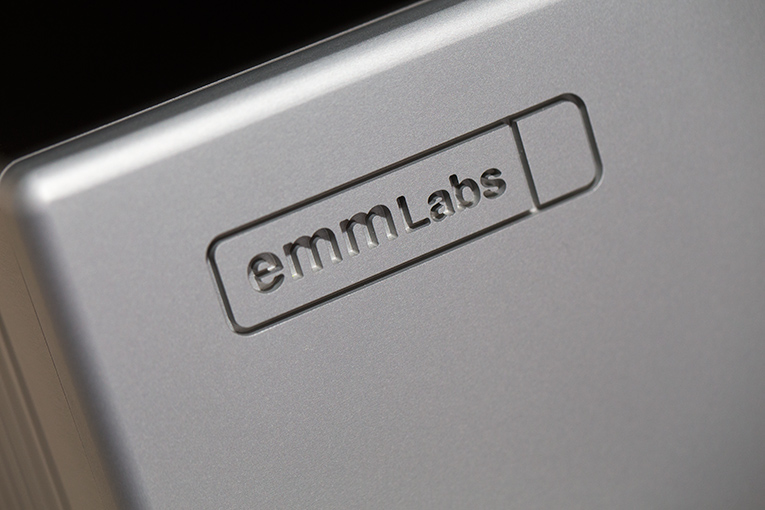 I consider Meitner a visionary. Here’s what he said in an interview with Robert Harley, published in the March 1993 issue of Stereophile:

One thing on my wish list is to have as much user-friendliness as possible within a digital audio system. As the system complexity grows, I can envision us ending up with a PC- or Macintosh-based audio system where the screen becomes the front panel of the system and is controlled by a trackball or mouse. Audio purchases would be made by software rather than hardware. Your system becomes an equalizer for the room, tuning different DAB [Digital Audio Broadcasting] stations, changing CD tracks, having a jukebox with a hundred CDs.

Doing all that ties neatly into a microprocessor-based package. You have the screen anywhere in the house where you want it and you access your system. To modify the frequency response, you draw a different curve on the screen. To me this would make a nice system in the near future. All of it is perfectly doable now.

Sound familiar? Perhaps it describes the computer-based system you have today. Meitner knows his stuff, and the EMM Labs DA2 represents everything he’s learned -- so far -- about digital audio. It employs all his cutting-edge technologies for jitter removal, upsampling, and digital filtering, but what most caught my eye was that its proprietary, single-bit DACs run at 16 times DSD’s original speed of 2.8224MHz -- at 45.1584MHz, or DSD1024. That’s fast. The goal of sampling at such high speed is to get the noise that results from the high sampling frequencies required for single-bit processing so far above the audioband that it becomes inconsequential, even for very-wideband amplifiers -- such as EMM’s MTRX and MTRX2 mono amps. 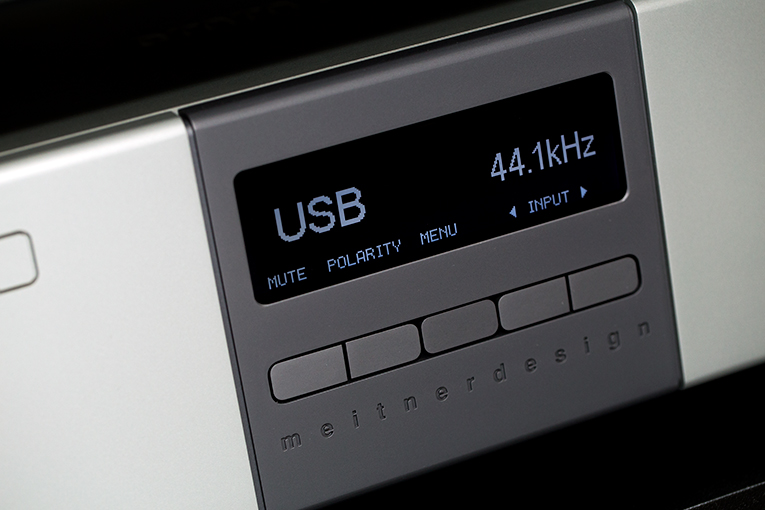 But why single-bit, particularly when there are so few single-bit DACs? A few years ago, when I talked to Meitner about this during a casual conversation at the Consumer Electronics Show, he went over what he felt were the pros and cons of all converter types -- over the decades, he’s worked with them all. He believes that, above all, listeners prefer the inherent linearity of single-bit converters over the inherent nonlinearity of multibit converters.

As the name implies, multibit converters use many bits to represent each digital word. Physically, this is accomplished by switching a number of resistors whose values need to be in precise relationship to each other. The problem is that, even with the most expensive resistors, there are always slight variations in these values, which means that no multibit system can ever be perfectly linear. In contrast, a single-bit system has one bit, so there are no problems in bit-to-bit relationships to deal with -- inherent linearity. 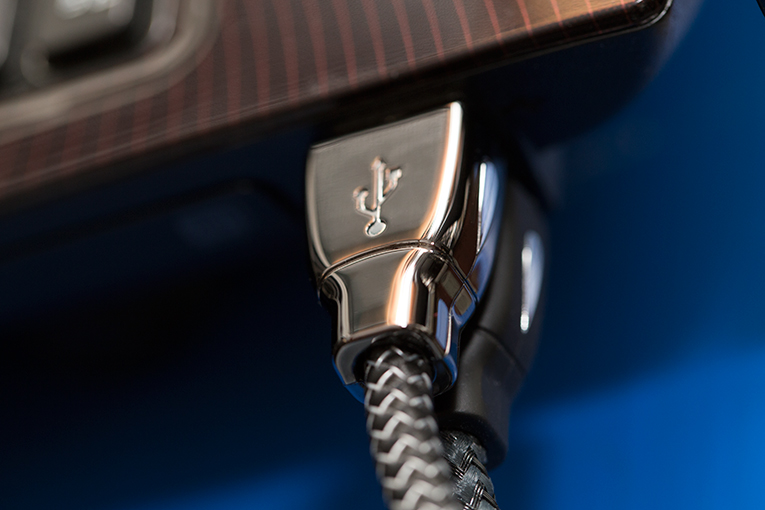 Aqua–Acoustic Quality and EMM Labs DACs represent the best efforts from both companies, and both use bespoke DACs. But the DACs themselves are very different from each other, and so, too, are their sounds -- not as different as two models of loudspeaker, but different enough to keep me interested as I review them. Right now, both are linked via USB to my Samsung laptop. Look for reviews of both DACs by year’s end.