Made in Canada! Axiom Audio and Totem Acoustic Insist on Making Affordable New Products at Home

Does it really matter where a product is manufactured?

It’s a question I often ask my audiophile friends, to learn if a product’s country of origin affects their purchasing decisions -- and lately, the topic has politically become a lot hotter.

As a reviewer of audio gear, I can’t get too hung up on where a product is made. What matter most to me are its levels of sound quality, build quality, and features for the price asked, and I’ve learned that these don’t much correlate with place of manufacture. But audiophiles’ answers to my question have told me that for many trying to choose which product to buy, it can be a different story -- many factors can enter a purchase decision, including country of origin.

Some have told me that they want to know where a product is made because they might want to support the manufacturing bases of some countries over others -- often, especially, their own country -- to keep the money within those economies. Conversely, they might want to know because they don’t want to support a particular country of manufacture -- or, based on previous experience or assumptions or mere prejudice, they think that any product made in that nation will be of bad quality.

Other buyers want to know where a thing is made because they want to be assured that if they buy a product from a company that has built its reputation on operating within a certain country, the product was actually made there and has not been outsourced for manufacture to some other nation. Think of Ferrari -- I’m sure their cars could be made in any number of countries, but would they have the same appeal if they weren’t made in Italy, which is part and parcel of the Ferrari brand? Likewise, would you want a Rolex made anywhere but in Switzerland? Or would anyone who’d read about Howard Kneller’s visit to Accuphase, recently published on SoundStage! Global, find that company’s electronics as desirable if they weren’t made in Japan? The list of companies intrinsically attached to their countries of origin goes on and on.

While audio manufacturers know that place of manufacture matters to many consumers, they’re often hamstrung by something even more important: their need to offer products at low retail prices. Since one of the biggest costs of manufacturing is labor, trying to produce a low-cost product in a country with high-cost labor makes it very hard to make a profit on those products. So manufacturers often look for ways to make them more cheaply, and that usually means making them in a country where the cost of labor is much lower. Low wages are what has made possible the exponential growth and enormous size of the manufacturing sector of the People’s Republic of China, where much of today’s electronics are made. 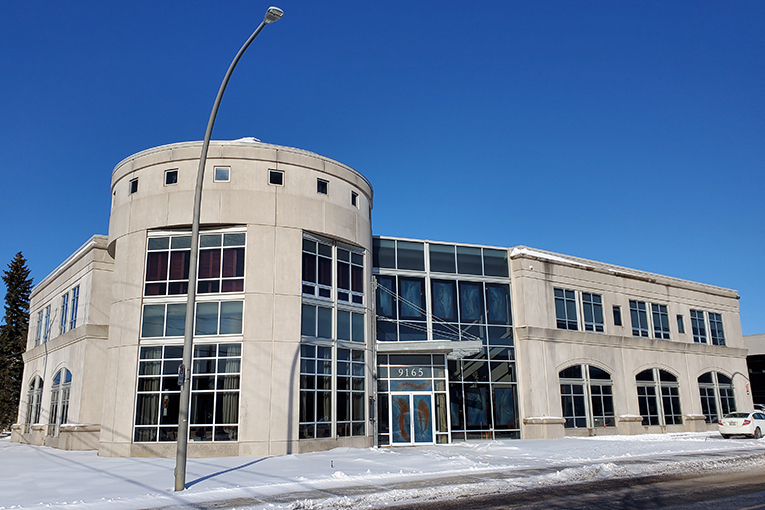 The topic of outsourcing manufacturing to other countries came up when I recently visited two Canadian loudspeaker companies to see their new products: Totem Acoustic’s Skylight minimonitor ($1000/pair, all prices USD), and Axiom Audio’s AxiomAir Freedom N2 all-in-one speaker ($529). Totem is based in Montreal, Quebec, and Axiom in Dwight, Ontario. Both companies have been in business since the 1980s and maintain factories in Canada, but from time to time have resorted to making certain models overseas, to keep retail prices low enough that consumers were willing to pay them. In fact, years ago, Axiom opened a small factory of their own in China.

During my visits I carefully examined and auditioned these new models from Axiom and Totem, and found their qualities of build and sound to be very high -- and their retail prices so low that I figured they must be made elsewhere, and probably in China. I was shocked to learn that, at the insistence of the companies’ founders, Vince Bruzzese of Totem and Ian Colquhoun of Axiom, both new models are made in Canada. Each company was able to do this by leveraging strengths it had built up over the years to offset Canada’s high cost of labor.

Although Axiom and Totem design and make products in different ways, I’ve visited both often enough to learn that they share some efficiencies of manufacturing processes. Colquhoun and Bruzzese not only founded but are still the chief designers of their respective companies, and each is intimately involved in every product his firm makes. Both were also savvy enough, early on, to invest in their companies’ infrastructures -- they own the buildings their offices and factories occupy, as well as all the equipment inside. This means they can work with their product designs to make sure they take full advantage of their existing resources and manufacturing knowhow, which results in improved efficiency. 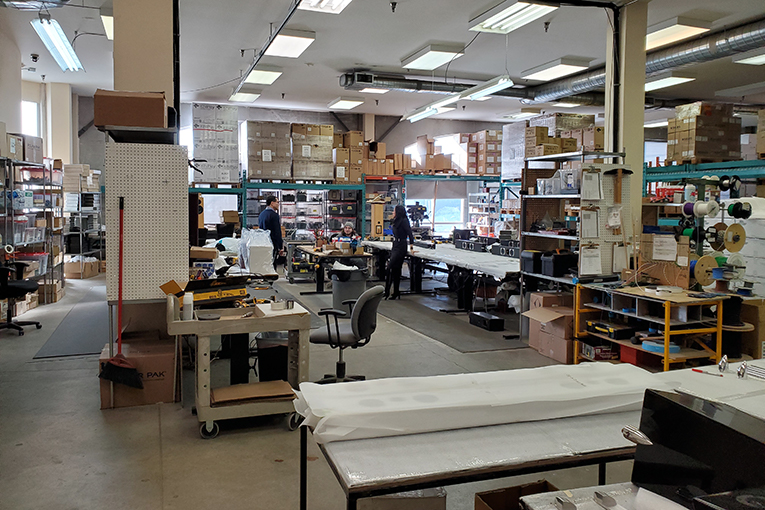 Totem doesn’t make its own speaker cabinets, but in more than three decades of making speakers has forged strong relationships with cabinetmakers in and around Montreal. So when Bruzzese firmed up the final design of the Skylight’s cabinet, he was able to call on a company that had already been making cabinets for Totem for some time, and was familiar with what Bruzzese does and doesn’t want. For instance, he’s a big believer in speakers with lock-mitered joins, which increase a cabinet’s strength, rigidity, and overall integrity. Sure enough, the Skylight has them. They were also able to offer three finishes: matte White paint and real-wood veneers of Black Ash (painted) and the reddish Mahogany veneer that Totem has been famous for since the debut of their first speaker, the Model 1, in 1987. The Skylight also has a magnetically attached grille. Missing, however, is a coat of the borosilicate paint found on the interior walls of more expensive Totem speakers, such as the Signature One. Bruzzese says that this paint also increases a cabinet’s rigidity, but would have raised the cost of manufacture too close to the retail price set for the Skylight; instead, he made sure that the speaker’s cabinet is well braced. 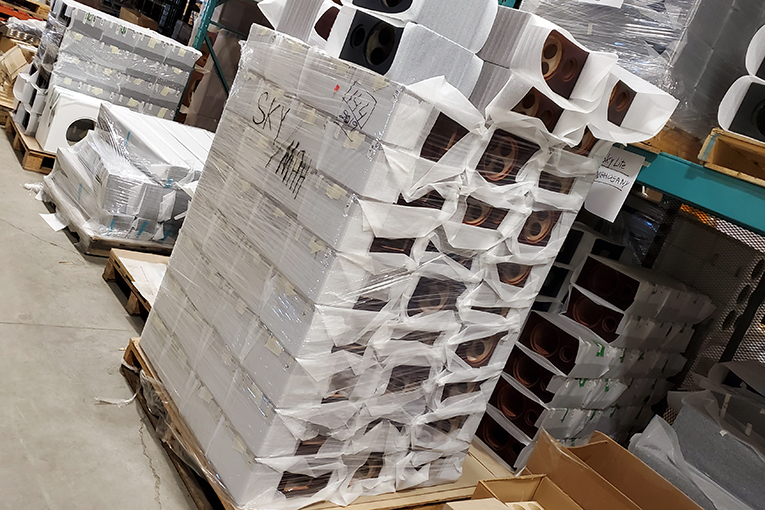 When the Skylight cabinets are completed by the cabinetmaker, they’re pallet-shipped to Totem’s factory in Montreal, where the final assembly is done alongside that of far more pricey Totem speakers. On the day I visited, I observed the production process, so I know it’s real. That same day, I took home with me a completed pair of Mahogany-finished Skylights to insert in my budget-friendly System One setup. My review will appear next month.

Axiom Audio’s factory does include a complete cabinetmaking section -- every “regular” Axiom speaker cabinet is made there -- but Axiom’s first all-in-one speaker, the AxiomAir Force N3 ($849), and now the AxiomAir Freedom N2 all-in-one ($529), both have cabinets of injection-molded plastic. Most companies outsource this sort of thing -- there are plenty of plastics shops that specialize in injection molding -- but Colquhoun believes in trying to make as much as possible in-house, to control every aspect of production for optimal quality and, in the long term, efficiency. When the Force N3 was designed, Axiom bought its own injection molder, as well as a laser engraver to incise the serial number on the metal badge affixed to each unit. As a custom option, they even offer special wording. Those investments have already begun to pay off, because now Axiom is using them to make the Freedom N2 -- and whatever else might follow. 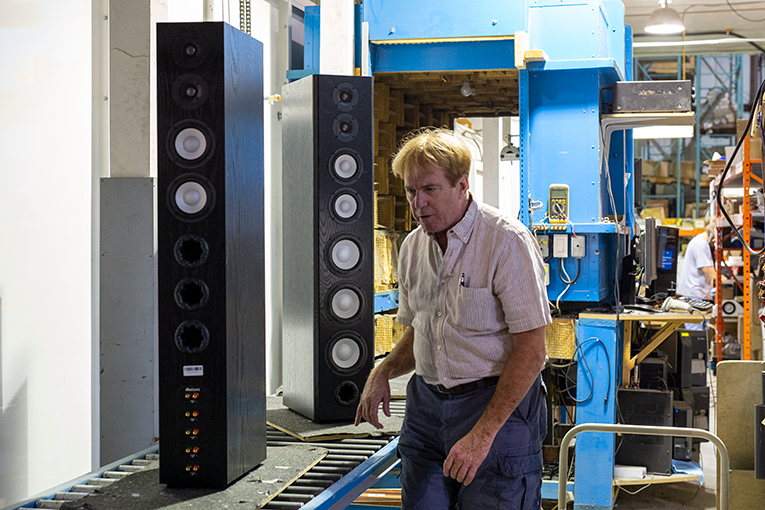 Nor did Axiom’s cabinet shop go entirely unused in the making of the AxiomAirs. The top plates of these otherwise plastic models are made of wood, and are finished in Axiom’s paint booth by Axiom’s painting crew, as are the cabinets. The N2 and N3 are offered with these top panels painted black or white, or finished in one of six real-wood veneers -- all for the same base price. And, as with the cabinets of their traditional speakers, custom finishes are possible. I doubt Axiom would be able to offer that kind of selection if they were having these models made overseas by third-party suppliers, who usually need minimum-order quantities and long lead times. 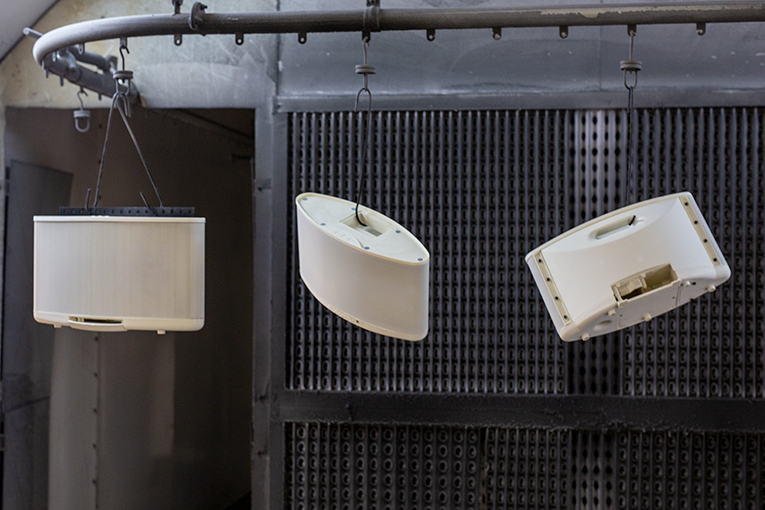 AxiomAirs in the paint booth

As if such levels of in-house manufacturing weren’t impressive enough, here’s something else I learned at Axiom: At about the time the N3 was taking off, Colquhoun began scaling back his operations in China, to produce at home in Ontario the drivers and crossover components he’d been making at Axiom’s Chinese facility. The electronics for the AxiomAir models are also built in Canada, as is the programming of its digital signal processing. It doesn’t get more “Made in Canada” than that -- which is what triggered me to write this article in the first place. 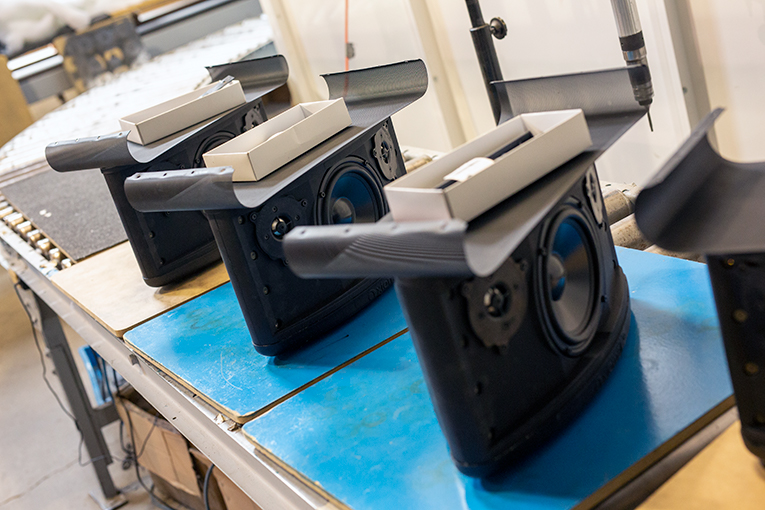 But Axiom and Totem are becoming anomalies in the rapidly changing world of high-end audio. It’s rare to find decades-old companies with so much manufacturing capability in-house or close by, and rarer still that the founders of these companies are still running them and still in charge of product design. Many of the companies founded in the 1980s or earlier went out of business long ago, or were sold to new owners, sometimes to become part of a collection of brands under a single corporate umbrella. Yet Axiom and Totem have survived on their own, and now have well-established physical plants and manufacturing processes that have allowed them to produce these new products in-house while remaining competitive. 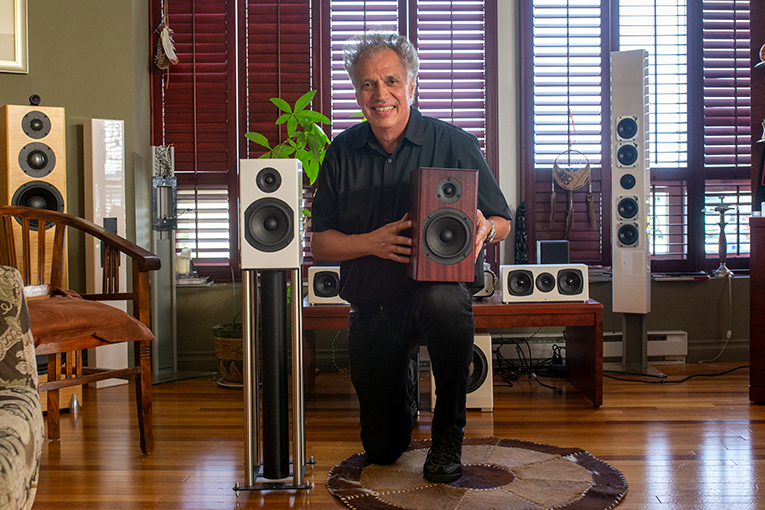 Those who care where audio gear is made and want something made in Canada should be pleased by what Axiom Audio and Totem Acoustic have accomplished in the AxiomAir Freedom N2 and Skylight. But those who don’t care should be just as pleased -- regardless of where they’re made, these products come from companies that take great care with what they make. And that, to me, is what matters most.