Bryston: How a Devastating Death Led to a New Lease on Life

On Saturday, September 26, 2020, Brian Russell, Bryston’s president, died in his sleep. He was 68 years old. For the hi-fi world, the news of his death came primarily from James Tanner, VP of marketing for Bryston at that time, through various online outlets. In a post on the Canuck Audio Mart forum on September 28, Tanner wrote: “I worked with Brian for over 45 years and he was the most kind and caring individual I have ever known. He came across as a rough gruff bear of a guy but deep down he had the emotions of a teddy bear.” 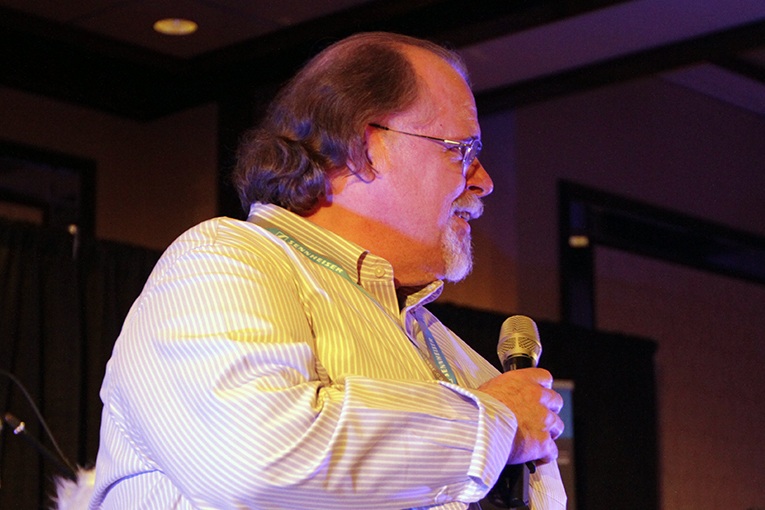 I phoned Tanner a few days after Brian’s passing. He told me that the news of Brian Russell’s death had understandably shocked Bryston’s employees. Within the hi-fi industry, where Brian was well known, the news was met with surprise and sadness—no one saw his passing coming, and everyone I knew who knew Brian liked him. I was certainly sad to hear the news. Over the last ten years, I’d gotten to know Brian quite well and found him to be kind, genuine, helpful—and sarcastic as hell. He had a dark sense of humor, just like mine, as I learned on the day he took me out for dinner at Candide, a restaurant in Montreal co-owned by his son John.

Once the news of Brian’s death sunk in, I think most within the industry knew that there would be some sort of shakeup at the Canadian hi-fi company—famed for its robust amplifiers—because of the influence Brian had had there. But I don’t know if anyone foresaw the trajectory that Bryston, which at the time was based entirely in Peterborough, Ontario, Canada, would soon take. I know that I never saw what was coming next. 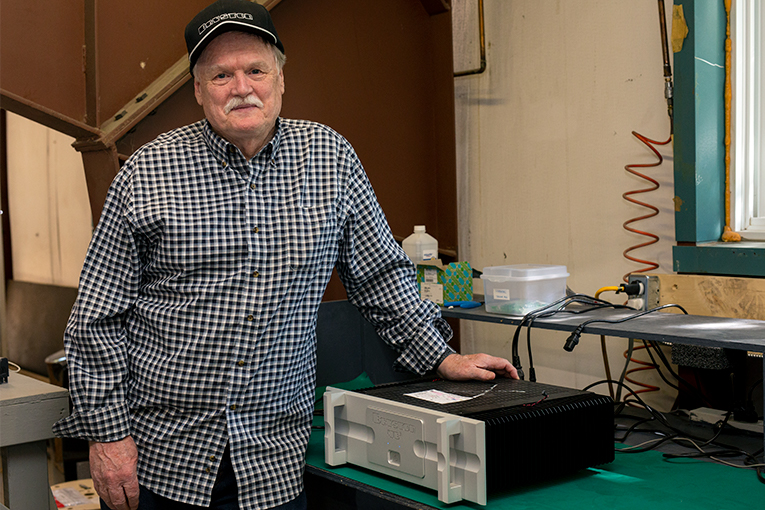 James Tanner with a Bryston 4B3 amplifier being burned in

This August, I met up with Tanner in Dwight, Ontario, to discuss all that had happened from September 2020 until now. According to Tanner, Brian’s brother Chris decided it was time for him to retire from the company when Brian died. That, too, must’ve sent shockwaves through the company. CEO of Bryston at the time and several years older than Brian, Chris’s tenure began before his brother’s—Chris is the person who got Bryston to start producing hi-fi products, back in the early 1970s. He designed the Pro 3, the amplifier that started it all for the brand. Prior to that, Bryston had been making blood analyzers for the medical industry (the company was incorporated in 1962, and had been purchased by John Russell, Chris and Brian’s father, in 1968). After Chris’s success with the Pro 3 and the other audio products that soon followed, Bryston switched production solely to hi-fi components, with Brian joining the company full-time in 1979, followed by James Tanner in 1982.

When Chris announced his retirement, he first suggested that Tanner buy out his shares. But Tanner told me he didn’t want to go all in by himself, because he felt that he didn’t possess the right skillset to run the company solo. He approached Ian Colquhoun, owner of Axiom Audio, about partnering with him on the purchase. He knew that Colquhoun would be a good partner, partly because he’d been running Axiom Audio successfully since 1980, but also because of the business relationship the two had established nearly ten years ago when Axiom Audio started making Bryston’s loudspeakers, beginning with the Model T floorstander. He knew that, together, they could run Bryston successfully. 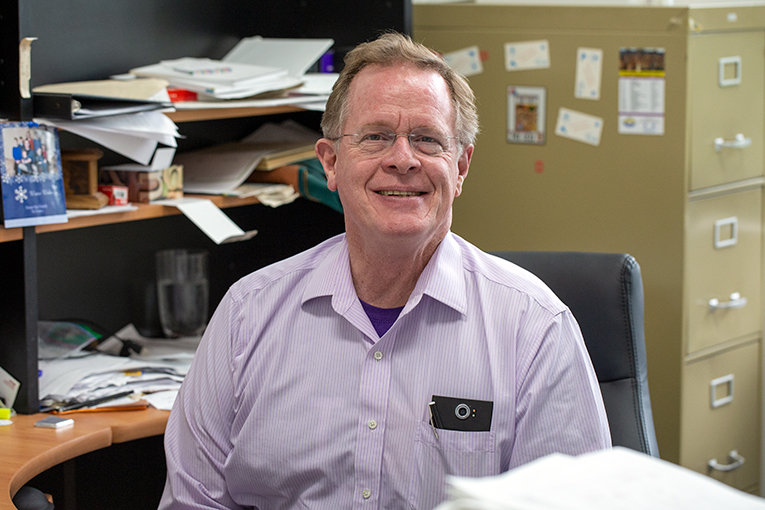 Colquhoun already had tremendous respect for the company, and he could see how purchasing Bryston would not only allow the brand to stay viable, but also mean that he could help to develop it. It didn’t take long for him to tell Tanner that he was in.

I actually learned a bit about the deal on the day that the transfer of shares to Colquhoun and Tanner was solidified, which was in late 2020. I had called Colquhoun on a matter relating to Axiom Audio, but when he picked up the phone, I could tell he was driving somewhere, so I asked, “Is it a good time to talk?”

“What are you doing there?” I inquired, figuring that it would have something to do with the loudspeakers.

“I’m going to buy the company,” he said, with matter-of-fact seriousness.

I could tell he wasn’t joking. Colquhoun and Tanner bought Bryston that day, and the hi-fi world heard the surprising news a few weeks later. 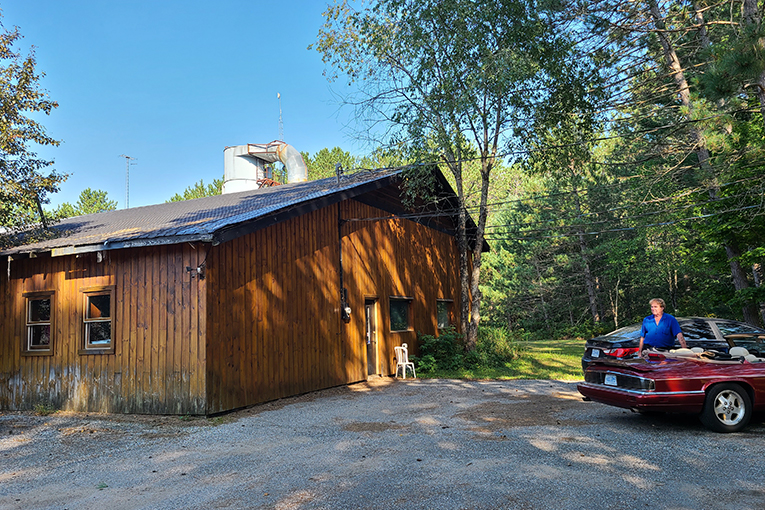 Ian Colquhoun in front of his factory in Dwight, Ontario

With Colquhoun and Tanner now in control, Tanner became CEO and Chris Russell retired. Chris stayed on at Bryston as a consultant, which demonstrates how much commitment he had—and still has—to the brand. In fact, Tanner told me that Chris still shows up at the office “all the time,” which doesn’t surprise me, since no one who accomplishes what he did and has been in the game as long as he’s been in it could let it all go in an instant.

But the day-to-day operations of the company, as well as its future direction, are now in the hands of Tanner and Colquhoun. Both were present at that August meeting in Dwight, and they told me that as soon as they took over at Bryston, they were determined to avoid taking any action that would harm the brand’s sterling reputation, built up over the decades. So they knew they had to respect things like the company’s outstanding engineering department, the high level of product quality, and that legendary 20-year warranty on its electronics. 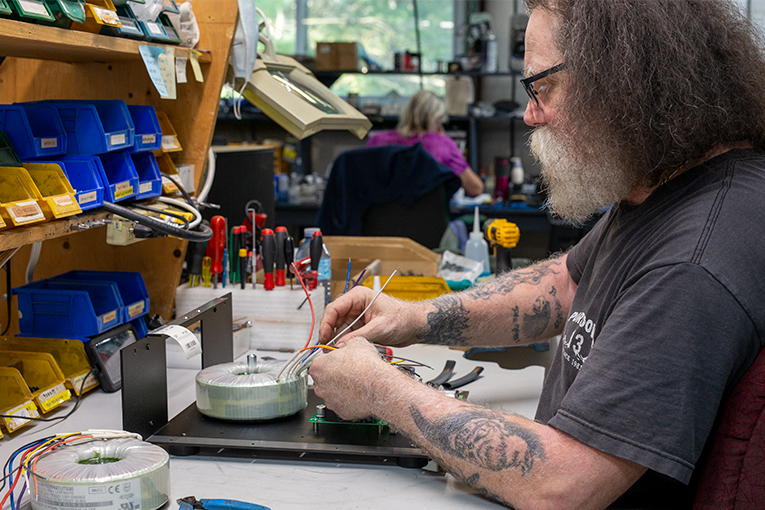 Building a Bryston in Dwight, Ontario

I also learned that they didn’t want consumers to confuse the brands, since Axiom Audio primarily sells its products online, while Bryston relies on traditional bricks-and-mortar retailers. So the brands needed to stay distinct, as did their sales channels. But both men knew that there were things they could do to make Bryston even better than it was, though to do so meant bringing part of the company up to Dwight, Ontario, where Axiom Audio is located. Which is why I met them there.

Tanner told me that when Bryston was operating solely out of the Peterborough facility, it was “acting more as an assembler than a manufacturer.” He explained that, in Peterborough, the company was getting most of the major parts—chassis, faceplates, circuit boards, and the like—from outside venders, then assembling them into final products. In contrast, Axiom Audio’s existing facility already had more robust manufacturing capabilities than Bryston’s. Now, some of the items that had been outsourced are being made in the Dwight facility, giving Bryston better control over quality, among other benefits. And over time, the partners told me that they’ll be investing in more equipment to bring even more of Bryston’s parts manufacturing in-house. Colquhoun summed it up by saying, “We don’t have trouble building stuff in Dwight.” 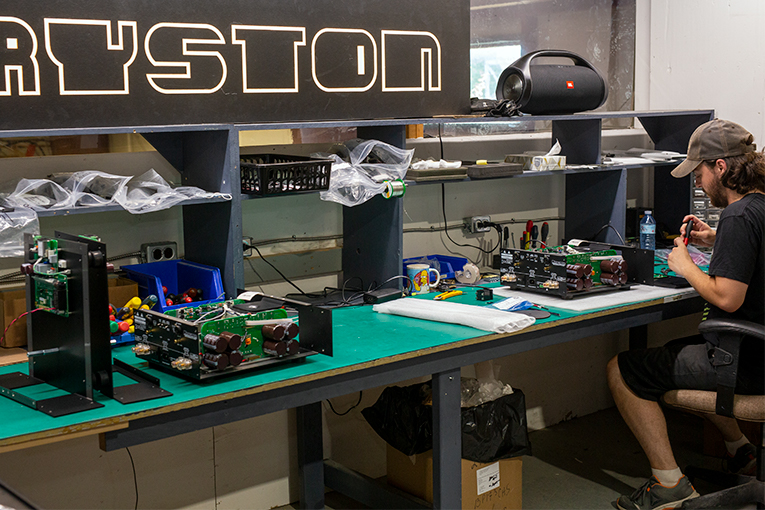 As a result, Bryston is now split across two locations, which, I was told, will be the case for the foreseeable future. The main office plus the R&D and service departments remain at the original Peterborough location, while the products are being made at Axiom’s Dwight facility—something Colquhoun calls a “super-factory for making hi-fi equipment”—where there’s now an entire floor dedicated to the manufacture of Bryston products.

Tanner told me that moving manufacturing to Dwight has brought other benefits he didn’t anticipate. One improvement is in parts inventory. He confessed to me that in Peterborough, Bryston had a rudimentary system for tracking, stocking, and ordering parts, and the company often ran out of things they needed at crucial times. He explained that, many years ago, Colquhoun had custom-designed a much more sophisticated inventory management system for Axiom Audio, which can predict parts usage for up to six months ahead. Moving to this system, Tanner told me, has already improved Bryston’s production immensely by reducing manufacturing downtime.

Quality control has also been improved, mostly due to the work of Andrew Welker, chief engineer at Axiom Audio for over ten years, who now holds the title of Chief Product Officer, both for Bryston and Axiom Audio. Basically, he oversees how every product at the joint manufacturing facility gets made. 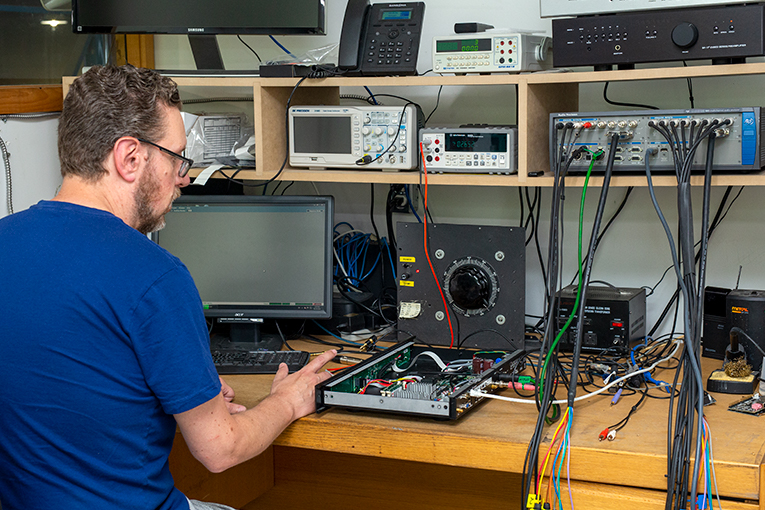 The main thing that Welker has done to improve Bryston’s quality control is to fully automate the function-testing process, which is on top of the 100-hour burn-in testing for reliability that every component receives. Tanner told me that a complex product such as the BR-20 would take hours to test in the Peterborough location, but now they can test it with Andrew’s system in less than 20 percent of the time—and without compromise. According to Welker, when I talked to him about quality control, the systems he has in place guarantee that any product that goes out the door will meet or exceed Bryston’s published specifications.

Tanner also told me that there have been other improvements to the manufacturing process, which, when combined with the other changes I’ve described, have allowed Bryston to increase product output by 50 percent compared to what was being achieved in Peterborough, with no sacrifice in quality. He also said that new products like the BR-20 can be put into production quicker than before because of the improved manufacturing capabilities that the Axiom connection brought. He added: “These improvements have given me and Bryston a new lease on life, particularly with the different products that can now be produced. We have lots more freedom—and lots more to come.” 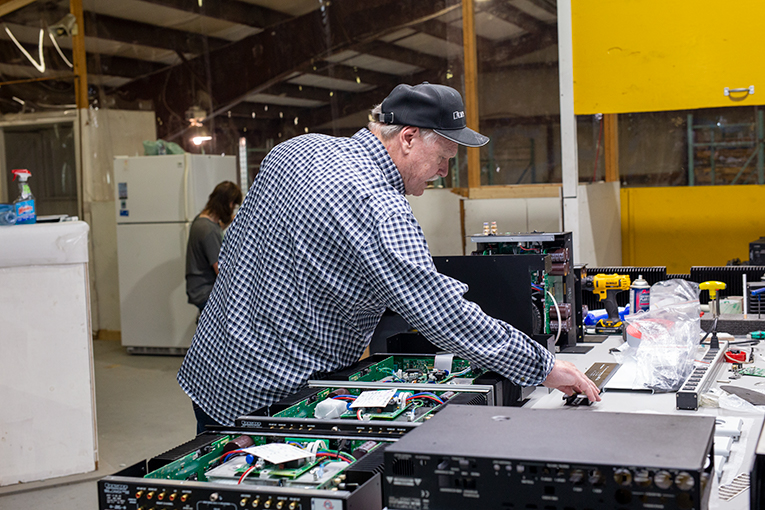 Tanner checking out production at the Dwight facility

When he said those words, there was excitement in his voice, which I not only found encouraging, but also inspiring. James Tanner is now 74, though you wouldn’t necessarily know it given the energy he has—not to mention that he still plays hockey, like a true born-and-bred Canadian. So he’s still raring to go and ready to take big steps with his new role at Bryston. Having learned about his leadership, along with Colquhoun’s involvement and commitment to improve the brand, I left that meeting in Dwight confident that the Bryston the hi-fi world has known for almost 50 years will flourish for decades to come. And from what I knew of Brian Russell, he’d be proud of the direction Bryston is taking.