Until now, the lowest-priced floorstanding speaker in our list of Recommended Reference Components was the KEF R500 ($2599.98 USD/pair), reviewed in August 2012, and added to the list the following month. Hans Wetzel’s review of the KEF Q750 loudspeaker ($1499.98/pair), published in February 2018 on SoundStage! Access, changes that. In his review, Hans wrote of the Q750: “It’s one of the most neutral transducers I’ve ever heard, and for the money offers staggeringly transparent sound.” The Q750 is the middle of three floorstanding models in KEF’s newest range, the Q Series, now in its eighth generation -- above it is the larger Q950 ($1799.98/pair), below it the smaller Q550 ($1099.98/pair).

Like almost every hi-fi speaker now made by KEF, the Q750 is based on their Uni-Q driver technology. Uni-Qs are coaxial drivers; each one comprises a tweeter operating inside the cone of a midrange or midrange-woofer driver. This is done so that the soundwaves generated by the two drivers emanate from the same point in space, to make their combined output a “point source” of sound. (Only KEF’s lower-priced C models still use discrete tweeters and midrange or midrange-woofer cones.) The Q750’s Uni-Q has a 1” dome tweeter and a 6.5” midrange-woofer, the latter left unfiltered on its low end, to extend its output as low in the bass as possible. To add to the midrange-woofer’s bass to increase extension and output, the Q750 also has a 6.5” woofer augmented by two 6.5” passive radiators. 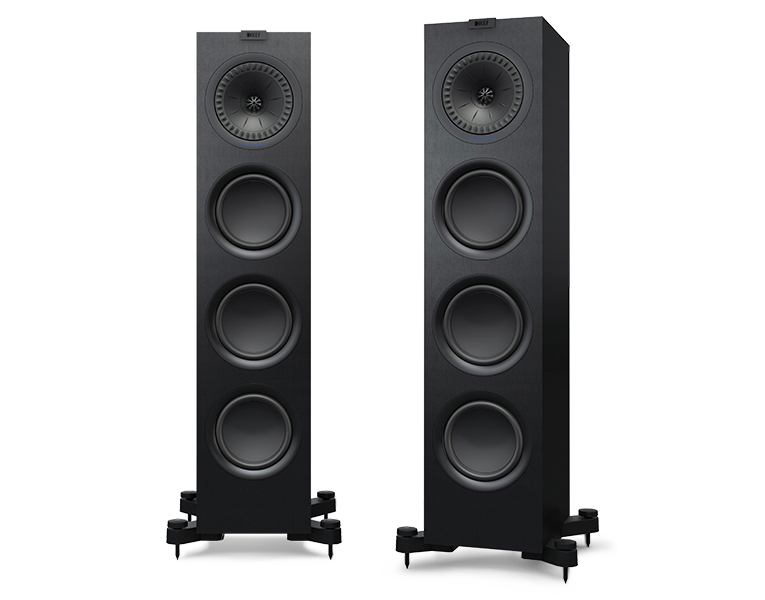 To keep costs down, the Q750’s MDF cabinet is, as Hans described it, “fairly light and hollow” (the speaker weighs just 36.4 pounds), and is available in veneers of black or white vinyl. “Overall, it’s a clean- and modest-looking loudspeaker,” he said. (Real-wood veneers and high-gloss piano lacquers are available for KEF’s R models, the next step up from the Qs.) Grilles, which are not mandatory, and are not recommended for critical listening, are available as options for $79.98/pair.

I was struck by how little difference I heard. Indeed, above about 45Hz, the Q750s sounded remarkably similar (the R700s’ bass goes considerably lower). With “The First Nowell,” from Ola Gjeilo’s Winter Songs (16-bit/44.1kHz FLAC, Decca/Tidal), I was blown away by the sheer clarity of the Royal Holloway Choir. The solo chorister at the center of the soundstage was superbly holographic, sounding pitch-perfect in time and space. The same went for the rest of the choir that fills the soundstage.

Hans then delivered a testament to the Q750’s neutrality:

I found myself struggling to identify a signature of any kind that the KEFs were imposing on my music. I heard no hump in the upper bass, and none of the upper-midrange emphasis I’ve noticed in the sounds of many other speakers I’ve recently reviewed. . . . To say that the Q750 is a well-designed transducer is a massive understatement: within their limits, I found them nearly flawless.

Hans also owns a pair of KEF LS50s, which have the same list price as the Q750s. However, the LS50 is not a floorstander but a minimonitor -- unless placed on a shelf of some kind, it requires stands. (The LS50 was added to our list of Recommended Reference Components in August 2013.) The LS50 is a small two-way design and lacks deep bass, but Hans and other reviewers have lauded it for its realistic reproduction of voices, particularly women’s. When he compared the two pairs of KEFs, he found not only that the Q750 was a little more neutral across the midrange than the LS50, but that “The Q750s’ reproduction of women’s voices sounds every bit as good as the LS50s’.”

Hans also compared the Q750 to the almost identically priced Elac Uni-Fi Slim FS U5 ($1499.96/pair), another floorstander with a coaxial driver, this one comprising a 1” soft-dome tweeter at the center of a 4” aluminum midrange cone, and crossed over to three 5.5” aluminum-cone woofers (the Uni-Fi Slim FS U5 is a true three-way speaker). Although Hans’s high praise for the Uni-Fi Slim FS U5 in his December 2017 review led to its winning a Reviewers’ Choice award, and he found the two speakers’ bass presentations similarly “competent and unobtrusive, if not particularly deep,” overall he preferred the sound of the Q750:

In comparison to the Elac, the KEFs threw out a significantly larger soundstage and were totally uncolored from top to bottom. They were also more transparent to recordings. The Elac’s smoother-sounding tweeter tended to subtly gloss over the finest details; the KEF’s did not. The same can be said of the FS U5’s midrange, which sounded more nebulous than the Q750’s hyper-accurate midband -- male voices in particular sounded a bit dulled.

Hans summed up his experiences with the Q750: “It’s not exactly a looker, but it’s well engineered, and sounds far more expensive than its price suggests. If I had $1500 to spend on speakers, this is what I’d buy.” We, too, can heartily recommend the KEF Q750 -- it’s now the lowest-priced floorstander on our list of Recommended Reference Components.