Vinyl isn’t the only audio sector that’s resurging these days -- integrated amplifiers, too, are back in style. But today, those who demand integrateds want much more than a preamp and power amp in a single box. They want not only the high power and sound quality of separate components, but also lots of features, digital and analog.

Enter Anthem’s STR integrated amplifier-DAC ($4499 USD), which Roger Kanno reviewed for SoundStage! Hi-Fi last month. As Roger learned, the STR gives up little to separates in terms of power output and sound quality -- and its feature set can’t be matched by most other integrateds, or even separates. 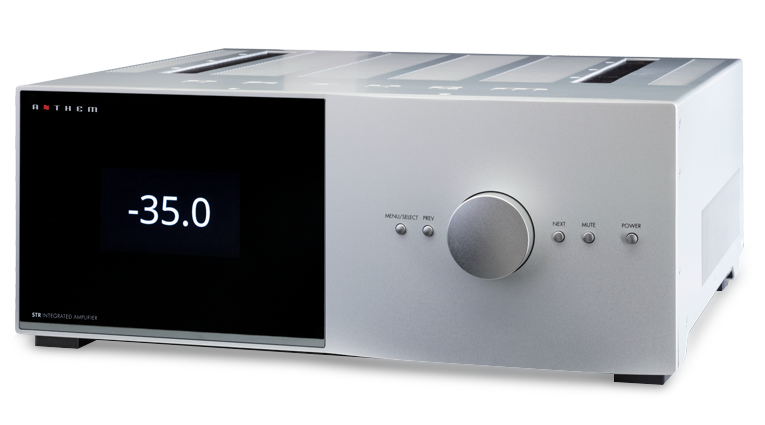 The STR’s power-amp section builds on Anthem’s 20-plus years of making solid-state, class-AB amplifiers, including the popular P2 and P5 models. The STR is specified to produce 200Wpc into 8 ohms, 400Wpc into 4 ohms, or 550Wpc into 2 ohms, and it features Anthem’s Advanced Load Monitoring, which continuously assesses the amp’s operating status, and shuts it down should a fault occur. The preamp stage builds on expertise Anthem gained in designing and building such products as the D2v preamplifier-processor (Roger owns the D2v’s predecessor, the D2), but the STR’s more advanced DAC section supports resolutions up to 32-bit/384kHz PCM and 5.6MHz DSD. The STR also includes features never before seen in an Anthem product: a phono stage that supports moving-coil and moving-magnet cartridges (their 225 integrated supported only MM), dual subwoofer outputs, and bass management for using one sub or two.

The STR’s analog inputs are plentiful: besides phono, there are four single-ended (RCA) and one balanced (XLR). In Analog Direct mode, the STR will pass signals from these inputs through to the speaker terminals without their ever leaving the analog domain; but switch Analog Direct off and those signals are digitized to 32/192, to take advantage of the STR’s digital signal processing (DSP) functions. These include ARC-2, the latest version of Anthem Room Correction (ARC), the proprietary room-correction system that Anthem began developing almost 30 years ago. 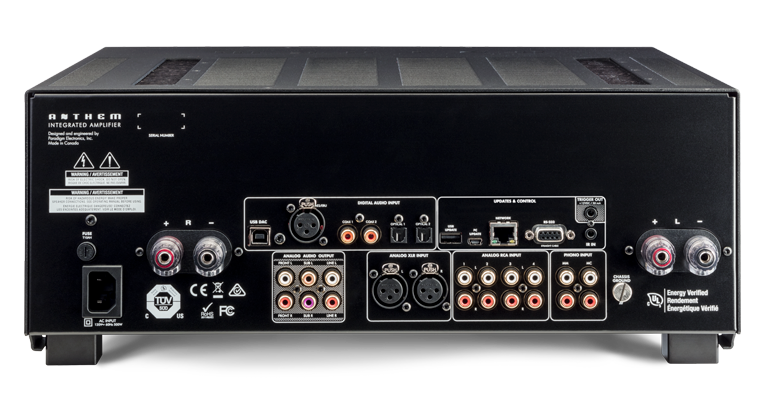 The STR has six digital inputs: two optical (TosLink), two S/PDIF coaxial (RCA), one AES/EBU (XLR), and one USB. Incoming digital signals of resolutions lower than 32/192 are all upsampled to that resolution, and of course can also take advantage of ARC-2. Should you, like Roger, have more than one pair of speakers, ARC-2 can retain up to four discrete speaker-profile settings. ARC-2 is powerful, but to Roger, “The process was quick and easy; I was up and running in minutes.”

Of the Anthem STR’s sound, Roger wrote that it was “damn good right out of the box, but even better after ARC-2 had done its stuff.” His advice: “Unless you have a really good-sounding room to start with and are meticulous in setup, not to use ARC is not to use the STR Integrated to its full potential.”

Roger continued to enjoy the sound quality with ARC-2 engaged:

Whether with the MartinLogan Masterpiece Classic ESL 9s or the Persona Bs with two subwoofers, activating ARC-2 allowed the STR to play at any volume level, from very low to extremely high, with absolute composure and coherence throughout the entire audioband. I could sit back and listen to Lorde’s Melodrama (16-bit/44.1kHz FLAC, Universal) at moderately low levels and let her ironic lyrics flow effortlessly around me. Even at these levels, “Green Light” had a solid beat, and I could hear her every vocal inflection, even when overlaid by a chorus of backing singers.

Nor did Roger find the STR a slouch in terms of sheer power output: “The authority the STR Integrated with ARC-2 exerted over the ML Classic ESL 9s’ four 8” woofers and two electrostatic panels was beyond reproach, but the Anthem also extracted fulsome amounts of bass from my Paradigm Persona B bookshelf speakers without sounding the least bit bloated.” He was also “impressed by the Anthem’s composure with ‘The Game Has Changed’ [by Daft Punk, from the Tron: Legacy soundtrack (16/44.1 FLAC, Walt Disney)], which has some scary-loud drumming interspersed with buzzing electronic tones that simply refused to distort, even at insanely high volume levels. With the ML Classic ESL 9s and the STR Integrated, the drum whacks were startlingly loud, yet started and stopped with extreme precision, and remained in perfect balance with the rest of the music.” 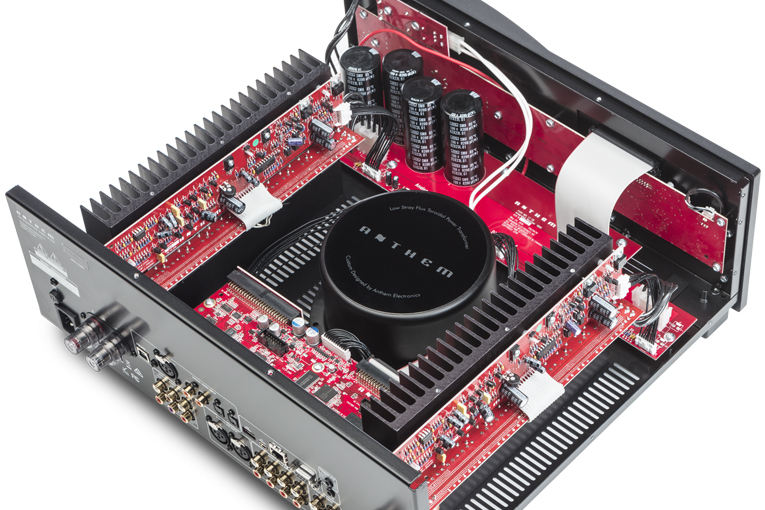 The Anthem STR wasn’t all about high power and bombast. When Roger played “Homesick,” from Dua Lipa’s Dua Lipa: Deluxe (16/44.1 FLAC, Warner Bros.), he found that the piano “was more forward in the mix than the piano in Lorde’s ‘Green Light,’ but it had a beautifully resonant quality that provided a great sense of depth, and the purity of the vocals was exquisite.” In that same track, “the sound of [Lipa’s] heartfelt singing was nicely blended with Chris Martin’s backing vocal, with touches of sweetness and liquidity that I didn’t expect to hear from such a powerful solid-state amplifier.”

When Roger pitted the STR against his Anthem separates -- the D2 preamplifier-processor ($7500 when available) and M1 mono amplifiers ($7000/pair) -- he determined that the STR “provided nearly the same sound quality and increased functionality, at least with stereo sources.” However, he noted that the STR “did sound a bit leaner than the D2-M1s combo, but not objectionably so,” and that the sound “was a touch more forward with the STR Integrated, which gave such pop songs as ‘Every Day I Write the Book,’ from Elvis Costello’s Punch the Clock (16/44.1 FLAC, Columbia/Rhino), an exciting immediacy.” 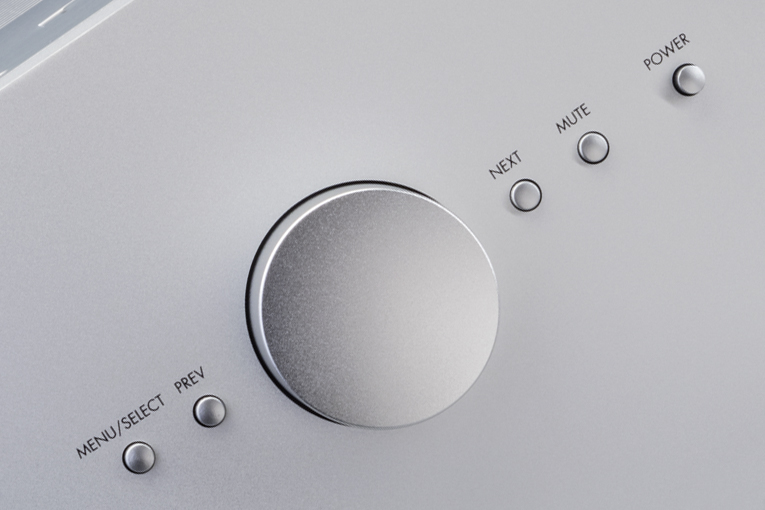 In his “Conclusion,” Roger declared that Anthem’s STR “takes the concept of the integrated amplifier-DAC about as far as it can go. If you’re open to the idea of subjecting your system to room-correction software, including the use of bass management for subwoofers, I can think of no better way to achieve reference-quality sound than by buying an STR. . . . [I]n the time the STR Integrated spent in my reference system, its performance never left me wanting more. I can’t recommend this unique product highly enough.”

Neither can we -- particularly at its very reasonable asking price of $4499. Anthem’s feature-rich STR integrated amplifier-DAC is the newest addition to our list of Recommended Reference Components -- and the very first Anthem product to be listed there.