Luxman’s L-509X integrated amplifier ($9450 USD) has a phono stage, and a faceplate that showcases its retro styling and old-school features: output meters, tone controls, even a loudness control. It may lack a built-in DAC, but its sound quality doesn’t bow to current-day competitors, nor does it cede first place to separates. In his SoundStage! Ultra review of March 1, 2019, Jeff Fritz said that he couldn’t “think of a commensurately priced combo of separate preamp and power amp that I’d prefer.”

The striking-looking L-509X measures 17.3”W x 7.6”H x 18.2”D and weighs 65 pounds. Jeff appreciated in the L-509X the same sorts of things other SoundStage! writers have liked about other Luxman products we’ve reviewed. It has “a precision feel that underscores its quality of assembly, parts, and industrial design. It makes you want to operate it not with the remote control, but up close and personal, the old-fashioned way: at its front panel, pushing buttons and twisting knobs. . . . For almost ten grand, you should expect superior build quality and attention to detail, and that’s exactly what Luxman provides in the L-509X.”

Luxman specifies the L-509X’s power output as 120Wpc into 8 ohms or 220Wpc into 4 ohms, with no more than 0.06% distortion from 20Hz to 20kHz. As Jeff wrote, “it should be able to drive all but the most power-hungry speakers.” For his evaluation he used pairs of EgglestonWorks Kiva and Monitor Audio Studio loudspeakers, along with his usual reference components and cables.

Jeff first listened to the L-509X through the EgglestonWorks Kivas: “The first characteristic I could put an ear on was the L-509X’s gorgeous midrange. I listened to ‘Big Picture,’ from London Grammar’s Truth Is a Beautiful Thing (24-bit/44.1kHz FLAC, Ministry of Sound/Qobuz), and considering what was emanating from the Kivas, the album’s title was apt. Hannah Reid’s voice was as pure as the driven snow. . . . The air around Reid’s voice was also audibly revealed -- it seemed real enough to inhale.”

Listening to “Piano/Drum Episode,” from Joe Lovano’s Trio Tapestry (24/96 FLAC, ECM/Qobuz), Jeff “marveled at how deeply I could hear into this music.” He also commented that he “could easily differentiate the nuances in Carmen Castaldi’s cymbal work, even as I reveled in the decay of each stroke.” 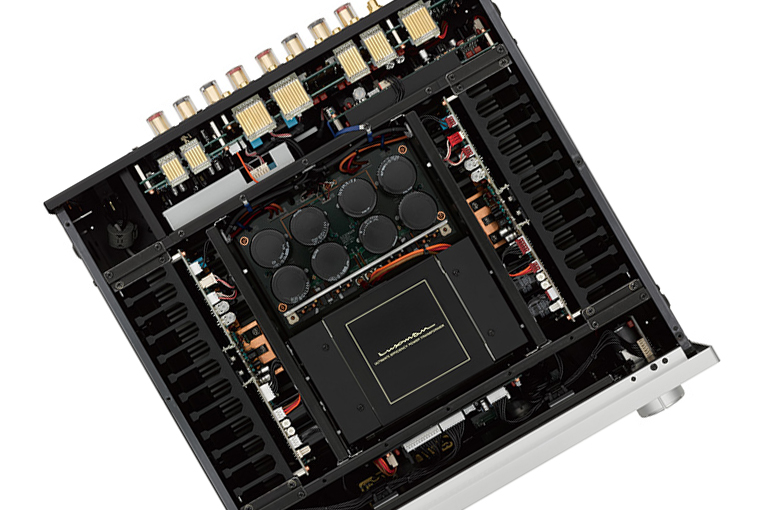 [T]he power of Castaldi’s drum intro in the first five seconds illustrated the Luxman’s ability to kick it up a notch. I listened to this track several times, each time at a higher volume. The L-509X maintained its composure at every level, and its control of the Kivas’ woofers never faltered. More important, the beautiful tone of the piano about 90 seconds in also retained its quality. This told me a couple of things. First, the Luxman could deliver the power needed to get loud, at least with speakers like the Kivas. Second, it could do so without changing its character as it delivered more juice. And that character was the character of the music itself: The L-509X revealed the gestalt of the performance and its details.

Listening through the Monitor Audio Studios with their Air Motion Transformer (AMT) tweeters, Jeff heard this: “Despite the increased energy in the highs and the decreased energy in the bass and lower midrange, the Monitors remained completely listenable, and I experienced nary a hint of listening fatigue. . . . The L-509X also admirably controlled the little Studios’ woofers, producing healthy dollops of tight midbass that added some meat to the music’s bones.” 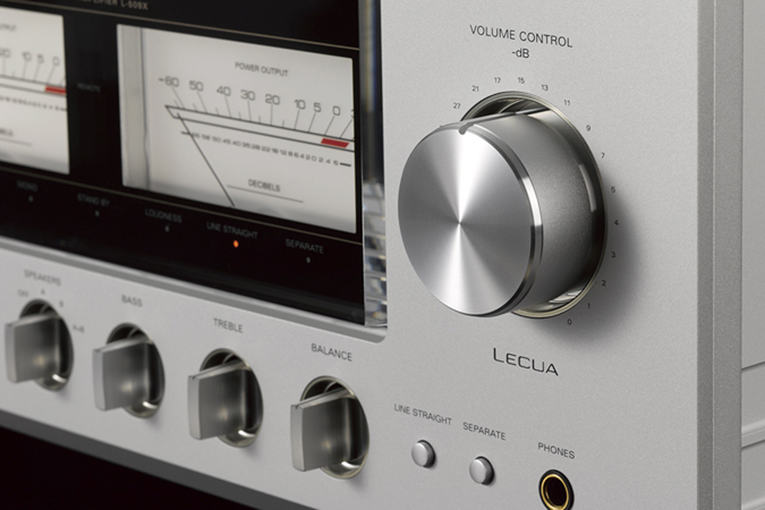 The Luxman didn’t sound as vivid as the T+A, but countered with a great listenability that I think would mate it to more speakers. Downstream from it, the T+A wants the best; the Luxman made the best of what I gave it. Depending on the associated equipment, either quality can be a strength.

The Luxman was closer in sound to the McIntosh MA9000, with differences. The Mac wore its power on its sleeve, never failing to sound in-the-moment and power-packed. The Luxman never failed to produce enough power for any situation I put it in, but was content to show its muscle only when it was called for. Call its sound a bit more relaxed.

Jeff summed up: “The Luxman L-509X is a beautiful component that produces beautiful sound. Sonically it does it all, in a way that doesn’t draw attention away from your favorite recordings; and in terms of user enjoyment, it will draw you right to it. . . . I can easily imagine glancing at it five or ten years later and finding that it still brought a smile to my face -- very rare in high-end audio circa 2019.”

Desirable in every way, Luxman’s L-509X is the latest integrated amplifier to be added to our list of Recommended Reference Components.