In 2012, UK loudspeaker manufacturer KEF released the LS50 loudspeaker, which Doug Schneider reviewed for this site in April 2013. The LS50 received a Reviewers’ Choice award at the time of the review, was further recognized as a Recommended Reference Component in August 2013, and was one of 2013’s Products of the Year. In October 2020, KEF released the LS50’s successor, the LS50 Meta. Doug reviewed it last month, and it too received a Reviewers’ Choice award. The LS50 Meta is priced the same as the original LS50 was in 2012 ($1499.99 per pair, all prices USD), and, according to Doug’s review, deserves similar praise.

Except for the new matte finishes -- Royal Blue Special Edition, Mineral White, Titanium Grey, and Carbon Black -- and its rear-mounted port opening now being “racetrack” shaped instead of a true oval, the LS50 Meta’s cabinet, which measures 12″H × 7.9″W × 12.2″D, is essentially the same as the LS50’s. Doug explained in the review that when visiting KEF’s Maidstone, Kent, headquarters in March 2020, Dr. Jack Oclee-Brown, the head of KEF’s R&D department, told him that when the design team examined the cabinet, they found nothing about it that they could significantly improve, so they pretty much left it alone. 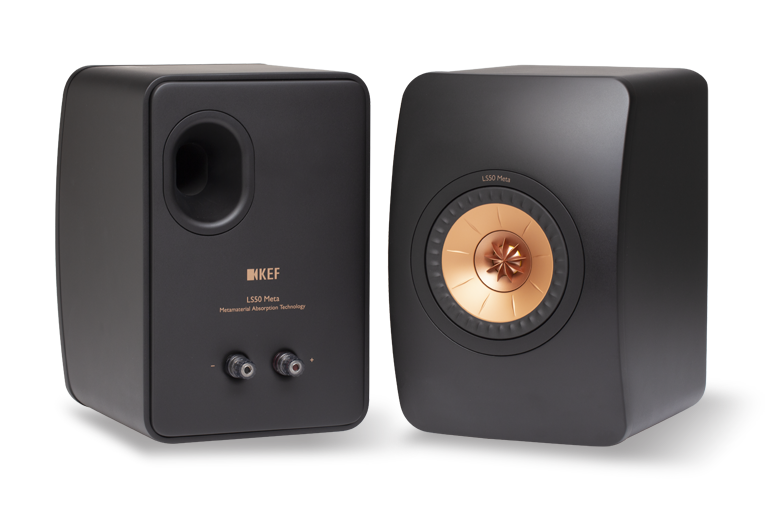 The 1″ dome tweeter and the 5.25″ midrange-woofer, which are assembled in a coaxial configuration that KEF calls Uni-Q, also look similar to the original model’s components. However, there have been changes made to portions that you can’t see, mostly to address distortion. One improvement is what KEF calls a tweeter gap damper, that Doug said “solves a problem KEF had in previous versions of the Uni-Q: the tweeter’s placement in the belly of the midrange-woofer caused changes in air pressure and thus turbulence between the two drivers that interfered with the motion of the tweeter’s dome.”

But the biggest change involves the tweeter, which, as Doug explained, uses “what the new model is named for: metamaterial, which Wikipedia defines as ‘any material engineered to have a property that is not found in naturally occurring materials. [Metamaterials] are made from assemblies of multiple elements fashioned from composite materials such as metals and plastics.’” When Doug visited KEF in March, he was with the SoundStage! video team, who produced a YouTube video about KEF’s Metamaterial Absorption Technology (MAT). The video describes MAT in great detail, so Doug just summarizes the technology in his review:

The MAT is a small disc, about 3″ in diameter and not quite 0.5″ thick, attached to the back of the Uni-Q’s motor structure. Inside the motor is an opening that allows the rearward energy, or backwave, produced by the tweeter diaphragm to reach the MAT disc, which has 30 tubes optimized in size and shape to completely absorb the air traveling into it. Although the tweeter is crossed over at 2.1kHz, according to Oclee-Brown, the MAT disc “can absorb almost 100% of sound from 600Hz up to above 40kHz.” 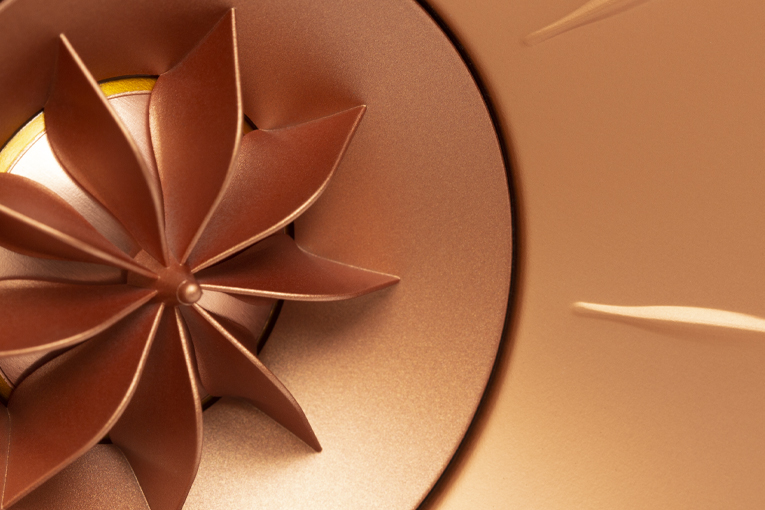 Initially, Doug used the LS50 Metas for casual listening on his living-room system, primarily because of his Hegel Music Systems H95 integrated amplifier-DAC, which is rated to output 60Wpc into 8 ohms and retails for $2000. His rationale was that the H95 is “the sort of amp many will use to drive such speakers.” From that experience he learned that “the little LS50 Metas did a really good job of projecting sound” into the room, which measures 19′L × 15′W × 8′H, and that “the H95 didn’t have to struggle to drive them to loud listening levels.” He also thought that “they sounded clearer and more detailed in the midrange” than he remembered the LS50s sounding.

Doug did his serious listening for the review in his main listening room, which measures about 36′L × 16′W × 8′H, but with only one-half of the room used for the system. In this setup he used Purifi Audio’s Eigentakt amplifier, which can output more than 200Wpc into 8 ohms, to drive the LS50 Metas.

Listening to “Romeo Had Juliette,” from the 2020 remastered version of Lou Reed’s New York (24-bit/96kHz FLAC, Sire/Qobuz), the first thing Doug noticed was “the speakers’ stellar soundstaging and imaging.” However, while he found the bass extension “plenty deep for such small speakers,” it was not as deep or defined as he was used to “from much larger speakers with bigger drivers.” The LS50 Metas lacked “the last bit of effortlessness that bigger speakers can convey,” and Doug noted that “these limitations were a reminder that even overachieving minimonitors can be counted on to provide only so much bass extension, output, and scale.” 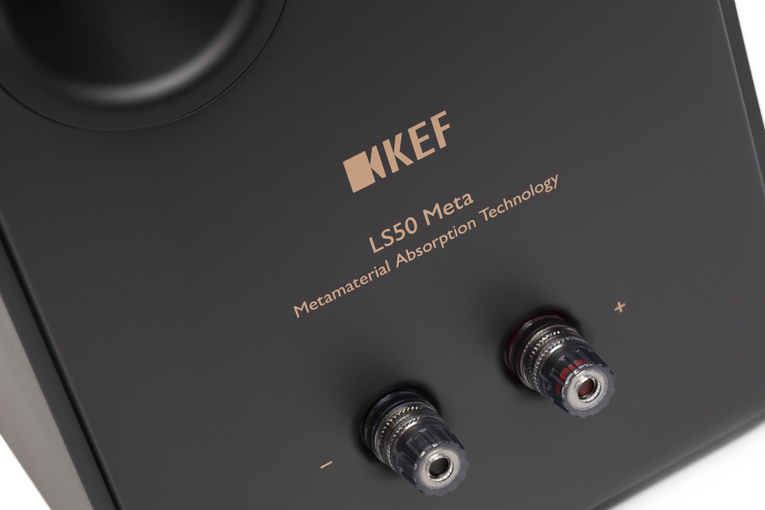 When Doug listened to Lana Del Rey’s Norman Fucking Rockwell! (16/44.1 FLAC, Interscope/Polydor), he highlighted the impressive width and depth of the soundstages, into which the speakers completely “disappeared,” as well as the precisely placed aural images within the soundstages. But it was what the speakers revealed that Doug appreciated most:

What really stuck out with Del Rey’s album was how well I could hear the intricate details of its heavily processed sound. The myriad effects used on her voice not only change from track to track, but within tracks and even within phrases. These changes, many of them subtle, were dead easy to hear through the LS50 Metas, even at very low volume levels.

Doug compared the LS50 Metas with his original LS50s, finding that Norah Jones’s “I’ve Got to See You Again,” from Come Away with Me (24/192 FLAC, Blue Note/Qobuz), allowed him to “suss out the differences pretty well.” He wrote that the Metas placed Jones’s piano “a little farther back on the stage” and allowed her keystrokes to sound “a tiny bit cleaner.” Doug thought Jenny Scheinman’s violin sounded “more prominent through the LS50s,” though that “came with a hint of stridency the Metas didn’t have.” He also found that the LS50s over-emphasized the sibilants in Jones’s voice, and preferred the Meta’s “cleaner” sound. When he compared the LS50 Metas with the original LS50s using the Cowboy Junkies’ The Caution Horses (16/44.1 WAV, RCA), Doug reported that the LS50s “spotlit” the “splashy treble” of this album, which derives from the even more prominent sibilants in Margo Timmins’s voice. Doug concluded the comparison by stating: “None of the differences I heard between these two versions of the LS50 was monumental, but every one of them was in the LS50 Meta’s favor, with no downside.”

Doug also compared the LS50 Metas with two other stand-mounted designs: the similarly sized and priced GoldenEar Technology Bookshelf Reference X (BRX), priced at $1698 per pair; and the larger and much more expensive Focal Diablo Utopia Colour Evo, priced at $16,999 per pair. The comparison to the latter proved surprising, because Doug determined that although the Diablo Utopia could deliver “slightly deeper, punchier bass,” “play louder without strain,” and present a midrange that was a “touch meatier,” he also noticed that the Focal’s “highs are a bit hotter, its soundstaging is no better, and its imaging isn’t as precise.” It certainly wasn’t a clean sweep for either speaker. 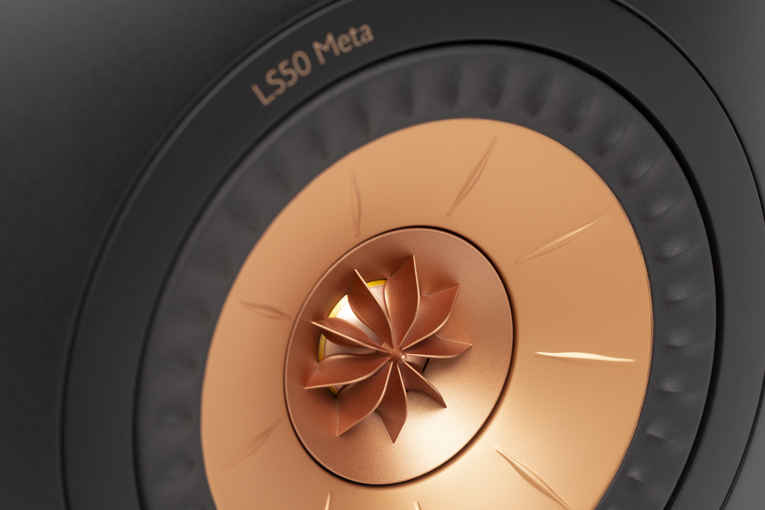 Doug came away impressed with how well the GoldenEar BRXes fared against the KEF LS50 Metas, though he ultimately preferred the latter, stating that they “sounded more immediate, revealed more details, focused sonic images more precisely, and were cleaner through the midrange and highs.”

When Doug summarized his comparison of the LS50 Meta with the Focal Diablo Utopia, he stated that “the little KEFs can’t necessarily always win in the big league, but they can play in it.” When he wrapped up the entire review, he put this in his “Conclusion” section: “You won’t get the deep, detailed bass or high-output effortlessness of much bigger speakers, but for most other aspects of sound, the LS50 Meta can hold its own against stand-mounted speakers of any price.”

The success of the original LS50 had plenty to do with how favorably it compared to much more expensive speakers, and the improved LS50 Meta will probably achieve a similar level of success -- and richly deserves to be added to our listing of Recommended Reference Components.