In March 2022, we presented the Monitor Audio Silver 500 7G loudspeaker with a Recommended Reference Component award. Philip Beaudette had reviewed the speaker on this site the month before, when it received a Reviewers’ Choice award. Dennis Burger reviewed Monitor Audio’s Silver 300 7G, the 500 7G’s little brother, on SoundStage! Access in March 2022, where it too earned a Reviewers’ Choice award. Now, like its sibling, we’re presenting the Silver 300 7G with a Recommended Reference Component award as well, because it performs to an equally high standard. 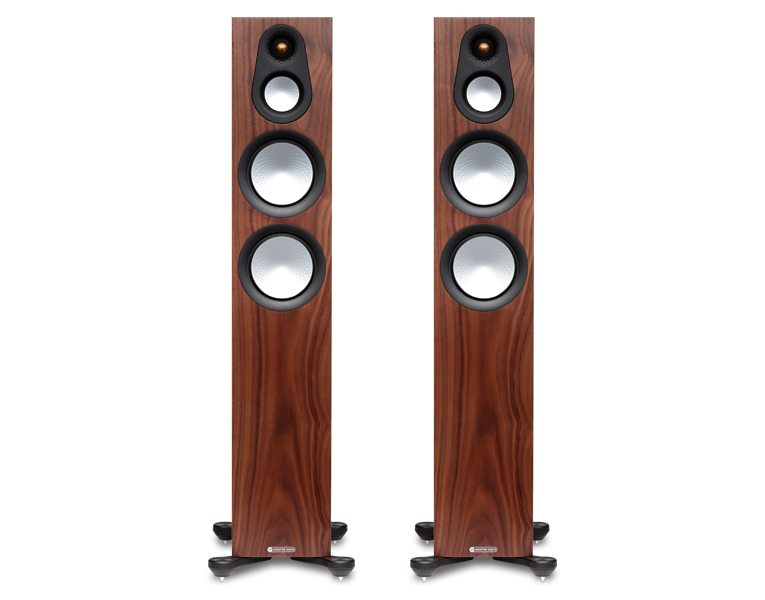 The combination of the 300 7G’s smaller cabinet and woofers results in less bass output than the 500 7G—the company specifies a 31Hz in-room bass response for the 300 7G, compared to the larger floorstander’s 27Hz (both -6dB). The rated sensitivities of the two speakers for a 2.83V input, measured at 1m, are a little different as well: 87.5dB for the 300 7G and 91.5dB for the 500 7G, which our measurements of the 300 7G and 500 7G corroborated reasonably well (our sensitivity measurements were 1dB lower for each speaker, but that can be attributed to measurement technique). This means that the 300 7G needs more amplifier power to play at a given output level than the 500 7G does (every 3dB increase in output from a loudspeaker requires a doubling of amplifier power). However, even a moderately powerful amplifier should be sufficient for the 300 7G—Monitor Audio recommends 80 to 200W into 8 ohms.

But the speakers are otherwise similar, right down to the finish options and build quality, which are identical. Both models use the same 3″ midrange driver and 1″ tweeter, the latter mounted in what the company calls its Uniform Dispersion Waveguide II. All the drivers on both speakers have C-CAM (ceramic-coated aluminum/magnesium) diaphragms, manufactured from a material that Monitor Audio began using decades ago and has been refining ever since. Both speakers have dual ports on the rear panel. 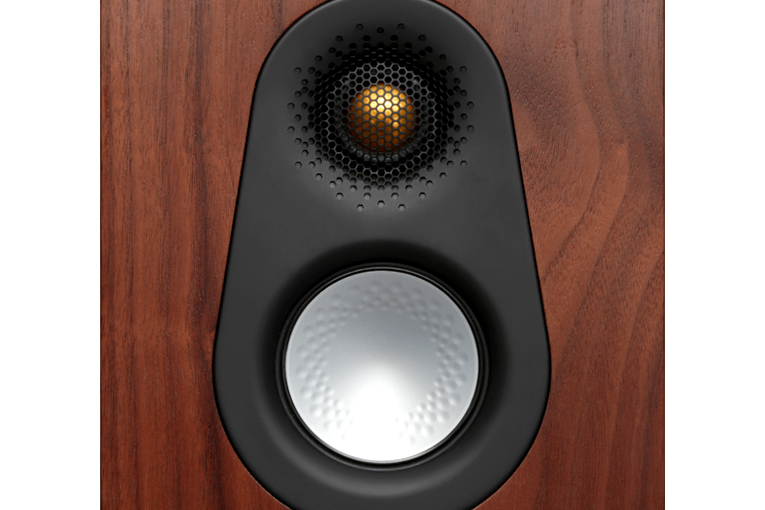 In his review, Dennis wrote that his “hardcore scrutiny of the Silver 300s began with the first iteration of ‘In Memory of Elizabeth Reed’ on the Allman Brothers Band’s The 1971 Fillmore East Recordings (24-bit/192kHz FLAC, Island Def Jam / Qobuz).” He then penned: “From note one, I found myself captivated by every aspect of the Silver 300s’ sound, from the wide and deep soundstage to the spot-on image specificity and the pitch-perfect tonal balance.”

Dennis then went on to explain how the level of detail reproduced on this recording was “exquisite” and that “Berry [Oakley]’s bass also struck the perfect balance between authoritative and laid back, giving weight to the entire endeavor without ever being overbearing.” He also noted how “tonally, spatially, texturally, temporally, and in every other respect that matters, the Silver 300s did such a spot-on job with this recording that it was difficult to say anything truly meaningful about the speakers themselves.” In fact, all he heard was “the music”—when he closed his eyes, “the Silver 300s called practically no attention to themselves.” 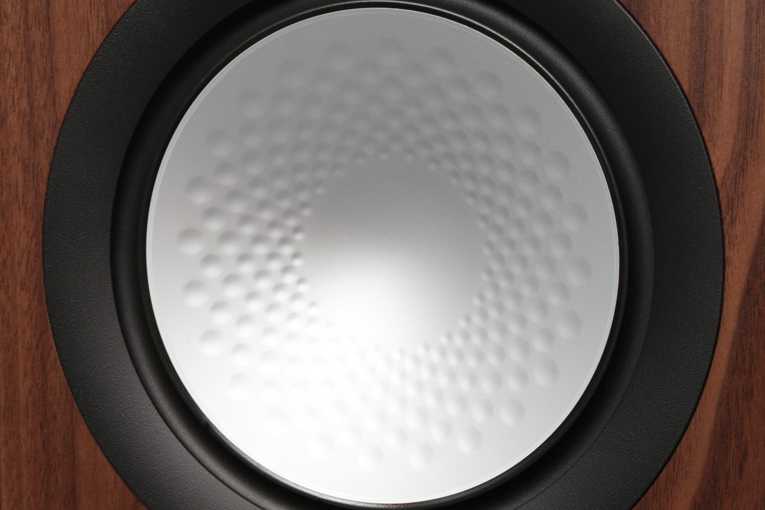 Dennis subsequently turned his attention to “Right Turn” from The Essential Alice in Chains (16/44.1 FLAC, Columbia Legacy / Qobuz), which he described as one of his “favorite test tracks.” He wrote: “The presentation of the Silver 300s was so even-keeled, though, that the quartet gelled into 44 percent of a mythical hydra. I would say they became one, but that’s far from the case. Due to the precise imaging and soundstaging, as well as the bountiful detail of the speakers, each singer was easily identifiable, spatially and texturally, but their performances were delivered on such equal footing that there was something magical about it.”

“Smoothie Song” from Nickel Creek’s This Side (24/96 FLAC, Craft Recordings / Qobuz) simply confirmed what Dennis heard in the other tracks—“I have no additional observations to make about the Silver 300s’ fantastic imaging, soundstage, tonality, and detail,” he scribed—but it also demonstrated to him “how wonderfully wide and even the dispersion of the Silver 300s was.” Walking about his room, Dennis did notice that the speakers lost “some precision in the very upper registers,” but even this off-axis behavior “rolled off gracefully.” 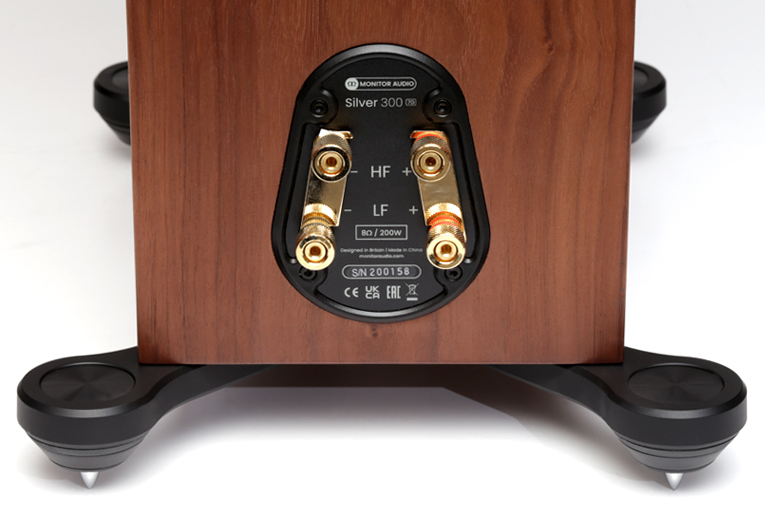 Dennis summed up his listening impressions by declaring that “the Silver 300 sounds like a three-way tower speaker should sound”—in other words, he could muster few complaints. He said that he was “curious to hear how much of an improvement” he would get in his smallish (10′ × 12′) listening room by moving up to the 500 7G. But Dennis added that he was “only a little” curious.

In a video praising the 500 and 300 7G loudspeakers on our YouTube channel, Doug Schneider made the point that the bigger and/or more expensive speaker in a lineup isn’t necessarily a better speaker for every listener, even if it can deliver more bass and higher output levels. He explained that it’s more important to appropriately match the speaker to the room. For example, the 300 7G might be a better option than the 500 7G for a listener with a smaller room, like Dennis’s, which could be overloaded by too much bass. But whether it’s the Monitor Audio Silver 300 7G or 500 7G that’s the best fit, a purchaser can be confident that he or she will be getting a great set of loudspeakers—ones that we’ve now recognized with Reviewers’ Choice and Recommended Reference Component awards.