The resurgence that vinyl has experienced is certainly a boon for those who make and sell records, but there’s not much that’s new under the sun for this medium—the records, turntables, tonearms, and cartridges aren’t very different from how they were in vinyl’s heyday in the 1970s. But there has been one recent development that has advanced vinyl as a playback medium—the optical cartridges and accompanying phono preamplifiers that Japan’s DS Audio began making almost ten years ago. In July, Jason Thorpe reviewed the company’s DS Audio DS 003 cartridge and companion DS 003 phono preamplifier, a combination that he declared offers “paradigm-smashing performance” for the $6000 (all prices in USD) package price.

In his review, Jason explained that, like all the company’s cartridges, the DS 003 “doesn’t rely on magnets and coils to generate an electrical signal”; instead, “there are LEDs inside the DS 003 cartridge. They shine toward the rear of the cartridge, and at the back are sensors—‘photo detectors’ in DS Audio’s parlance. Between the LEDs and the photo detectors is a thin, lightweight plate attached to the cantilever that casts a shadow over the sensors. As the stylus tracks the record, the plate moves and varies the shadow it casts on the sensors, allowing more or less light to hit them. This variation in light generates an analog (not a digital) signal.” 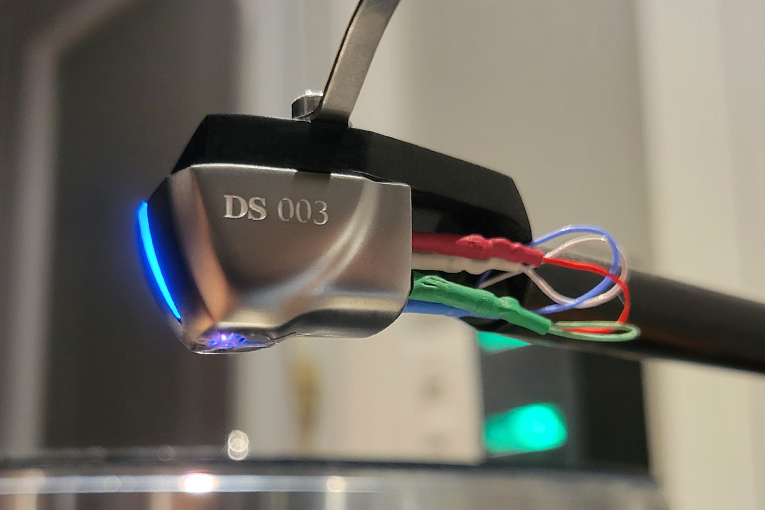 Jason also explained that the “LEDs in the cartridge need power, and the signal the cartridge generates is substantially different from that generated by a conventional magnet-and-coil setup. This points to the need for a dedicated phono stage, one that can a) supply power to the cartridge and b) handle the amplitude-proportional signal output by the optical cartridge (magnetic cartridges generate a velocity-proportional output). Thus the need for the matching DS 003 phono preamplifier.”

DS Audio supplies compatible phono preamplifiers for its range of novel cartridges, for the reasons Jason mentioned. But now that the technology has caught on, other companies, such as Canada’s EMM Labs and Meitner Audio and Japan’s Soulnote and Uesugi, are now offering DS Audio–compatible phono preamplifiers. More companies are likely to follow suit. 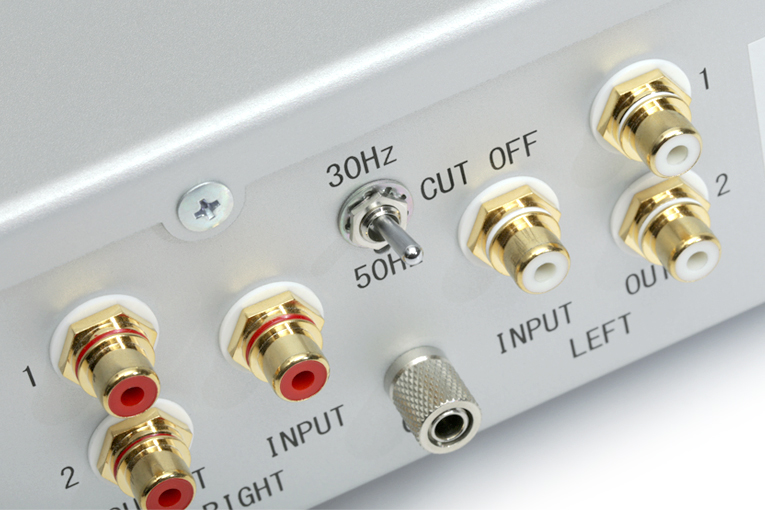 The efficacy of DS Audio’s cartridge and preamplifier system was proven to Jason when he installed the DS 003 cartridge on his VPI Prime Signature turntable with JMW 10 tonearm and played Duke Ellington’s Indigos (Columbia CS 8053 / Impex IMP6010):

I sat there listening to Indigos with my mouth hanging open. The sense of the hall, the large studio in which the album was recorded, was all around me, and every instrument took on a physical size that really took me by surprise. The horns gained a sense of dynamic slam that I didn’t think was possible in my system. This sense of size and power didn’t come at the expense of the lush, jam-filled richness that drips from this record. All the hallmarks of this LP that I know and love were still there, but now they were accompanied by insane attack from the leading edge of every instrument, huge dynamic swings, and a sense of clarity and vivid imaging that made me stop what I was doing and sit there, transfixed.

Jason then played the Thelonious Monk Quartet’s Monk’s Dream (Columbia / Music on Vinyl MOVLP842) and felt he “was crawling around inside the recording.” He continued: “The attack on every instrument—the almost contiguous feeling of Monk’s fingers hitting the keys, the action of the piano that moved the hammers that struck the strings, and then the sound reflecting out of the piano and striking the wood of the lid—it was all there, presented in a way that was utterly different from how I’m used to hearing music in this system.” 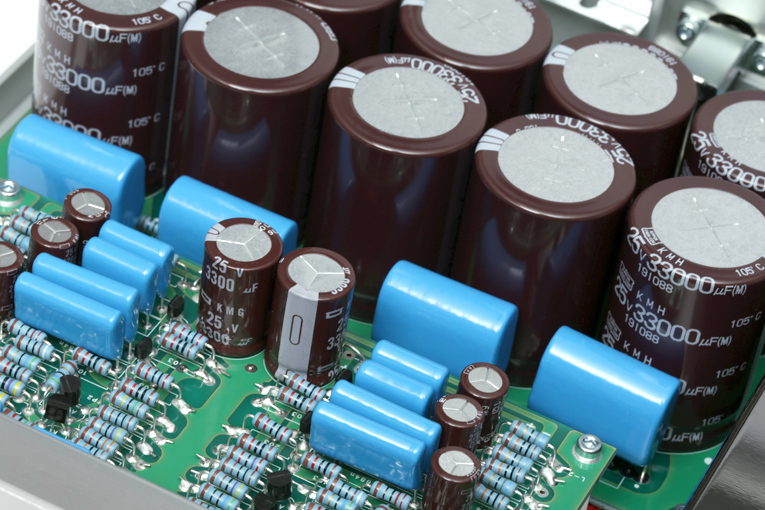 The reproduction of John Zorn’s The Last Judgment (Tzadik TZ 6009) also impressed Jason. It’s an album he described as “a difficult listen” because “one moment it’s smooth, spacey, minor-chord jazz, next thing you know it’s exploding in all directions, with Mike Patton losing his shit and every instrument raging at full tilt.” Jason declared that he knew the album very well, but “listening to it at high volume through the DS 003 was an event, an almost transcendent experience.” He described how there was an “ease in the treble combined with infinite extension,” which generated “crisp, solid, juicy images of instruments and voices, placed distinctly in space, with depth and realism”; something he hadn’t experienced from this recording before.

Jason also described what he heard from other recordings, heaping even more praise on the DS Audio DS 003 combination in the process. He cited attributes such as the “speed and the clarity” and the “portrayal of images and scale.” But it was the recorded detail the DS Audio products could retrieve from the record grooves that really impressed him: “As the review period progressed, I became more and more enamored, more and more astonished with how much resolution the DS Audio system dredged from records that I thought I knew so well.” 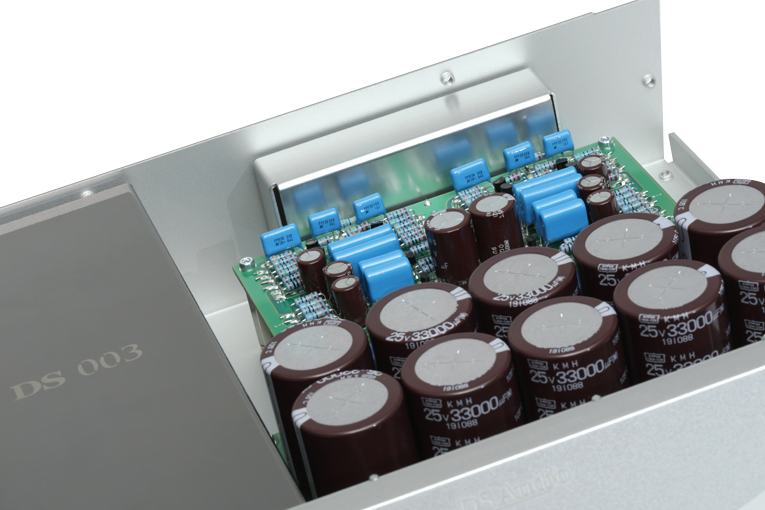 But Jason also cautioned that “the DS 003 might be just a bit too much for some people,” explaining that “vinyl, for the most part, sounds lusher and more romantic than digital,” and tends to “take the edge off reproduced sound and render it as just a touch more human.” As a result, he didn’t know if everyone would appreciate “the crisp, detailed, almost hyperrealistic presentation of the DS 003.”

Jason, a vinyl diehard, was obviously okay with the type of sound that the DS 003 duo delivered, because he proclaimed that the cartridge/preamplifier combo bettered the “$12,500 Top Wing Blue Dragon cartridge combined with the $25,000 Constellation Revelation Andromeda phono stage” setup that he had previously thought of as his “benchmark, please-bury-me-with-it, high-water mark for analog front ends.” That’s why near the end of his review, Jason declared that the DS 003 cartridge and companion preamplifier represent an “an astonishing value” and that “you’d be crazy if you didn’t consider” this setup if you have “six grand to spend.” 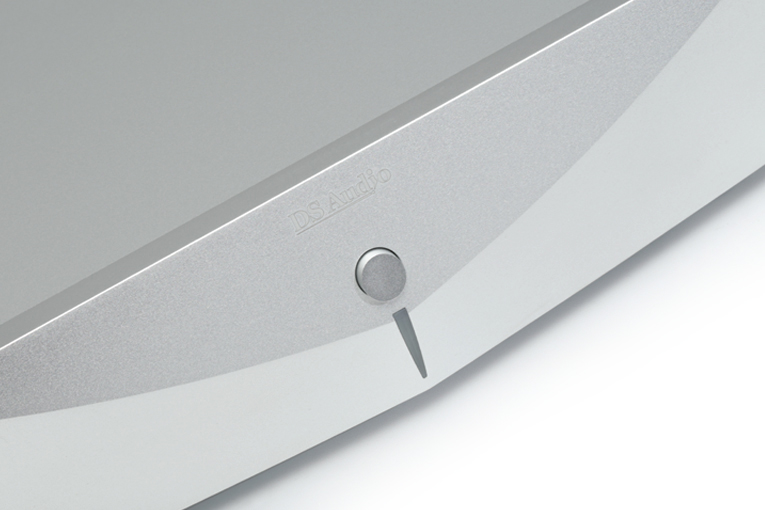 With all Jason’s praise, the DS 003 cartridge and companion preamplifier earned a Reviewers’ Choice award when his review was published—and the pairing is now being presented with a Recommended Reference Component award this month.