In his December 2022 review of the SME Model 60 turntable and Series VA tonearm on SoundStage! Ultra, Jonathan Gorse declared that SME is “one of the crown jewels of the British audio industry, and is as quintessentially English as the BBC, Windsor Castle, or strawberries and cream at Wimbledon.” In his review, Jonathan described the firm’s new Model 60 turntable as “the culmination of over 60 years of audio development.” Jonathan commented: “SME released its last flagship turntable, the Model 30, in 1990—over 30 years ago—so it’s not a company that releases new products just to appease the whims of the marketing dept.”

At the time that Jonathan’s review was published, US pricing for the Model 60 and its companion tonearm hadn’t been established, so we published the UK price for the combination—£49,950 in a standard finish, and up to £59,950 for a premium finish. This was fitting, because Jonathan is based in the UK, like SME, and the company supplied the review sample to him directly. That SME sample came equipped with an Ortofon MC Cadenza Black cartridge, which retails in the US for $2879. We’ve since learned that the US price for the Model 60 and Series VA combo starts at $71,000. 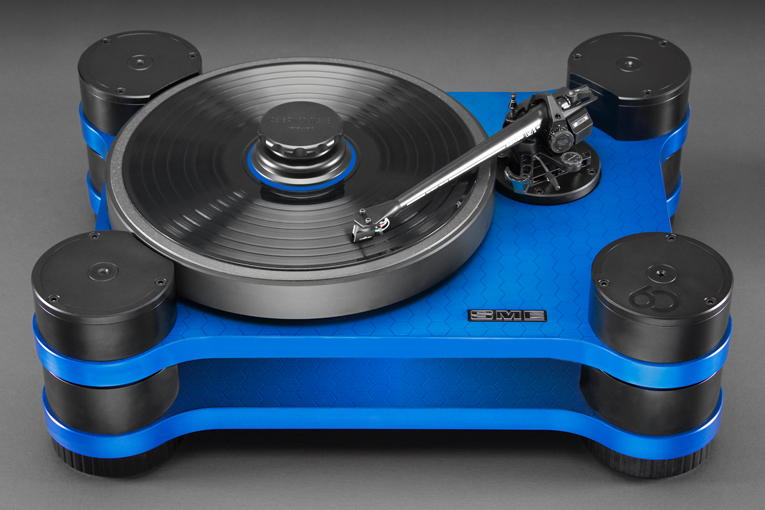 Jonathan describes the deck in his review: “The Model 60 weighs a considerable 106 pounds. It has a larger footprint than the Model 30, too, at 21.9″W × 16.4″D × 8.3″H. The associated speed-control unit and power supply weigh an additional 13 pounds and have the same utterly immaculate quality of finish as the turntable itself. In short, this is precision heavy engineering and the sort of turntable Isambard Kingdom Brunel might have built.” The turntable is “a two-tier suspended design, with each tier hewn from solid, aerospace-grade aluminum. The bottom tier, effectively the base, is supported at each corner on four huge, circular feet, which are height adjustable for easy leveling and decoupled from the base chassis by an internal isolation system.”

Jonathan explained that VA stands for “five advanced,” and the arm has “the same bearing housing as the Series V, but the arm tube itself is hewn from an advanced polymer-resin material, which is stiffer and offers better damping than the pressure-cast magnesium arm tube used on other SME tonearms.” 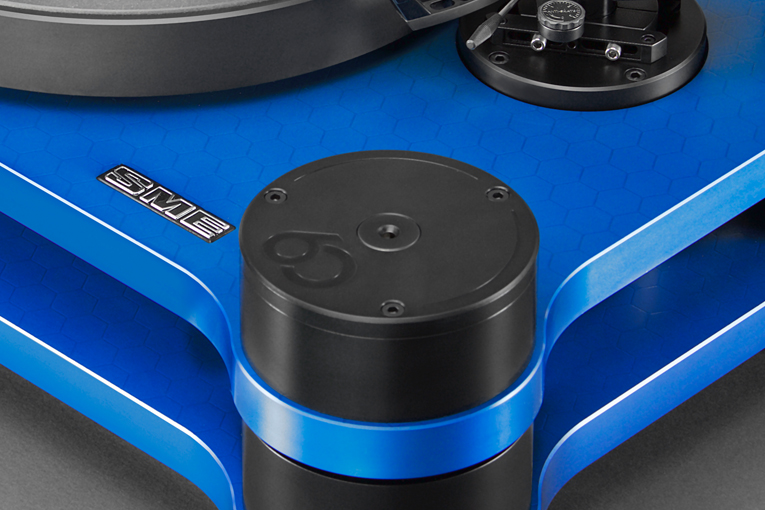 To review this turntable, tonearm, and cartridge, and to compare the combination to his own setup—a Michell Engineering GyroDec turntable with an SME Series IV tonearm and an Audio-Technica AT-OC9ML/II cartridge—Jonathan assembled what he called a Best of British hi-fi system in his 33′ × 14′ listening and living room. He describes the components that comprised the system in detail in his review. Jonathan’s listening impressions began as follows:

I opened with an original 1969 pressing of the John Barry soundtrack for On Her Majesty’s Secret Service (United Artists Records UAS29020) and the sublime “We Have All the Time in the World.” Louis Armstrong’s fabulous baritone voice issued forth like he was in the room—rich, sonorous, expressive, dynamic, and just so very real. On lesser systems, Armstrong can sound slightly indistinct, but not here—every inflection or nuance had the clarity of morning dew. I swear I could tell he had a smile on his face as he sang this song. The track’s subtle acoustic-guitar motifs were astonishingly clear and transparent, but it was those absolutely masterful Barry strings that jumped out as never before.

Jonathan also noted that he was “enjoying the sound so much” that he “ended up playing the whole album, and reveled in the ease with which this special system conveyed the beauty of Barry’s score.” He added: “In terms of imaging, the Model 60 offered a soundstage that was so stable it felt like architecture hewn from granite. Nothing moved or drifted in depth or width, instruments and performers stayed absolutely secure, and were thus more believable.” Jonathan further remarked that the soundstage “extended far outside the confines of the speakers” and that he was “sometimes surprised at just how wide this felt compared to other sources.” 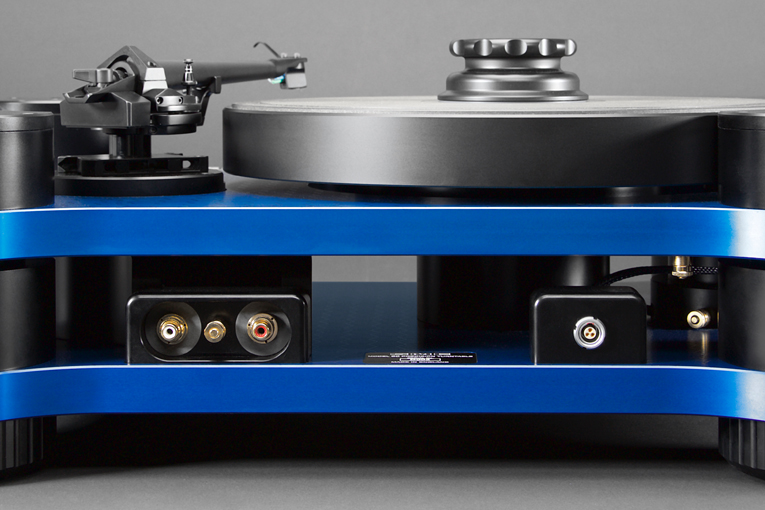 For something completely different, Jonathan played an “original vinyl copy of Michael Jackson’s Bad (Epic EPC450290 1),” a record he feels is “all about percussive impact, speed, and agility.” In his review, Jonathan stressed that “one of the revelatory things about the Model 60 was the way that it suppressed all extraneous noise—there was no rumble, little hiss, no environmental disturbance, and no noticeable resonance. As a result, the opening track positively exploded from the loudspeakers.” He also penned: “With the SME at the head rather than my usual GyroDec, the system was punching deeper and harder than ever.”

Jonathan continued to describe his listening experiences with his copies of Holst: The Planets (HMV ASD 3002) and Kate Bush’s The Kick Inside (EMI EMC 3223). With the former, he explained how “the system presented the orchestra with a superb sense of depth and width,” as well as “with tremendous scale and gravitas.” With the latter, Jonathan pointed out that the system reproduced the “fine details of the recording” with more clarity that he’s heard “from any other source.” 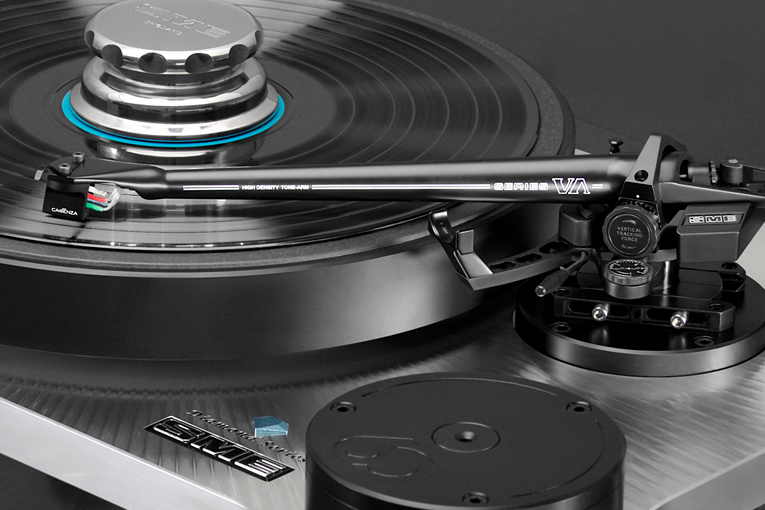 Summing up his overall impressions of the Model 60 with Series VA tonearm, Jonathan wrote: “This deck sets a new standard—not just for SME, but for vinyl replay in general.” He also proclaimed that it’s “a landmark product from a legendary firm,” and added that he believes the Model 60 is “the best-looking turntable SME has ever made.” Jonathan made his feelings known about the Model 60 in no uncertain terms: “In terms of design, execution, and finish, it is the supreme example of its maker’s art.”

Jonathan’s rave review of the SME Model 60 turntable and VA Series tonearm earned the combination a Reviewers’ Choice award when the review was published, as well as a prestigious 2022 Product of the Year award a couple of weeks later. This month, a Recommended Reference Component award has been added to that list of accolades.