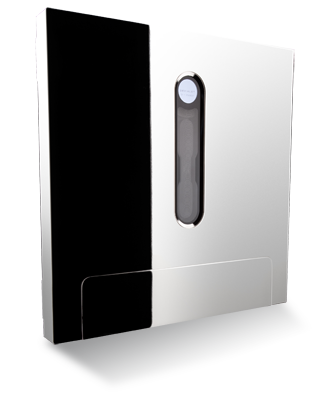 On May 15, we published a review of the Devialet D-Premier integrated amplifier-DAC as if it were a product like any other -- except that it won our Reviewers’ Choice award, which not every component does. Still, no fanfare, no hoopla, no "Look Here!" signs accompanied the publication of the review, even though the Devialet warranted more attention than most new audio gear. To know how special the D-Premier is, you’d have to read Doug Schneider’s review to the end, where he concludes that it’s "one of the very best products on the hi-fi scene today." Hopefully, this article will highlight just how relevant that review was, and how important this new product is.

Devialet is based in France, and the D-Premier, after years of research, is their first product. Among many other things, they got the styling right. The D-Premier comes in a beautiful chromed chassis carved from a solid block of aluminum. It can sit on a shelf or be mounted flat against a wall. The supplied RF remote control is built the same way. The D-Premier may be relatively small, but it looks exceptional.

Part of what makes the D-Premier so special is that it’s an all-in-one device: a digital-to-analog converter, an analog-to-digital converter, a phono stage, a preamplifier, and a power amp. How this all works together is what makes it interesting. The D-Premier is a "digital" integrated amp -- all analog input signals are converted to digital, even the phono input. Of course, the signals coming in through the digital inputs remain digital. Volume adjustment and phono equalization are done in the digital domain, and the D/A conversion is done at the final amplification stage. Bascom King, of BHK Labs, measured the D-Premier for us. He calls the D-Premier a "volume-controlled power DAC," as that’s more or less how it operates. And the D-Premier’s measured performance is exceptionally good.

While the D-Premier’s overall configuration is interesting enough, its amplification section is unique. Devialet’s Analog Digital Hybrid (ADH) technology, which the D-Premier employs, took the company years to get right. It combines a pure-class-A amplifier for voltage with a class-D switching amplifier for current. The kicker for audiophiles is Devialet’s claim that the sound is that of a pure-class-A power amp, while the class-D section is basically there to give the amplifier the current necessary to drive a speaker. For many audiophiles, the sound of class-A amplification is the Holy Grail. The D-Premier is claimed to deliver 190Wpc into 8 ohms or 240Wpc into 6 ohms, and to be stable into loads as low as 2 ohms. 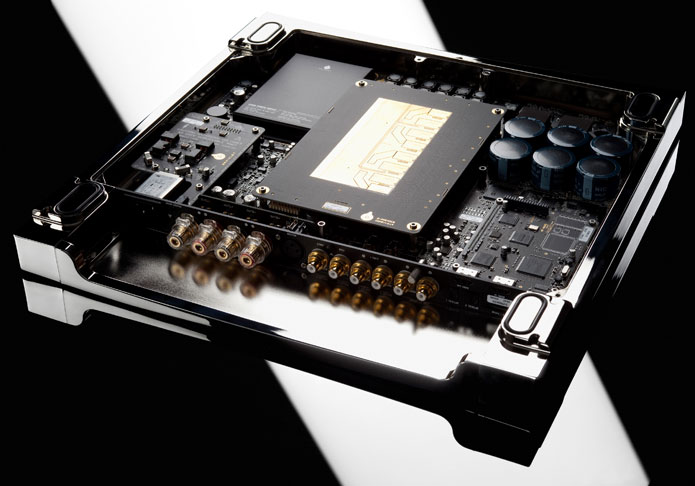 Though it has the bare minimum of controls, the D-Premier is surprisingly rich in features. It has a number of coaxial and optical digital inputs, as well as an HDMI input and output (the latter is not yet operational). There are also two analog inputs for line-level devices, which can be configured as phono inputs. In fact, the entire model is custom configurable, though that’s too much to get into here; suffice it to say that the D-Premier is extremely versatile. But there’s no USB input -- instead, by the time you read this, Devialet should have released an upgrade for internal Wi-Fi, their preferred way for the D-Premier to talk to a computer.

Of course, advanced technology, beautiful styling, and an extensive feature set don’t mean a hill of beans if the sound isn’t right, and in this department the D-Premier more than holds its own. In fact, it’s vying to be at the top of the heap. Doug Schneider found the D-Premier to be the cleanest-, clearest-, smoothest-sounding amplifier he’s ever reviewed, and felt that it sets a new standard for detail and resolution. A plethora of details -- things he’d never heard before -- emerged from every one of his reference recordings. He’d never heard any integrated amplifier or combination of separates that sounded this good. He also found the D-Premier’s power output more than sufficient for his Revel Ultima Salon2 speakers, and its control in the bass astonishingly good.

Though Bascom King regularly measures amplifiers for the SoundStage! Network, he rarely comments on their sound. In this case, however, he took some time to listen to the D-Premier after measuring it, and added this to his technical comments: "I listened to this amplifier in my system quite a bit, and found it to be most revealing, clear, and musical. I wish I owned it!"

The D-Premier is a unique device that’s well worth its asking price of $15,995 USD -- not only because it crams an ADC, a DAC, a phono stage, a preamp, and a power amp into a single gorgeously styled and finished chassis, but also because it sounds exceptionally good. Time will tell if the Devialet proves as revolutionary as it now seems, but one thing is sure: The D-Premier is not only one of the best hi-fi products available today, it’s an integrated amplifier-DAC with state-of-the-art sound. And that qualifies it as a true Recommended Reference Component.