When you gaze across the hi-fi landscape, Audio Research Corporation of Minnesota is clearly visible as a long-established landmark. Now going strong in its fifth decade, ARC remains devoted to the advancement of the state of the art of music reproduction, primarily via its focus on the accuracy and integrity provided by tubed designs. Of the myriad tubed components offered by ARC over the past 40-plus years, they’ve labeled a select few "Reference." In the case of the line-stage preamplifier currently wearing that badge, the Reference 5 ($12,000 USD), we believe that the designation "Reference" is justified. 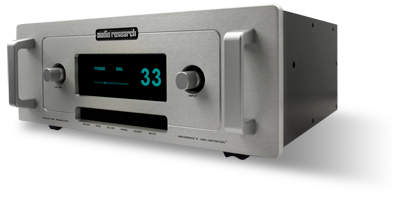 Ready to serve the demands of even complex systems, the commanding, 30-pound Reference 5 stands 19"W x 7"H x 15.5"D. It presents a contemporary, monochrome interpretation of the classic ARC look, and is available with either a black or a silvery aluminum faceplate and matching handles. The front panel is dominated by a large display; its green characters are easily read from across a room, and its intensity of illumination can be dimmed or shut off altogether. Flanking the display are knobs for selecting volume and input, and under it is a row of six buttons: on/off, theater-bypass mode, balanced or single-ended connections for each input, mono summing of channels, invert absolute phase, and mute. The remote control duplicates all of these controls and adds four more: direct input access, balance, display brightness/off, and an hour counter for monitoring tube life. On the rear panel are six primary inputs (CD, Tuner, Phono, Video, Aux 1, Aux 2), and a seventh, a unity-gain Processor input for theater bypass. There are also two pairs of main outputs and one record out. All inputs and outputs are available both single-ended (RCA) and balanced (XLR), and are arranged in ten columns of matched pairs.

Like all ARC components, the Reference 5 is handmade at the company’s headquarters outside Minneapolis, and almost entirely of US-made parts. Its circuits are fully balanced, pure class-A triode with zero global feedback. From the input board, the signal is routed to the 103-step volume control, then directly to the tubes. Gain is provided by four of the Ref 5’s five 6H30 dual-triode tubes, one each for the positive and negative halves of each stereo channel. The fifth 6H30 and a single 6550C pentode tube regulate the power supplies. There are 12dB of gain available at the balanced outputs, 6dB at the single-ended outputs. The Ref 5’s frequency response is a claimed 0.2Hz-200kHz, +0/-3dB, and with over 350 joules on tap, the capability of the multistage power supply is appropriately deemed "massive."

But an honorable pedigree and good measurements is one thing. Sounding great in system after system is quite another. We’ve heard the Reference 5 again and again, and it has consistently impressed us -- there are no tricks or sleight-of-hand at play. In the Ref 5, ARC has built on the strengths inherent in the performance of tube sound while eliminating or minimizing the technology’s limitations, both real and perceived. The flow and gestalt of musical performance are rendered with aplomb, as would be expected from tubes. Emotional engagement is there in spades, as is the simultaneous transmittal of macrodynamic and microdynamic information. With a sound both detailed and relaxing, even after hours of listening, this preamplifier beckons for more. 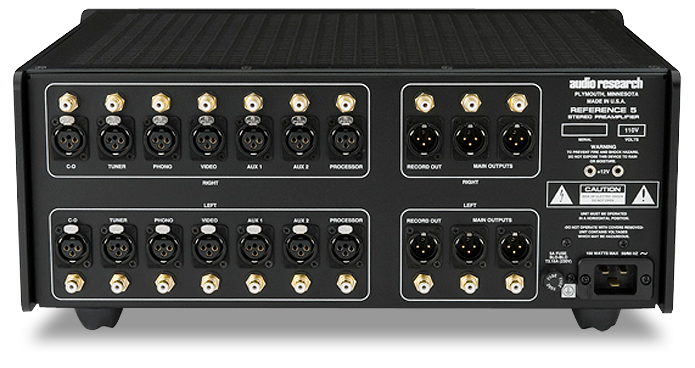 Yet the Reference 5 also provides things not expected from tubes: a noise floor so low you need to almost hug the speaker to hear it, and transient attack and a top-to-bottom consistency that were, until recently, the sole domains of transistors. This precision electronic instrument is not for those who seek the bloom and euphonic colorations often attributed to tubes. In fact, but for the necessity to turn the Ref 5 on and off to preserve the tubes (ARC estimates that a set of tubes should last 4000 hours), the listener could be fooled into thinking she was listening to a solid-state preamp of lifelike perfection.

While its overall balance of sonic attributes sets the bar high, the Reference 5 truly distinguishes itself in its uncanny ability to re-create a vibrant and palpable soundstage. That stage is fleshed out in all three dimensions, with fully rounded senses of width, depth, and height. Instruments and voices are reproduced as convincing illusions of physical objects and bodies in actual space, with a weight and a substance consistent with those found in real life. At times, the effect is almost eerie.

No audio component is perfect, and the ARC Reference 5 is no exception. Yet its sins are those of omission and, given their lack of severity, essentially benign. Exceedingly neutral regardless of volume setting, the Ref 5 nevertheless has a sweet spot -- it starts to really sing when its volume control is almost two-thirds of the way up its 103-step scale. Also audible is a very fine grain -- less than what’s typically heard with tubes, but a coloration that the very finest solid-state preamps seem to eradicate entirely. Of course, the tubes will eventually have to be replaced every fourth or fifth year of regular service (or twice a year, if you demand an "always on" state of readiness). Finally, the Ref 5’s traditional (if updated) ARC look may not be to everyone’s taste -- that big display panel has generated the strongest opinions. Ultimately, however, it’s what the Reference 5 does, and does so well, that speaks for itself.

SoundStage! Network reviewer Pete Roth was smitten with the ARC Reference 5 line-stage preamplifier. He was beguiled by its ability to generate the most compellingly realistic, three-dimensional soundstage of any preamp that has graced his system. He concluded his April 2011 review with this: "Never less than musically engaging . . . the Reference 5 is a superlative musical investment, an indisputable high-end bargain, and a fortification for another 40 years of audio excellence from Audio Research." A Recommended Reference indeed!