A Return to Passives with Bespoke Audio

Audiophilic obsessions, trends, or movements have proven to be cyclic over the years. I can’t quite nail down the lengths of the cycles, but it seems that we periodically revive hi-fi practice modes, the renewed interest coming from Japanese enthusiasts, French tube worshippers, Italian anachrophiles, or other hobbyists.

These revived topics then enjoy brief moments of interest, often attracting the complicity of manufacturers, while the press spreads the information to the audiophile community before the pursuit fades back to “forgotten cult” level. Think absolute phase, biwiring, spike mania, record clamps, and other behavioural anomalies which have perpetual adherents, but which drop off the radar for the less-committed.

I have been musing of late about something overdue a temporary renaissance: the passive preamp. This isn’t about being controversial: I have a practical need. High-end passive preamps suddenly appealed to me because I am now deeply immersed in open-reel tape and run six machines. The idea of a completely silent -- i.e., passive -- switching box has special charm, should I need to produce “safety” copies of fragile 60-year-old-plus tapes.

Recently I borrowed a cutting-edge example of the genre, which reminded me of past experiences going back over 35 years. This also drove me to return to a passive preamp of mine which has been sitting on a shelf for ages, from Air Tight. Despite using a superlative active preamp as a reference, I’ve filled all its inputs (who knew four balanced and four single-ended ain’t enough?); adding a passive unit with four or more extra inputs could save me much hassle.

This in turn took me down Memory Lane, which may incite pedantic corrections from those of you with more dependable memories. To the best of my knowledge, the first passive to have impact on a commercial level and to enjoy appeal beyond a cult was the magnificent Mod Squad Line Drive, produced during the period of 1984 to 1992. It offered five inputs, handled two tape decks, and had a mute setting. Perfect. 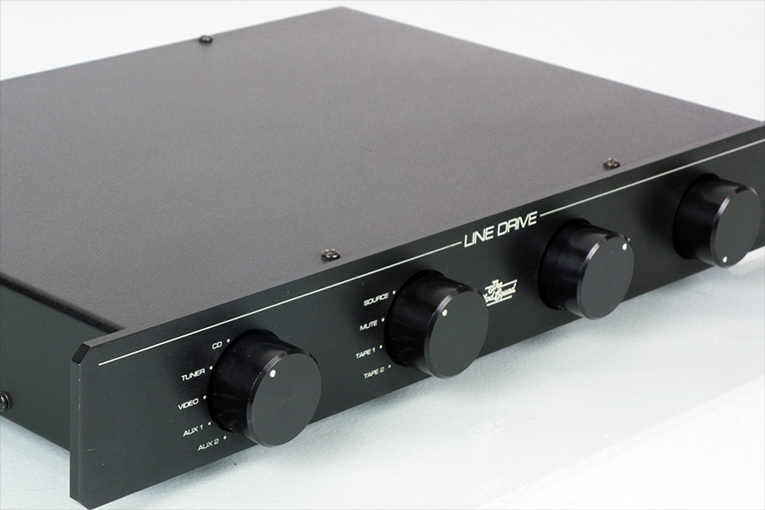 Beautifully constructed, purely functional, standing 16.5"W x 2.31"H x 11.5"D and exemplifying the perpetual (as opposed to trendy and ephemeral) audiophile obsession with quality parts, the unit evolved to incorporate different materials and components. These included the types of wire and solder, grounding arrangements, the make of volume controls, socketry, and switches.

Line Drives were truly passive, without power supplies or buffer stages, and thus exhibited what is pretty much the only downside of passives -- no gain, which means your sources need ample output, and you are limited by cable length. But they are supreme for neutrality. The two models, Standard and Deluxe, were operationally identical but differed in the parts used, e.g., Tiffany sockets for both, but WBTs for some of the inputs on the Deluxe. You can still find Line Drives on used audio gear sites and eBay; I recently saw one for a bargain $545.

By 1994, there were a number of passives on the market, and that year Air Tight -- one of the best manufacturers of tube amps on the planet -- introduced the ATL-10A. As is typical of this Japanese brand’s skills, the construction and feel are second-to-none, and they added a twist. While I will not say they were the first to do so, the ATL-10A offered remote control and an illuminated front panel, thus necessitating an AC connection, though electricity didn’t touch the signal path. 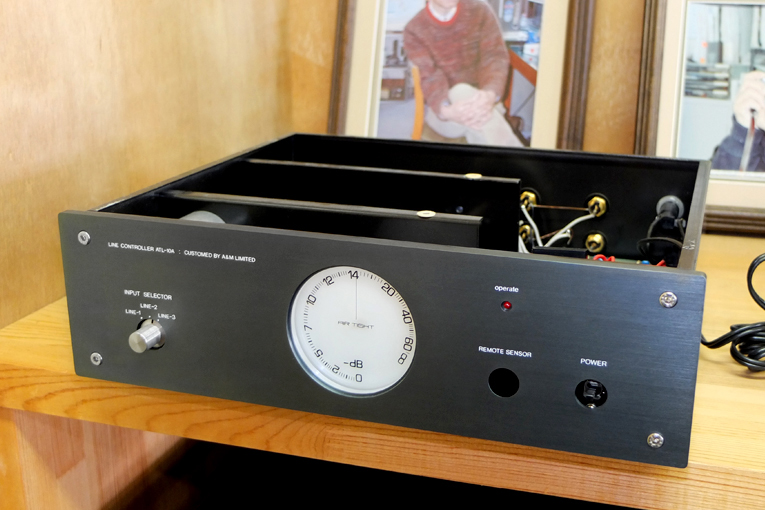 Its look was defined by a round meter which showed the relative level setting, and it lit up when switched on, along with a red LED. It provided three line inputs and a record output, employed 6N wiring, and was fitted with an attenuator as used in the company’s active units. Extra attention was paid to shielding, and there was the option of the Alps RK501 volume control. Compact at 15.35"W x 3.75"H x 9.85"D and utterly jewel-like, the ATL-10A is a forgotten masterpiece. Again, these turn up online and are absolute steals at $500 to $1000.

Why this history lesson? Because they are evolutionary steps on the way to the passive I borrowed from Bespoke Audio. For once, a company lives up to its name, for the company’s preamplifier is truly made-to-order, both equipped and attired to the client’s specific requirements, preferences, and/or demands. I spent two weeks with the entry-level form, revelling in its silence, its competent handling of sources, and a special trait which eliminates the entire cable length issue.

It was the “B-word” that led me to follow through on an invitation to sample the Bespoke, because it is a term bandied about in the luxury sector -- clothes, watches, cars, etc. -- as a badge of greatness. Rarely does it affect hi-fi, save for things like speaker finishes. Explained Bespoke’s Harry O’Sullivan, “Each preamplifier is built by hand, to order, and to the customer's specification. Our goal is to build the preamplifier the customer wants, not to persuade them to choose the one we make. There is a document on our website which explains some of the technical and background information on our company and our products.” 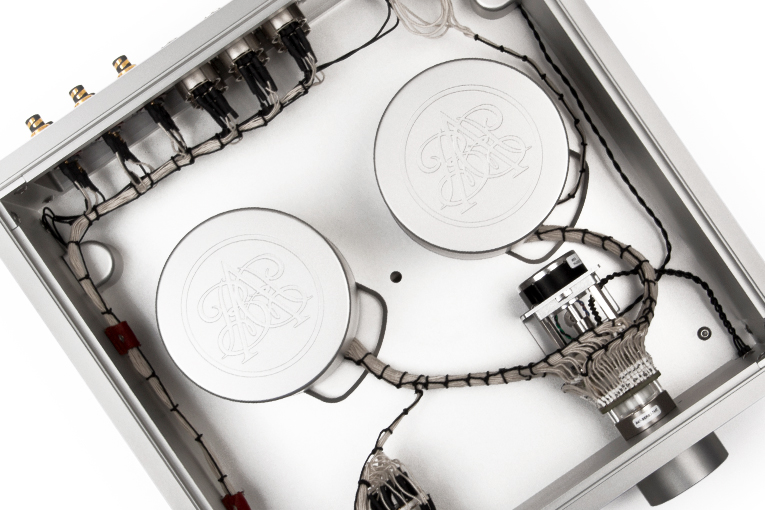 Like automotive brands, Bespoke provides a “configurator” on its site at www.thebespokeaudiocompany.com which allows the client to create the perfect complement of features and finishes. Even though I am not a potential customer -- prices start at £15,000 -- I had a blast fantasising about one with a champagne finish, burr walnut inlay, black trims, and Roman numerals for the inputs, plus a plethora of XLR and RCA inputs and outputs.

Along with the motorised volume control, the Bespoke boasts transformers which provide impedance matching, so cable length ceases to be a concern. Harry did, however, forward a missive from a client in Poland which suggests avoiding certain cables that work perfectly with active preamps but “which have any filters inside, any extra technology or are simply thin.” Naturally, Harry will advise clients in these matters when discussing the design of their units. 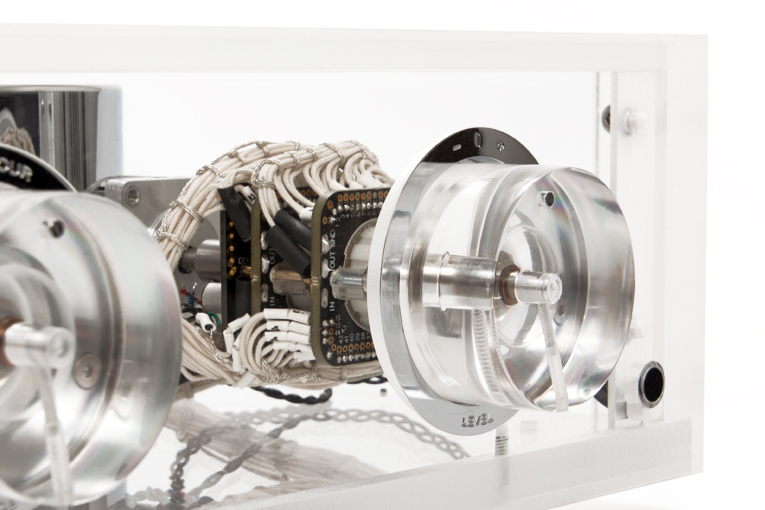 As for the listening? Ghostly silence, sublime transparency. Downside? As is implicit, one is denied the benefits of added slam and impact, which are gain/level-related. Would I love to own one? Emphatically. As for the price, it is what it is. Keep in mind this is being written by one who adheres to the Judeo-Christian work ethic and who doesn’t resent, let alone hate those who, by the sweat of their brow, can afford such luxury items.

Trudeau/Sanders/Corbyn voters: you can always stick to your refurbished Regency TR-1 pocket radios.