Estelon, Amphion Loudspeakers, and Hegel Music Systems: Appealing to Different Customers Inside -- and Now Outside -- the World of Audiophiles

As I write this on June 24, 2017, I’m on a flight from Oslo, Norway, to London, UK, where we’ll have a five-hour layover in London before flying home, to Canada. Sitting next to me is our chief videographer, Chris Chitaroni; beside him is the second cameraman for this trip, Jeremy Prudhomme. Oslo was the final destination of an 11-day, multi-country trip to visit three hi-fi companies and shoot videos for our YouTube channel. Those videos should begin pouring out in August, and will be viewable at www.SoundStageTV.com.

Our itinerary: Estelon, in Estonia; Amphion Loudspeakers, in Finland; and Hegel Music Systems, in Norway. My task throughout the trip has been to conduct video interviews with the people who work at these companies. When we get home, Chris will edit those interviews into compelling narratives about these manufacturers and their products. 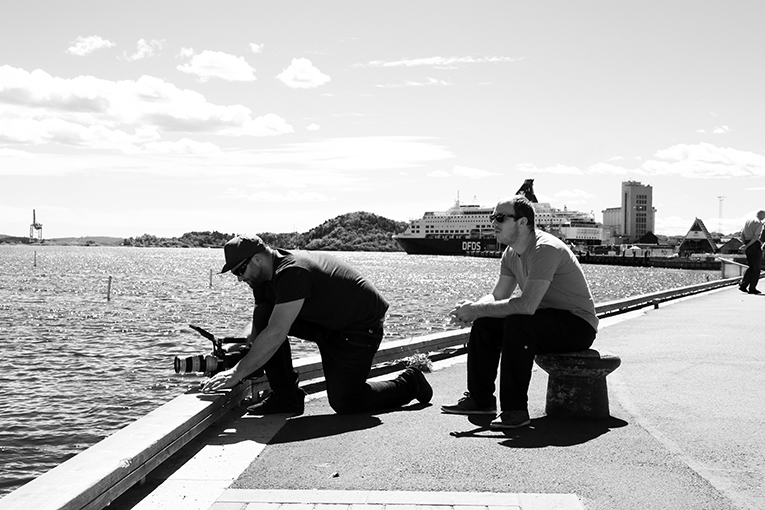 Chris Chitaroni and Jeremy Prudhomme getting outdoor footage in Norway

Each interview is 30 to 45 minutes long, and in conducting them I learned a lot about these companies. Not surprisingly, each does things a bit differently from the others; but after we’d visited all three and I’d been able to digest everything that was said, I found a common thread: While still designing and building products for audiophiles, which is how they all began, each is also diversifying to attract new customers outside that core market. It was the different ways they’re going about this that I found most interesting.

Estelon and Amphion both make speakers, though they’re hardly direct competitors -- Amphion models begin at under $1000 USD per pair and top out at $20,000/pair, while Estelon’s range from about $20,000 to $250,000/pair. Hegel makes only electronics -- preamps, power amps, and digital sources.

Alissa Vassilkova, CEO of Estelon, cofounded the company with: her father, chief designer Alfred Vassilkov; his brother, Valeri Vassilkov; Alissa’s sister, Kristiina Vassilkova; and a family friend, Ernst Paklar. Alissa told me that when the company began, in 2010, Alfred’s goal was what it still is: to build the best-sounding speakers he can, speakers that should also be as good-looking as possible. Their marketing efforts were directed at audiophiles, and they displayed their wares at hi-fi shows such as High End, in Munich, where I first learned of the brand. But while audiophiles still comprise Estelon’s core market, it didn’t take them long to learn that their products, with their topflight build quality and stunning paint jobs, would also appeal to the luxury-goods sector. 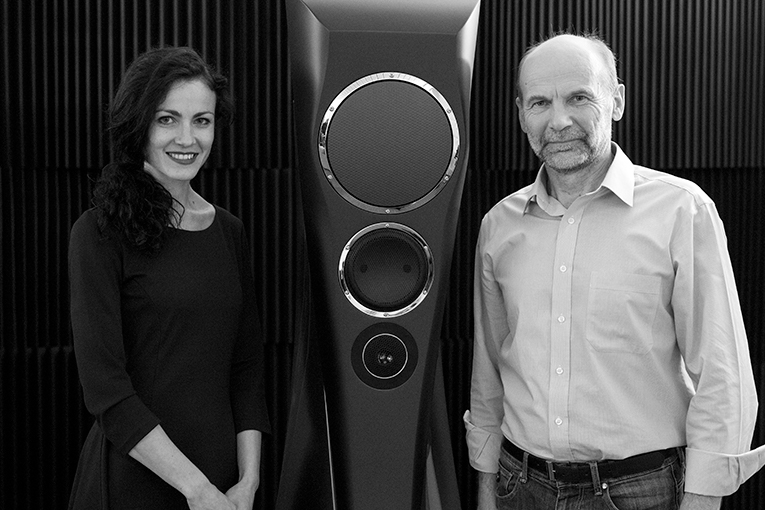 Alissa Vassilkova and Alfred Vassilkov with the Extreme Legacy Edition

So, a few years ago, Estelon began to direct their marketing energies at that sector, even inking a deal with the Rolls-Royce Enthusiasts’ Club (RREC), for which they’ve created a costlier Legacy Edition of their flagship model, the Extreme, that is now their most expensive speaker. This deal almost prevented us from being able to shoot videos at Estelon -- they were in the last stages of producing the first pair of Extreme Legacy Editions, to showcase at an RREC event the following week. Before our arrival, they’d told us they were worried that they might not be able to finish the speakers and meet with us and let us film, but were willing to try. Thankfully, they -- and we -- were able to do it all, as you’ll see in August. 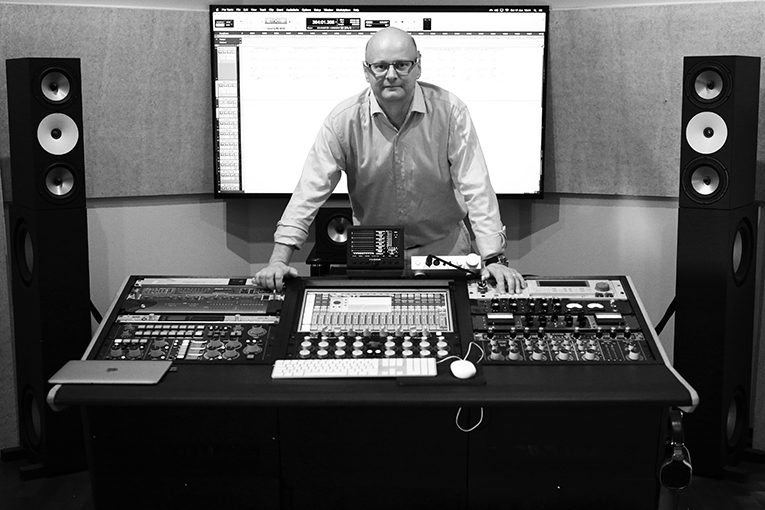 When Amphion Loudspeakers was founded, in 1998, they made only speakers for home systems. But while in Helsinki, on our way to Amphion’s headquarters in Kuopio, we stopped off at Chartmakers East, a recording studio owned by audio engineer Henkka Niemistö, who’s very highly regarded in Finland for his mastering abilities. At Chartmakers he has an all-Amphion speaker system that he loves, and loves to talk about with his colleagues in the fields of mixing and mastering. Such connections and word-of-mouth have allowed Amphion to increasingly move beyond consumer audio into professional audio -- and the company continues to grow. 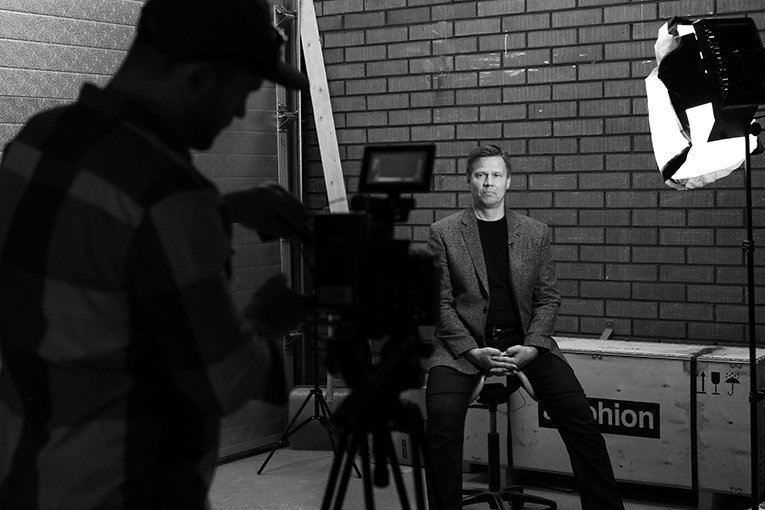 Getting Ready to Interview Anssi Hyvönen

Amphion’s owner, Anssi Hyvönen, now spends many weeks each year traveling to studios around the world, demonstrating and often installing Amphion speakers. In fact, Amphion’s expansion into pro audio has been significant enough that, at their factory, we could see that manufacturing is now split pretty equally between pro and consumer models. Anssi never understood why we cannot use similar-sounding speakers for the studio and home, so he likes the fact that Amphion now designs and makes speakers used at the beginning and end of the chain of recording, postproduction, and playback, which is a dream he’s had since before founding the company.

Hegel Music Systems is by far the oldest of these companies, having been founded in 1988 by Bent Holter, still their chief designer. With their no-nonsense looks, minimum of bells and whistles, strict focus on sound quality, and reasonable prices, Hegel products have always appealed to value-conscious audiophiles, and for many years those were the only customers the company concerned itself with. Like Estelon and Amphion, these days Hegel has a few tricks up its sleeve to expand its customer base, though not into the luxury or pro market. Instead, by incorporating cutting-edge technologies into their latest integrated amplifiers, Hegel is emphasizing convenience. 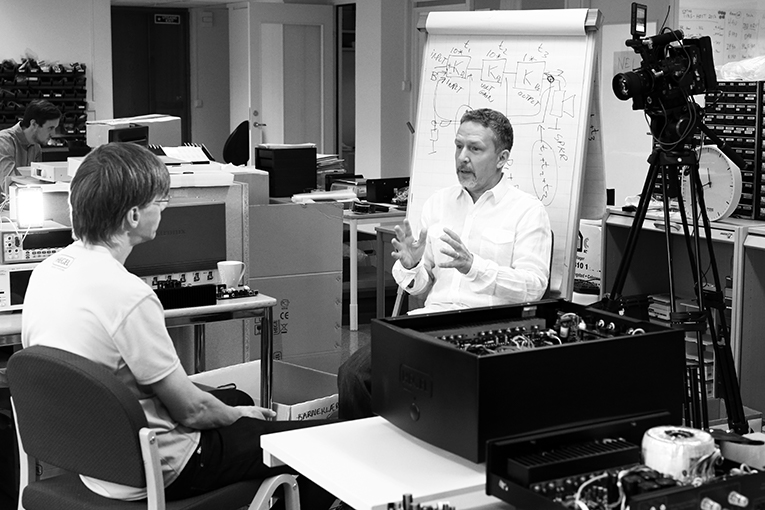 The Röst integrated, which debuted last year, and the recently announced H90, both support UPnP and Apple AirPlay network streaming as well as Control4, which helps make them more versatile and easier to use. For example, at the factory, Hegel showed us how a Röst and an Amazon Alexa can be set up to interface via Control4, to accept voice commands for controlling music playback from a network-attached storage (NAS) device. Very cool! Hegel is betting that with such technologies they can appeal to those who want great sound quality and modern convenience. In continuing their practice of no-nonsense engineering that includes nothing inessential, Hegel will implement only those convenience features that they feel are highly reliable, most necessary, and won’t become obsolete anytime soon.

Ask almost any manufacturer in high-end hi-fi how business is these days and they’ll say something like Times are tough. The audiophile market continues to shrink, with no sign that it will expand anytime soon. All indicators show that the current audiophile demographic is still what it’s long been: older males, with not nearly enough younger males -- or females -- coming into the hobby quickly enough to offset their elders dying off. Another problem is that there are too many companies and products for the current size of the market. My feeling is that if we had only half the present number of companies, there would still be too many -- a view I share with almost everyone in the industry I’ve talked to. Therefore, now, more than ever, if audio companies want to survive, let alone prosper, they need to find new ways to attract customers inside and outside the world of audiophiles.

Our 11-day trip to northern Europe showed me that Estelon, Amphion, and Hegel not only realized that some time ago -- in its own way, each company is already doing something about it.