Almost every hi-fi show presents a surprising number of startup companies showing a new product, or even a whole suite of new models. But by the time next year’s show rolls around, most of these companies have gone out of business.

One reason for the demise of a high-end hi-fi company is the reason most new businesses go under: undercapitalization. It takes a lot of money to keep a business endeavor going. Another reason: In hi-fi in particular, there are so many already-established companies that startups have a hard time muscling their way in to claim a share of the market. I’ve often said that if we had half the number of hi-fi companies we do now, we’d probably still have twice as many as we need. It’s also tough for a startup with no previous track record to seem credible enough to inspire consumers’ confidence in parting with their money. It takes time to build a track record and a reputation. A third reason, just as important, is that a new company’s product(s) might just be not all that interesting, or distinctive enough to stand out from the crowd.

This year’s Montréal Audio Fest, held March 22-24 in Montreal, Quebec, was no exception in this regard, with several new companies whose names and product(s) are unlikely ever to see a second MAF -- or any other audio event. But I saw one new brand whose sole product (so far) seems to indicate that its maker will stick around: Heaven 11, which debuted the Billie, a tubed integrated amplifier named in honor of American jazz singer Billie Holiday.

The Billie, sold factory direct through Heaven 11’s website, is priced at $1450 USD, in black or silver. It has a tubed input stage (two JJ ECC99s), an ICEpower-based class-D amplification stage (60Wpc into 8 ohms or 120Wpc into 4 ohms), an ESS Technology DAC section, a moving-magnet phono stage, a headphone jack, and even Bluetooth compatibility. It looks cool as all get-out and sports top-quality construction, including a case of 1/4”-thick extruded aluminum. And it has one other appealing feature: Though its price is reasonable, its rear panel doesn’t say “Made in China.” The Billie is manufactured and assembled in Canada. 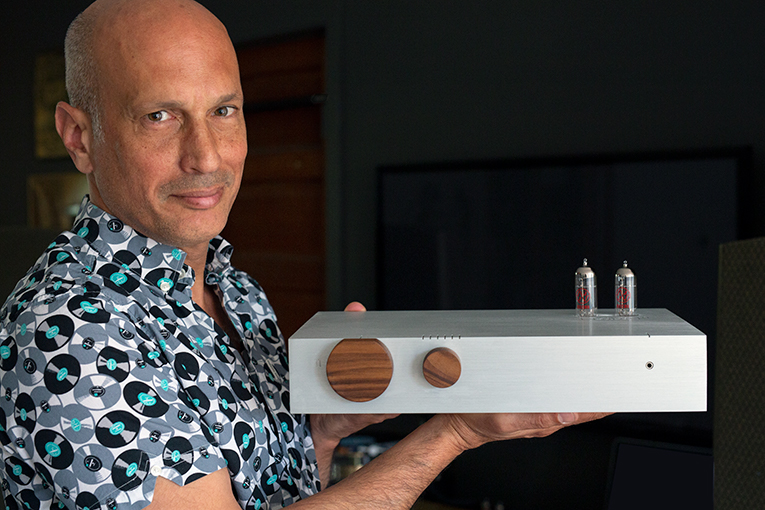 Itai Azerad and the Billie

Gordon Brockhouse wrote about the Billie for SoundStage! Global in our on-the-spot coverage of MAF 2019, and Diego Estan included it in his post-MAF report on SoundStage! Access. Both thought the Billie an intriguing product that stood out from the crowd for its interesting design and features and reasonable price. I agreed, but my admiration for it grew after the show, when I called Heaven 11’s founder, Itai Azerad, and learned a little about how much care and attention have gone into the Billie’s design, and how he named his company. He told me that the “11” is a nod to This Is Spinal Tap’s “These [amps] go to 11!” scene. I met him at his office in Montreal on July 15 to learn more about the Billie’s genesis, and where Heaven 11 might be headed.

Azerad, 50 years old, is an industrial designer with experience in furniture design. He’s also an audiophile. Some years ago, he realized that the home-theater speaker systems and all-in-one Bluetooth speakers so popular nowadays “aren’t good for music.” He also knew that most people have only so much money to spend on gear, and want something that looks good in their home. So he conceived the Billie as an affordable, attractive-looking, distinctively featured, unique-sounding gateway into serious hi-fi. He also knew that, perhaps to the chagrin of many audiophiles, it was necessary to include Bluetooth compatibility, so that anyone with a smartphone -- these days, almost everyone -- will need to add only speakers and speaker cables to have music in the room. However, with its two TosLink digital inputs, two analog inputs, and phono stage, the Billie can also connect to real music sources. 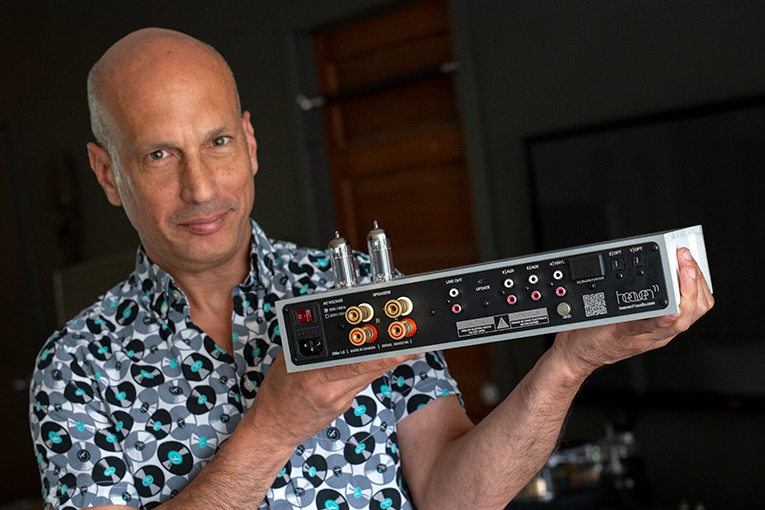 In making the Billie a reality, Azerad faced two challenges. First, he needed money to create the product and avoid the startup pitfall of undercapitalization. Second, he needed someone to execute the circuit design. In July 2016, he launched a Kickstarter campaign that raised more than $100,000. Electronics engineer Robert Lefebvre helped Azerad build a prototype of the Billie, and asked for nothing in return. Azerad stressed to me how much he continues to appreciate Lefebvre’s help.

With enough money in hand and a functioning prototype, Azerad was now able to hire two electronics engineers to take the Billie to the next step. Denis Rozon, whose expertise is in tube circuitry, designed the preamp stage; Sylvain Savard, with expertise in solid-state and test gear, designed the rest of the innards, including not only the signal path but the control circuitry for the source selection, muting, Bluetooth pairing, etc. Azerad was in charge of designing the Billie’s case and getting it built, for which he lined up suppliers in and around Montreal. Not only is the Billie made entirely in Canada, it’s made entirely in the province of Quebec.

From the start, Azerad was bent on using an ICEpower-based class-D power amplifier -- the technology is powerful enough, and, he told me, he’d heard ICEpower sound good with other products. But for the preamp stage he wanted tubes, for their richness and musicality. The result is a relatively powerful integrated with a smooth, pleasing sound. I gave the Billie a brief listen at Azerad’s office, driving Quad ESL-2905 electrostatic speakers, and was taken aback by how refined it sounded: excellent clarity, lots of detail, and, especially, a top end that was clean, effortless, and extended. And this was with electrostatic speakers, which are typically difficult to drive. 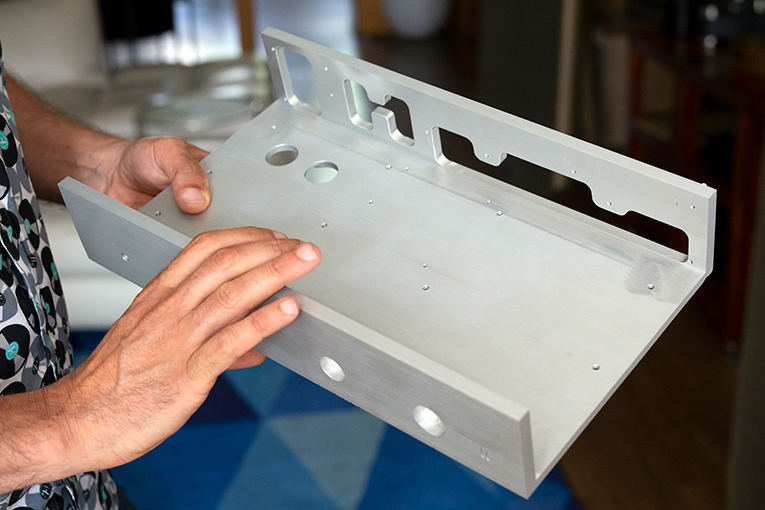 But a high quality of sound and a low price weren’t enough for Azerad. Being an industrial designer, he knew his amp had to look stylish in a traditional living room, as well as function intuitively. For the look, he came up with a slim case of extruded aluminum -- the two tubes protrude from the top panel, which is accented with a CNC-engraved Heaven 11 logo. All labels on the rear panel are also laser-engraved -- no silk-screening here. 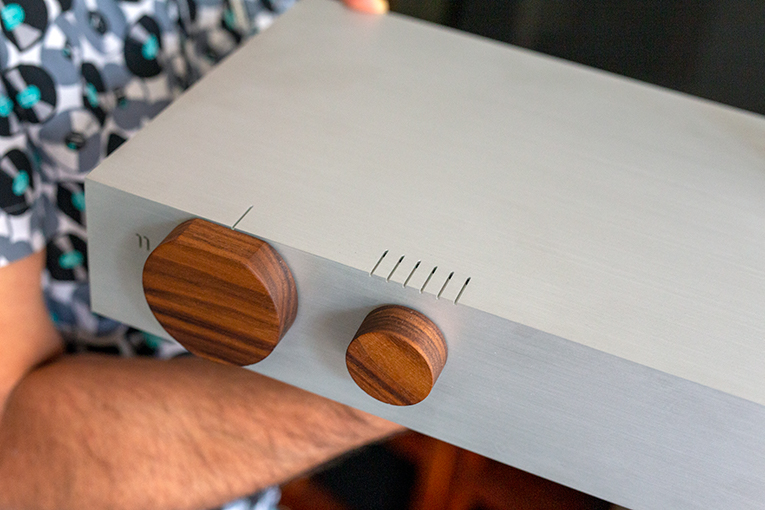 Another unique touch is the Billie’s control knobs of solid walnut -- unique not because it’s never been done before (it has), but because the appearance of these knobs varies from unit to unit. Azerad showed me how knobs from the same batch differ in their grain and in how deeply and darkly the finishing oil permeates their surfaces. 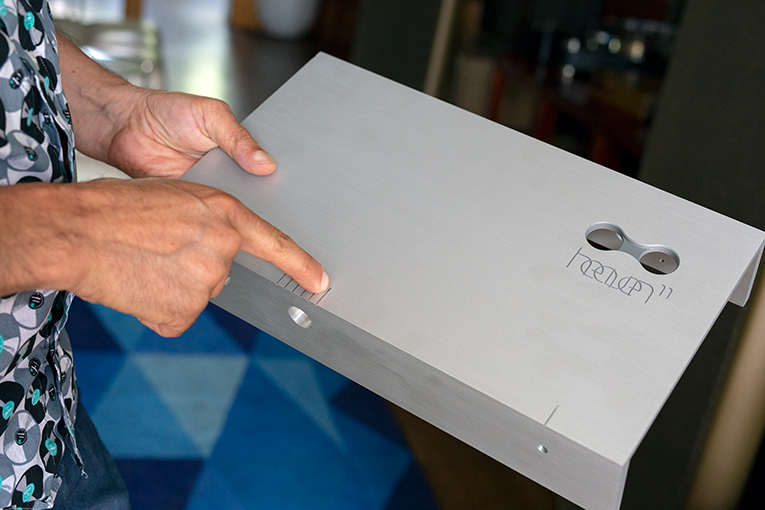 Azerad also chose simplicity of function by limiting the number of controls -- on the front are only a large volume knob and smaller input selector -- while wanting operation to be thoughtful and intuitive. For example, when the Billie is first powered on, LEDs under the tubes flash for about 30 seconds, until the tubes are fully warmed up. Unlabeled notches cut into the top front edge of the faceplate, just above the selector knob, indicate the input selected and correspond to the inputs in their order on the rear panel. When an input is selected, its LED glows bright amber to indicate selection, after which it dims slightly. Before a Bluetooth-compatible device is paired, that input’s LED glows blue; after successful pairing, it turns amber. Pressing the input knob mutes the Billie’s output, causing the LED for the input selected to flash in what Azerad calls a “breathing pattern” -- in other words, a relaxing pulse. When headphones are plugged in, the speaker outputs are automatically turned off.

The brand and model names, the product design, and the reasonable price should go a long way toward helping the Billie and Heaven 11 become successes. There are many other forces, of course, that can push a new company and its product(s) into the abyss, but from what I’ve seen and so far heard, Heaven 11 seems better positioned than most startups, as evidenced by its successful Kickstarter campaign and product launch at Montréal Audio Fest 2019. 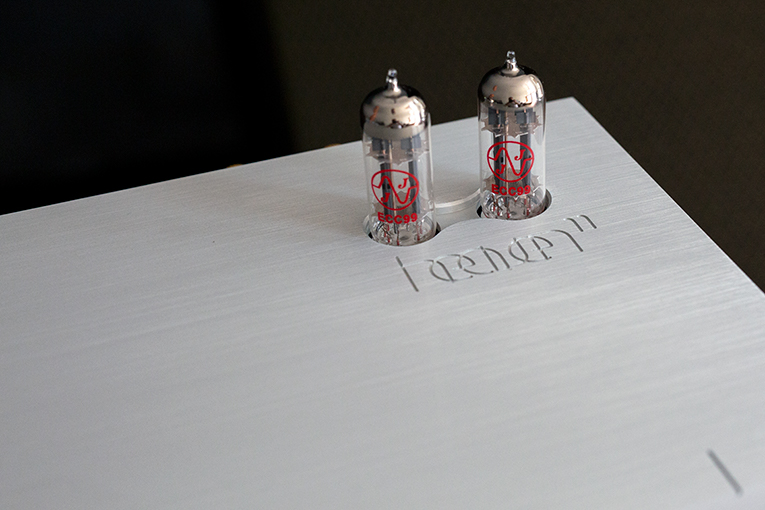 The next steps are being taken. I’ve asked Itai Azerad to send me a review sample of the Billie to try in my home, and it’s en route as I write this. By the time you read this, I should be listening to it; I plan to write it up in my “System One” column sometime soon. Azerad is already at work on his next products, though he told me he’s moving cautiously. He’s already fulfilled all his Kickstarter orders for the Billie, and told me he’s sold a pretty good number of Billies since then, but needs to sell more before his company can enter its next phase -- that is, before Heaven 11 is well capitalized.

That’s one reason he’s brought out the limited Billie Heaven’s Angels Edition of just 11 units, numbered 1 to 11, priced at $1650. It’s basically the same Billie, in black or silver, but with custom graphics on the top of the case, and with Gold Edition JJ ECC99 tubes, which are better than the standard JJs. I see no reason he shouldn’t sell plenty of Billies, and all 11 Heaven’s Angels Billies, in short order. If he does, we should see Heaven 11 at Montréal Audio Fest 2020, and at plenty of other shows in the months and years to come.