We Are 25 Years Old — And Some Other Things You Might Not Know About the SoundStage! Network

November was going to be a really big month for us — it marked the 25th anniversary of the SoundStage! Network. But with all the COVID-19 lockdowns around the world, resulting in people being cooped up in their homes, businesses shutting down, travel being restricted, and events being canceled, we decided to postpone all the plans we had made for celebrations until next year. However, I still think it’s worth marking the milestone here this month by highlighting a few interesting things about our founding that many people — including most of our writers, since I’m the only person who’s been here from the beginning — don’t know. 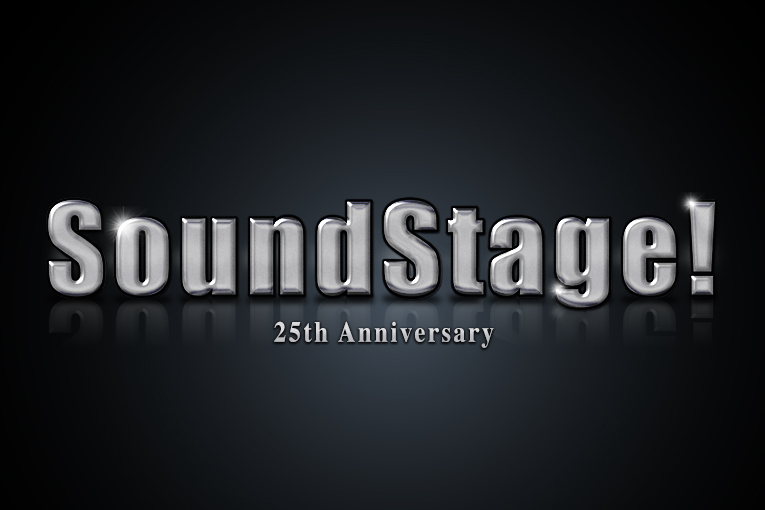 Before I began making a living by writing about hi-fi equipment, I worked in the computer industry. In 1995, I was employed as a programmer and network analyst for a Canadian government-owned corporation. At that time, the Internet as we know it today was in its infancy and I was keen to learn something about it. As far as I can remember, it was in October of that year that I hunkered down in my cubicle and figured out how to set up a website that people anywhere in the world could access via the Internet. This made me realize how easy it was to make all kinds of information accessible to everyone. I also knew, right then and there, that the Internet was going to change the way the world communicated. It was going to be a really big thing, and I wanted in.

Because I was already communicating electronically with like-minded audiophiles around the world, my first idea was to create a simple website, more or less resembling an electronic newsletter, with information about high-fidelity audio reproduction. However, I knew that I was going to need some help to get this project off the ground.

Before the Internet got up to steam, a bulletin-board system (BBS) was the way to communicate and share information on any number of topics. These BBSes were the precursors to the Internet-based forums and chat groups we see today. Back then, however, you had to “dial in” to a BBS with an ultra-slow modem hooked in to your phone line. And if the BBS you wanted to access was located on a server in another city or country, it could be expensive — long-distance phone charges weren’t cheap — but it could be worth it if the information on the BBS was important to you.

For 1990s-era audiophiles, the BBS was The Audiophile Network (TAN), which was founded and maintained by Guy Hickey in Van Nuys, California. I don’t know how many members TAN had, but I’d guess it was at least in the hundreds, if not thousands. But, most importantly, its membership included the who’s who of hi-fi at the time. Names that pop immediately into mind include George Cardas, founder of audio cable maker Cardas Audio; Les Edelberg, who created the power-conditioner company Audio Power Industries; John Atkinson, editor of Stereophile magazine; and Tyll Hertsens, founder of the headphone-amp company HeadRoom, who went on to headline the now-defunct InnerFidelity.com headphone website. These guys were already stalwarts of the audio industry and members like me were happy to be able to talk to them, even if it was only through electronic messages.

Like the many hi-fi audio forums that still exist today, TAN was a breeding ground for talented audio reviewers. One of the most gifted and prolific TAN contributors was Lonnie Brownell, a surfer and programmer from California whose lengthy, witty posts were always a joy to read. In fact, because of his TAN posts, he was eventually recruited by Stereophile as a writer and contributed a few reviews there before stepping out of the hi-fi limelight completely. Another was Kal Rubinson, a neuroscientist from New York City who was also recruited by Stereophile and still writes for the magazine today.

TAN was obviously the place to find collaborators for my Internet project, but I was a nobody in the hi-fi world; also, the Internet was such a new thing that there were no hi-fi websites anywhere yet, and anyone I asked to help would really be going out on a limb. Yet, right off the bat, I found two guys who were interested in contributing articles for my website: Dave Duvall and Doug Blackburn. 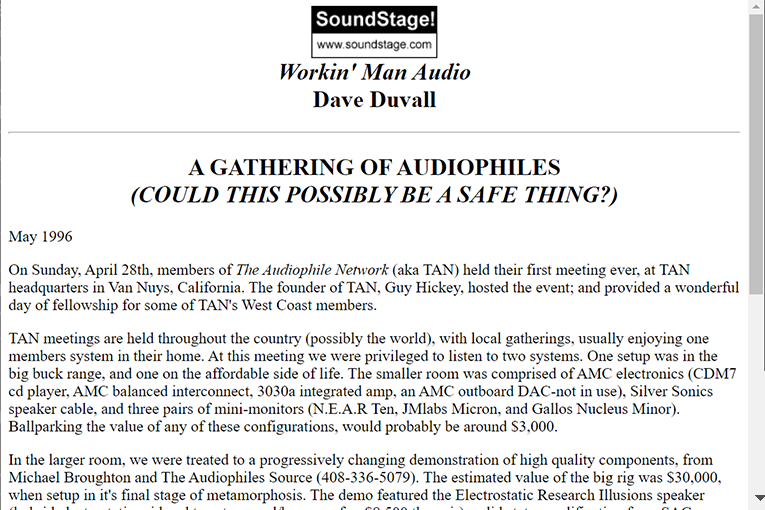 Our first articles appeared in November 1995, and we progressed from there. At that time, Doug Blackburn was working for Kodak in Rochester, New York. He contributed for around 15 years, but when he retired from Kodak and moved to Colorado his output slowed down. Dave Duvall contributed to the website for a couple of years until he decided to focus on a business he’d taken over in California.

After those two helped kick off the site, many others followed. In fact, over the 25 years we’ve been in business, over 120 contributors have been involved with us in one way or another. We also still have some who joined us in the 1990s, such as Jeff Fritz, our editor-in-chief; Roger Kanno, a senior contributor; and Karen Fanas, our art director. Some contributors have even gone on to create their own websites. But if it wasn’t for Dave, Doug, and, of course, Guy Hickey’s TAN, I’m not sure that the original site and the network of sites we currently have would’ve unfolded the way they did. Unfortunately, TAN never made the transition to the Internet and went the way of many other BBSes — but I know a lot of people remember it as fondly as I do. 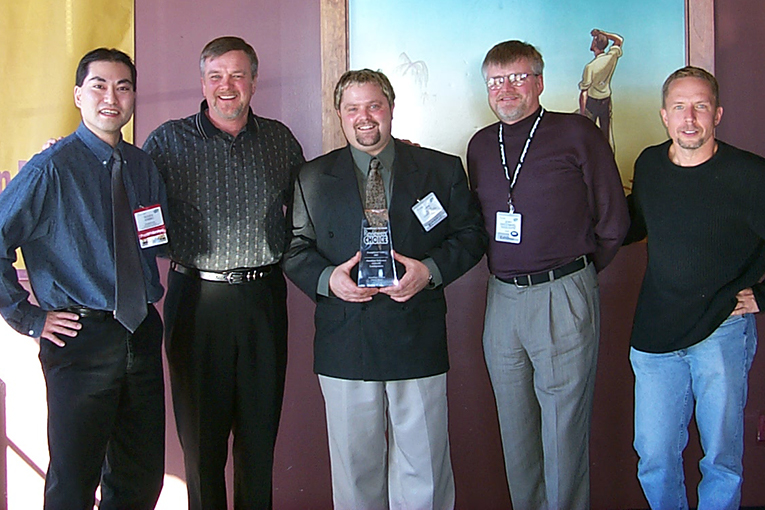 I’m not sure why, but once I knew that I wanted to develop a website for audio enthusiasts, the word soundstage popped immediately into my mind as a good name for it. But when I first typed “Soundstage” and displayed it with a large font on a web page, it didn’t look right — the letters looked unbalanced. I tried “SoundStage,” which was a step in the right direction. Still, to my eyes, the small “e” at the end made the title seem incomplete, so I added an exclamation mark to finish it off — SoundStage! — which is the way it has remained. It has also been trademarked that way.

Back in the 1990s, it wasn’t the SoundStage! Network. It was just SoundStage! — one website, not the nine we have today. Furthermore, in 1995, I hadn’t even thought about getting a proper domain name for the site, which wasn’t uncommon back then. You see, in the early days of the Internet, people like me who were just getting going spent more time worrying about the content of the website than the domain name. Before Google took over the world, people just typed the name of the website in their web browser, just as they had typed the phone number of a BBS into their telnet client. It wasn’t uncommon for websites of the time to simply use the host server’s domain name suffixed with a user-account name, with a forward slash and a tilde character (~) between them. For example, although I can’t remember exactly what URL we had, I believe it was something like www.magi.net/~das. The “magi.net” part was the domain name of the hosting company (or of the company renting the server space that hosted the site), while “das” are my initials. You typed that into your web browser and you got to SoundStage!, the world’s first online hi-fi magazine — but don’t bother trying that now, since it won’t come up anymore. 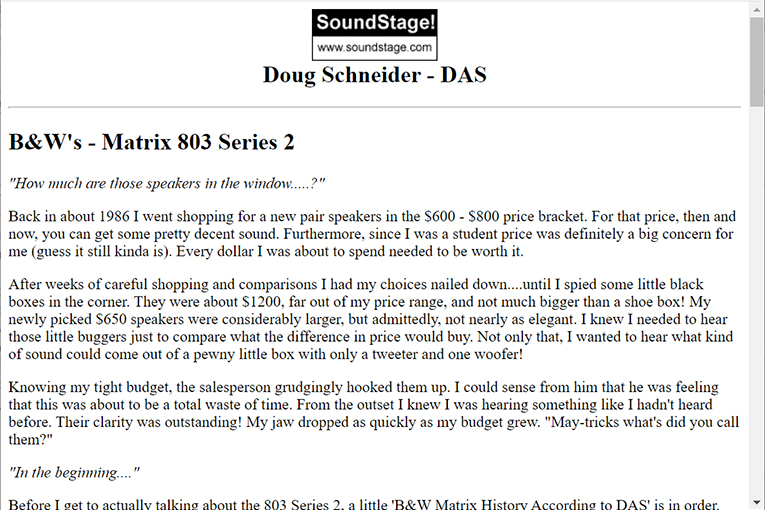 One of my earliest speaker reviews

Sometime in 1996, when the site was getting known around the globe, I realized it was going to be an ongoing venture and I would need a proper, recognizable domain name. Unfortunately, at that time, soundstage.com had been registered by a firm in Hollywood — likely, one that owned a soundstage for film and/or TV production. As a result, I had to settle for sstage.com, which was short and sweet, but disappointing because it wasn’t the site’s real name.

As luck would have it, there was someone watching out for me, probably because I’d previously done a similar favor for him. At around the same time as I was learning about the Internet, Gilbert Yeung formed Blue Circle Audio, a manufacturer of preamps and amps. Like me, Gilbert went looking for a domain name and found that bluecircle.com and bluecircleaudio.com were already taken, so he had to settle for bcircle.com. But one day, as I was searching for domain names I might like more than sstage.com, I’d noticed that bluecircle.com had become available — whoever had originally registered it didn’t re-register when the annual expiry at the registrar came up — so I immediately called him and he snapped up the domain name. It was about a year later that he noticed soundstage.com opening up for a similar reason and repeated the favor. Gilbert phoned me to let me know and I immediately registered it. Finally, people could find us by our full and proper name. And reflecting now, 25 years later, I don’t think I could’ve picked a better name for the kind of content we produce. It’s also worked remarkably well to brand our other sites as we have grown. 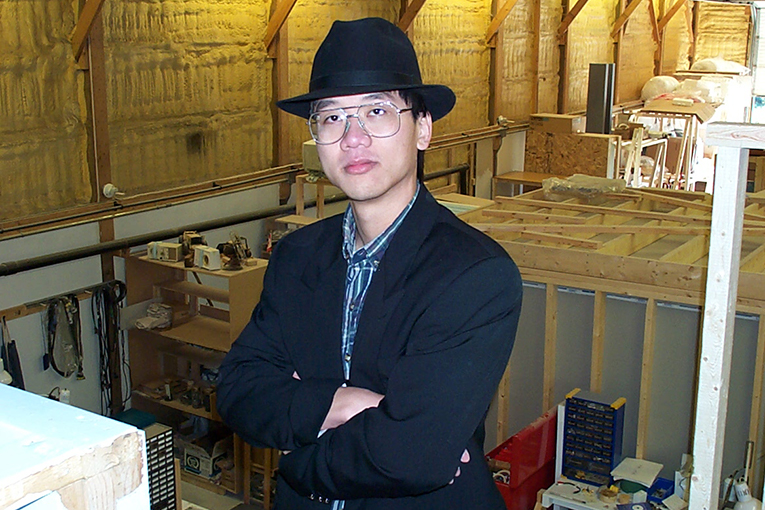 Blue Circle’s Gilbert Yeung in May 1999

When I began writing this article, I only intended it to be a one-off piece to celebrate our first 25 years in business, with a few stories about our founding sprinkled in. But as I was thinking about those early days, I realized that there were so many other stories I could share. For example, there was the time at CES 1998, in Las Vegas, when the president of one major hi-fi company took me aside and called the Internet “a fad” to my face, presumably as a way of dissuading me from continuing with this upstart adventure. Then there was learning how to do on-the-spot show coverage from Tyll Hertsens, who was running HeadRoom at the time. He’d tried to do it unsuccessfully at Stereophile’s Hi-Fi ’97 event, which was held in San Francisco. We learned a lot from his attempt and used it as the springboard for our own coverage. There was also the time when we finalized our first contract with Canada’s National Research Council to perform speaker measurements at their facility, which gave our speaker reviews a boost, since no other magazine anywhere had access to an anechoic chamber like theirs. Paul Barton, founder of PSB Speakers, was instrumental in helping to get that going. (Axiom Audio recently interviewed me about it and produced a video you can watch on YouTube.) Of course, there is also the story about when we figured out that one website wasn’t enough, which is how the SoundStage! Network was born. 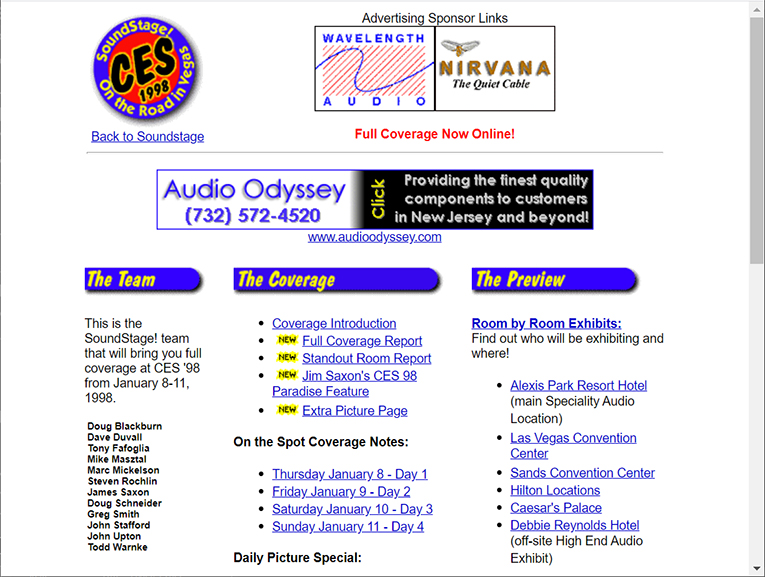 Perhaps one day I’ll tell these stories, as well as some others. For now, I’m more interested in focusing on creating a better 25th-anniversary celebration for our group of publications when COVID-19 is mostly behind us, and improving what we do now so there’ll be plenty to say about our next 25 years.