Not Quite a Vinyl Epiphany, but Close—My Brief Encounter with a DS Audio Optical Cartridge

Around the middle of last month, I was at SoundStage! Hi-Fi writer Jason Thorpe’s place, which is in Toronto, Canada, helping him take photos of a Kuzma turntable he had in for review. While we were shooting photos, Jason was rattling on about me having to hear his system before we left for supper.

I didn’t tell Jason, but listening to someone else’s system just because they want me to doesn’t thrill me, mostly because I have to listen to so much hi-fi gear all the time. But Jason was so insistent, and he’d been raving so much about the DS Audio DS 003 cartridge and phono preamplifier he reviewed on this site in July, that I figured I couldn’t really say no. After all, I was already there. 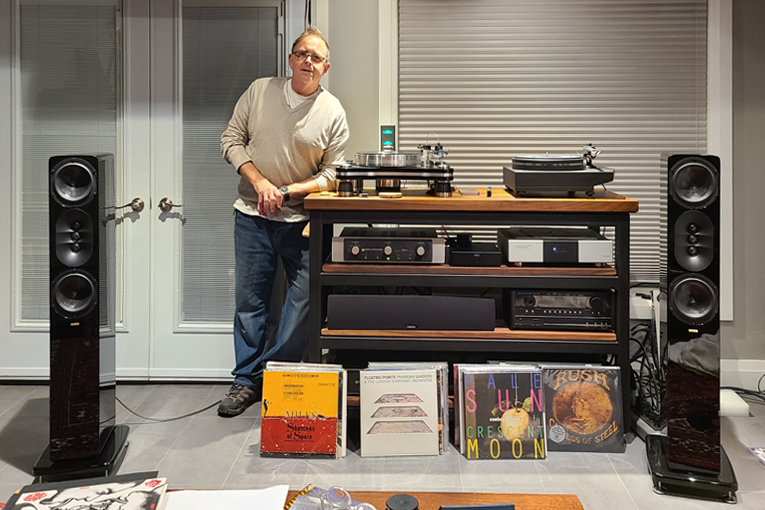 Jason Thorpe with his system

DS Audio’s products are designed and made in Japan. The firm’s cartridges are unique in that they don’t generate an electrical signal the way traditional moving-magnet and moving-coil cartridges do. As Jason described in his review, LEDs inside each cartridge “shine toward the rear of the cartridge, and at the back are sensors—‘photo detectors’ in DS Audio’s parlance. Between the LEDs and the photo detectors is a thin, lightweight plate attached to the cantilever that casts a shadow over the sensors. As the stylus tracks the record, the plate moves and varies the shadow it casts on the sensors, allowing more or less light to hit them. This variation in light generates an analog (not a digital) signal.”

Because DS Audio’s cartridges work differently than traditional cartridges, they require a special kind of phono preamplifier. Naturally, DS Audio makes some to support its cartridges. But other companies are now making compatible preamplifiers—Jason was using an EMM Labs DS-EQ1 optical phono preamplifier, which he wrote about last month. But the rest of his system was the same as it had been in the recent past: VPI Prime Signature turntable, Sonic Frontiers SFL-2 preamplifier, Bryston 4B3 power amplifier, Aurelia Cerica XL speakers, and Audience cabling throughout. 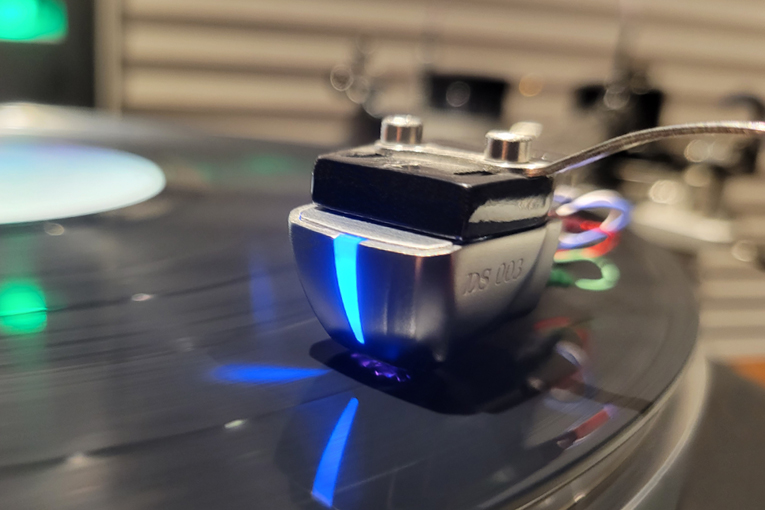 Jason tried to make my listening session more pleasurable by bringing out one of my favorite recordings: The Caution Horses, which was released in 1990 by Canada’s Cowboy Junkies. He even asked me which track I wanted to hear first. That was easy: “’Cause Cheap Is How I Feel.”

Not long after the needle dropped, it was apparent why Jason really wanted me to hear his setup that day—it sounded better than it ever had before. The sound coming from his speakers was clearer and much more dynamic, and Margo Timmins’s singing voice punched through the mix to the forefront of the soundstage in a rather startling way. I also marveled at the crispness of the sound of what I think is drummer Peter Timmins’s rimshots. I turned to Jason and said, “Don’t take this wrong, but your system has the dynamics and clarity of a good digital system now.” Vinyl guys don’t like to hear that their systems sound like digital, but it was meant as a compliment; and Jason took it as that. 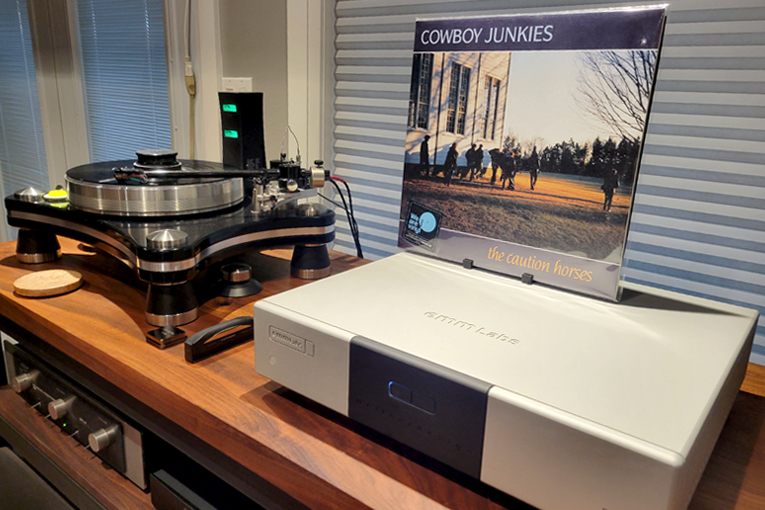 I asked Jason to play a couple more tracks from The Caution Horses before moving on to Fleetwood Mac’s Rumours, which is another album I know and love. With Rumours, we began with “Dreams.” I was taken aback by how deep and powerful the bass sounded. Bass had never sounded like that at his place before. I was also smitten by the clarity of Stevie Nicks’s angelic-sounding lead vocals, and by the amount of recorded detail that was being presented. The highs were a little soft, mind you, but I know they aren’t prominent in the recording; so that aspect was difficult to criticize. All in all, it sounded incredible and made me rethink how good vinyl can be. Most vinyl-based systems don’t impress me that much—perhaps because I’m privy to such good digital components.

After we had listened to a few more tracks from Rumours, Jason and I went for dinner and talked about many things not related to his DS Audio–based system. Actually, DS Audio never came up again that night. 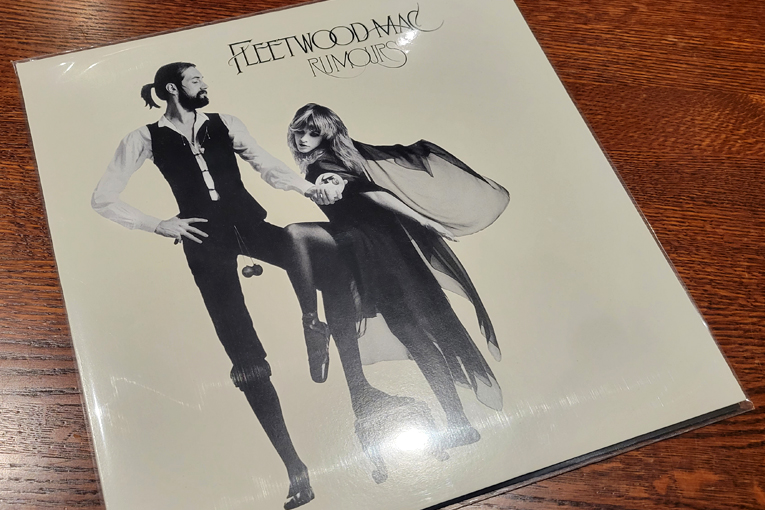 But I couldn’t forget about the dynamic, clean, incisive sound I had heard from Jason’s system. So much so that I phoned Jason the next day as I was driving home to Ottawa, and asked: “Was I imagining it, or has the sound of your system improved a lot?”

“If you had to put a number on it—a percentage—what would it be?” I pressed.

“That’s about right,” he replied.

“And is that all because of that cartridge?” I asked.

The answer was yes. Then he said, “Now you know why I can’t go back.”

He was talking about going back to a moving-coil cartridge, which had been his reference until then. It was obvious why he couldn’t—his system was sounding better than ever before with that DS 003 cartridge in place. Taking a step back is something no audiophile can willingly do.

That experience at Jason’s was admittedly brief, but it left such an impression on me that I began thinking there might be some substance to all the raving about DS Audio that I had heard lately from Jason, legendary hi-fi designer Ed Meitner, and Ed’s son, Amadeus Meitner. 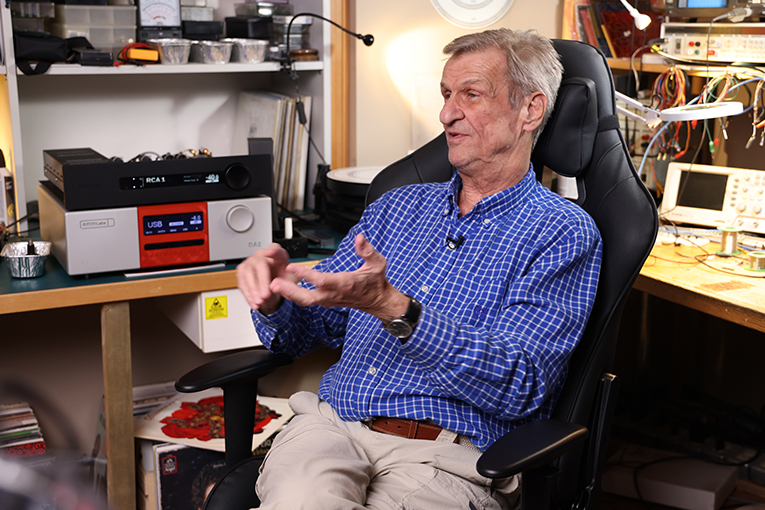 Ed is the founder of EMM Labs and Meitner Audio, two companies I had visited just before I went to Jason’s. I had talked to Ed at length, and he sounded genuinely excited about the DS Audio optical-cartridge technology. I could tell Ed was serious when he told me that he believed it was far superior to current moving-magnet and moving-coil cartridge tech. This was partly because of the superior sound, but also because, as a designer himself, he saw it as the first real technical advancement in vinyl playback in a very long time. Amadeus is also a big fan—he’s the one who got Jason to try the DS Audio products in the first place.

Ed and Amadeus, through their brands, are backing up their enthusiasm for the new technology with two new products: the EMM Labs DS-EQ1 and Meitner Audio DS-EQ2 phono preamplifiers. These are both compatible with DS Audio cartridges, but not with MM or MC designs; even though, according to Amadeus, it wouldn’t have been that hard to add circuitry to support traditional cartridges. But Amadeus told me that Ed simply will not design an MM or MC phono preamplifier anymore, because he believes such age-old cartridge technology is too crude and too flawed. Ed clearly thinks optical cartridges are the way forward.

That brief experience at Jason’s and the commitment that the Meitners have shown for DS Audio’s technology has now sent me down a DS Audio rabbit hole, but not in the way you might think. I don’t have a DS Audio cartridge mounted on my turntable yet, but I’ve got my hands on the Meitner Audio DS-EQ2, which Jason will be reviewing soon. A few weeks ago, I sent it off to our SoundStage! Electronics Measurements Lab, along with the DS Audio DS 003 phono preamp Jason has reviewed, so our measurements guru Diego Estan can measure them both thoroughly. The goal is to see if there are objective measures that can help to show why this technology sounds as good as Jason, Ed, and Amadeus say it does. Unfortunately, we have no way to measure the cartridges themselves—yet—but you never know what the future will hold in that regard.

Even though we can’t do anything with the cartridges, I have a feeling the measurements on the preamplifiers will at least tell part of the story. Ed Meitner told me that he believes one big benefit with the DS Audio optical tech is that the company’s cartridges have a much higher output than moving-coil or even moving-magnet designs. This means the accompanying preamplifier doesn’t need to supply nearly as much gain, so there should be less noise and distortion than is typically found with MM or MC phono preamplifiers—as long as the circuitry is well designed. Another benefit is the fact that the output of DS Audio’s cartridges requires far less equalization to conform to the industry-standard RIAA specification for vinyl playback, so there should be less phase shift throughout the audioband than happens with playback from traditional cartridges.

But there’s a bit of a learning curve with these measurements for DS Audio-compatible phono stages, because the measurement setup is different from what’s required for traditional phono preamplifiers. Thankfully, Diego has been in contact with the DS Audio engineering department, and the company has been exceedingly cooperative with us in terms of building a test environment around our Audio Precision APx555 analyzer to derive meaningful measurements for DS Audio-compatible phono preamplifiers. 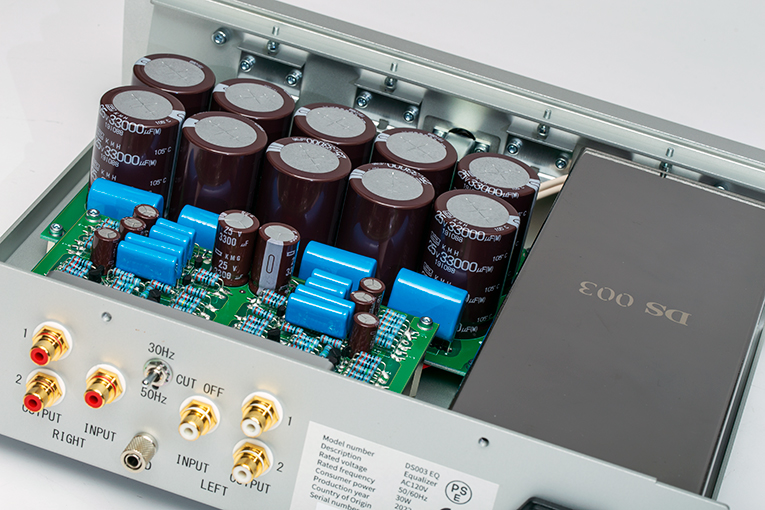 That process now seems complete, which is exciting for us. Just before I typed these words, I was on the phone with Diego, who told me that, after a couple weeks of tests and experiments, he feels he has the procedures mastered and will have data for us to publish before this article goes online. So if you read Jason’s DS Audio DS 003 cartridge and phono preamplifier review now, the link for the DS Audio preamplifier measurements should already be there. I suspect that Diego will have done the DS-EQ2 measurements before this article goes live, as well; but Jason hasn’t finished his review of the Meitner stage yet, so those measurements won’t be published for a month or two. You’ll just have to hang tight for them! And when Diego is done with those two phono stages, he’s going to measure the EMM Labs DS-EQ1 stage that Jason reviewed last month, and add the measurements to that already-published review.

The SoundStage! Network is now fully committed and prepared to take a deep dive into DS Audio’s cutting-edge cartridge technology, which we think is a major step forward in vinyl playback. We believe that the market for these cartridges and associated phono preamplifiers will continue to grow—mostly because of the quality of playback that they can provide—so it’s in the public interest to do so. In fact, it’s now got me thinking that I might need to get a DS Audio cartridge and compatible phono preamplifier for my own turntable—because just as it’s been for Ed Meitner, it’s the only thing that’s gotten me excited about vinyl in a very long time.