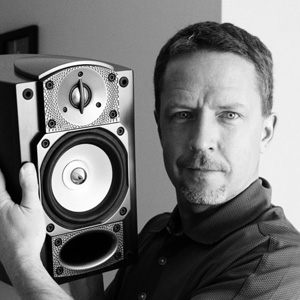 In January, I wrote about loudspeaker measurements and the people who are the most interested in them. If you read that article, you'll know that although anyone can find measurements useful, it's speaker designers who make the most use of them.

But designers don't rely on measuring alone, and neither do audio reviewers. Listening, too, plays a vital role in both disciplines -- in fact, it's the overriding factor in any product design and in any review. If something doesn't sound good, it doesn't matter what its measurements look like.

But that fact isn't reflected in the measuring-vs.-listening debate that is endlessly played out in the audiophile press. For some strange reason, many audiophiles take a black-and-white approach to measuring and listening, believing that one or the other is most important; in other words, they think the designer or reviewer listens or measures, but doesn't do both. This is nonsense. Designing today's high-performance speakers requires a combination of measuring and listening -- and something else few consider: computer-based modeling.

The best way to understand how loudspeakers are designed today, is to to watch a good designer at work, which I've done many times in the more than 15 years I've been reviewing. In that time I've learned two main things: 1) no two designers will create speakers in exactly the same way, and, despite that 2) any two speaker designers will share enough general practices to make their working procedures quite similar. It's those similarities that I focus on here. (I should point out that "designer" can mean a single person or a team. Different companies work in different ways, with differing numbers of staff for any given project. In the interest of brevity, I use designer here to indicate one or a few or many designers.)

First, no competent designer today starts out by simply screwing drivers into a box, whipping together a crossover, listening to the result, and calling that the start of his design work. That's not to say that no one does that -- there will always be a few genuine hacks out there.

Instead, high-performance loudspeaker design today begins with some combination of computer modeling and measuring, and it is in the proportions within this combination that wide divergences of design methodology occur. How much modeling and measuring are done at the beginning of a project depends on what tools are available to the designer, his skills in using them, and his depth of understanding of the correlation of modeling and measuring with what he hears. Designers who are more advanced in these regards do a lot of work with computers and measurements up front; others are pretty far behind, meaning their modeling and measuring might be minimal. In my opinion, the designers with the most advanced understanding of measuring and modeling have the greatest "command of the technology," as Dave Nauber, of Classé Audio, phrased it. Such designers are in full control of every aspect of a speaker's design, with no guesswork.

Having such a command of the technology is important because, these days, there's not as much black magic to speaker design as some people think: Most of what goes into a competent design is governed by good science and good engineering. As a result, some computer modeling systems are targeted at specific aspects of speaker design -- drivers, crossovers, cabinets -- while others can model an entire speaker system in a virtual world, with results that will match, with astonishing accuracy, the real-world technical performance of a physical prototype of that design. But you have to know how to use these tools. It's no different from any other task -- I can go to Home Depot and buy all the tools I need to build a house, but to actually build that house, I have to know how to use those tools.

As for what level of measured performance to strive for, there are some well-known parameters, aspired to by all good speaker designers, that correlate well with good sound: wide bandwidth, a generally flat on-axis frequency response, well-controlled dispersion, optimum phase integration in the crossover region, low distortion, etc. These can be optimized in a computer model before a prototype is actually made. Then, when a prototype is built, it can be measured, and those measurements compared with the virtual model's specs, to verify how accurately the computer model has been translated into physical form, and then to refine the results.

The amount of modeling and measuring that's done before any serious listening begins varies with the designer. However, among competent designers who are well versed with and have access to good computer and measuring tools and know well the parameters they're trying to meet, my guess is that at least 80% of their design work is done before their ears get involved. That's not to say that listening isn't important -- that final 20%, or whatever it may be, is what matters most.

My experience has shown that this listening stage, which is sometimes called voicing, is primarily done to verify the computer- and measurement-based predictions and to refine the sound. Perhaps a more accurate term would be final voicing; the best designers, those who have strong skills in measuring and modeling, know how to voice a design even in those early stages, before they've listened to it.

Another variable is how the listening process factors into the overall design process -- but most designers, I've noticed, tend to take one of two approaches. For some, it's a linear progression from modeling and measuring to listening, with no going back: once they start listening to their prototypes, they start tweaking them, and continue until they're satisfied with what they hear -- they don't rely on measuring and modeling ever again. For other designers, modeling, measuring, and listening comprise an iterative approach; until a final design is arrived at, there's a constant back-and-forth among the three stages.

In my opinion, the latter, iterative designers usually have a better, more complete understanding of loudspeaker design -- that command of the technology I referred to before. That's because they can better tie their modeling and measuring to what they hear and, in time, can make their design process more efficient, producing better loudspeakers. For instance, if a problem shows up in the listening that they didn't notice in the modeling and measuring, but now, because they know what to look for, they can actually see in both of those earlier stages, you can be sure that, with the next speaker they design, they'll have a better chance of eliminating that problem before the listening even begins.

Modeling, measuring, and listening aren't mutually exclusive -- there's no "or" in there. All three are part of the design of high-performance loudspeakers, regardless of how much or how little the final production version costs.

In the May 1st installment of this series, I'll reveal some of the processes used by the very best speaker designers; I'll talk with them, then tell you what they told me, word for word. In this space in April, however, I'll stray from this topic to touch on a more timely issue that I feel strongly about. That article will be titled "You're Crazy if You're Not Getting into Computer-Based Audio Now." Read it and you'll know why.