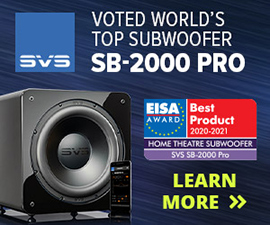 Last month, in "Computer Audio Update," I said that I would complete my series of articles on "High-Performance Loudspeakers" on August 1 with an installment titled "The Contenders." However, the flurry of activity that has resulted from "Computer Audio Update" has forced me to change plans and give you another update on that subject this month, before the new news I have becomes old news. This shouldn’t be surprising -- computer-audio playback is the fastest-growing segment of high-end audio, and where the most activity now is. There’s always something new to write about.

I continue to store my high-resolution audio files on Seagate’s GoFlex Pro hard drives, and not one has failed yet -- of every other batch of Seagate drives I’ve ever owned, at least one failed within a few weeks of purchase. As a result, I now cautiously recommend the GoFlex Pro -- but before wholeheartedly stating that "They’re good," I’ll continue in the coming months to monitor the performance and reliability of the samples I have.

There’s something else new to tell you about Seagate. I bought the accompanying Seagate USB 3.0 adapter (approx. $39.99 from PC Express), and boy oh boy, does it ever make these drives fly. USB 3.0 operates about ten times faster than USB 2.0, meaning the access to files stored on an external disc speeds up substantially. I have yet to find if the higher transfer speed results in better sound quality for music playback, but it makes a definite difference in the transfers of large files and large numbers of files. My own library takes up about 1 terabyte of disc space, and transferring it from one drive to another via USB 2.0 takes many hours. Transfer via USB 3.0 takes a fraction of that time. I can’t wait until USB 3.0 is standard on everything.

After writing about Bryston’s BDP-1 digital player last month, I received one for review. My first impressions of the BDP-1 are very positive, but you’ll have to wait a few months for a full review. As I mentioned last month, we’ll see more products like the BDP-1 in the months and years to come -- consider it the start of something new. 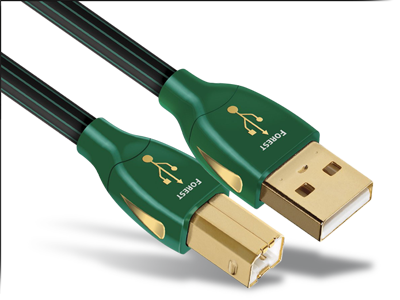 Why do USB cables make an audible difference? If you read the Internet forums, you’ll find countless discussions (which usually devolve into arguments) of the various theories -- some make sense, others don’t -- but to the best of my knowledge, no one has yet solved the mystery. Of course, you’ll also find those who feel that USB cables don’t, and can’t, make any difference at all -- it’s all ones and zeros. It’s no different from the debates about AES/EBU, S/PDIF, and TosLink cables that raged for more than two decades, long before USB came along.

Most of the digital-hardware designers I talk to agree that USB cables can make some sort of difference, even if they can’t say exactly why. I think there’s something to this whole USB thing; if it gets solved, the answer might help us understand a little more about how the playback of digital music works. What we do know is that it’s not just a simple matter of passing ones and zeros back and forth -- other factors are involved. My feeling is that it all has to do with timing accuracy.

Then there’s what AudioQuest said to me after they read "Computer Audio Update." They were obviously flattered that I found their Diamond USB cable to be a good one, but they also pointed out that I more or less gave the impression that you have to use a really expensive USB cable to hear the things I described. The Diamond model they loaned me retails for $700, but now they’ve offered to send me one or more USB cables that cost $100 or less. I’ll let you know what I hear.

In previous months I’ve written about my use of J. River’s Media Center on a Windows-based laptop computer. J. River recently released v.16 of Media Center, which adds even more features to what was already a product very rich in them.

What I most like about Media Center is that it does everything. It rips discs well, has excellent library-management functions, supports every music-file format, and has a variety of output options for bit-perfect transfer. Last but not least, it’s cheap. Media Center’s list price of $49.98 USD is a pittance for all the software it offers. If you have a Windows-based computer, check out the new Media Center 16 -- there’s even a 30-day free trial, so there’s no risk at all.

I didn’t talk about CDs last month, so I’ll end this month’s article by saying that I believe there won’t be much to say about them in the months and years to come. The format has been in decline for about a decade, and is nearing extinction now.

To CD’s credit, it not only lasted in the marketplace longer than many experts thought it would, it wound up being the winner in the war of DVD-Audio vs. SACD, when no one thought it was even a contender. CD proved as durable and as long-lasting in the market as the shiny aluminum-and-plastic discs themselves.

But at last, the lifecycle of the Compact Disc is nearing its end, and not because it’s being replaced by another physical format. It’s downloads that are doing the deed -- mostly MP3s for now, but CD-quality and higher resolutions are gaining momentum. The decline of the CD is reflected in the reduction of stock in stores, as well as the reduced number of stores. In Canada, the last chain standing, UK-based HMV, has been having financial problems for some time now, and is closing outlets left and right. Their current strategy for survival is to get away from selling music and movies and get into things like headphones and other devices.

Audiophiles take note: The future of high-quality digital playback is in music files played back using some form of computer. The optical disc is done.

I promised it, and I shall deliver -- the final installment of "High-Performance Loudspeakers" will be online September 1. This time, anything new in the world of computer audio can wait, no matter what.