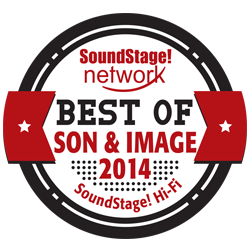 Salon Son & Image, held each spring in Canada, has long been one of my favorite audio shows. One reason has to do with the location: Montreal, a cosmopolitan, French- and English-speaking city with more than a hint of Europe. I love it there. The other is because of the quality of the event itself -- there is always a decent number of exhibitors, and the energy of the patrons is consistently high. The combination makes SSI a unique and thoroughly enjoyable event.

This year’s edition of SSI ran March 28-30, in the hotel the show has occupied for at least the last five years: the Hilton Montreal Bonaventure, in downtown Montreal. The number of exhibitors seemed a touch down from the last two years, but the energy among the attendees was as high as ever, and most of the display rooms were almost always full of enthusiastic listeners. The exhibitors weren’t complaining.

The same week that SSI took place, Sonus Faber celebrated its 30th anniversary with a party and the launch of their Ex3ma loudspeaker, in Vicenza, Italy. I attended this event, covering it for SoundStage! Global. Only hours later, I rushed to the Venice airport and flew to London, then Montreal. I wound up missing the first day of SSI, but the two remaining days were enough for me and fellow SoundStage! Network writer Jason Thorpe to cover the show on SoundStage! Global, and for me to pick two Best Products and two Best Systems.

One of the most expensive products at SSI 2014 was also one of the most exciting: Muraudio’s Domain Omni PX1 loudspeaker ($58,000 USD per pair). The PX1 looks identical to Muraudio’s Domain Omni DA1 ($67,000/pair), launched last fall. The big diff is that the DA1 is entirely self-powered, while the PX1 is passive -- you have to add your own amps, which is what many audiophiles want and why the company created it. 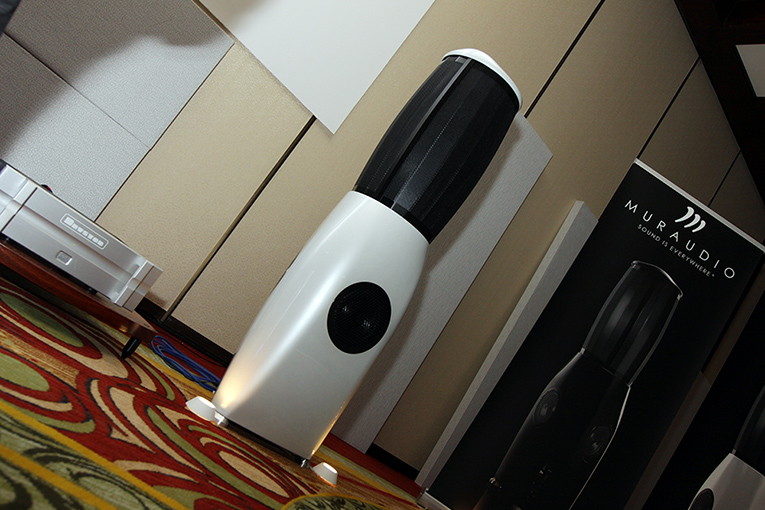 What makes these speakers so exciting is the technology used. Both Domain Omnis comprise three electrostatic panels, curved horizontally and vertically, that operate from about 450Hz up, working in conjunction with three cone woofers, the six drivers positioned so that the sound is dispersed evenly to the speaker's front, sides, and rear. There have been many hybrid electrostatic/dynamic speakers over the years, but never one that disperses sound like this one. Also interesting is how loudly the PX1 is claimed to play: 105dB at 2m, a much higher SPL than electrostatics can typically attain. Muraudio says they’ve achieved this with the patented technologies discussed in a SoundStage! InSight video we released in March. Anyone looking for cutting-edge loudspeaker technology should check out Muraudio. 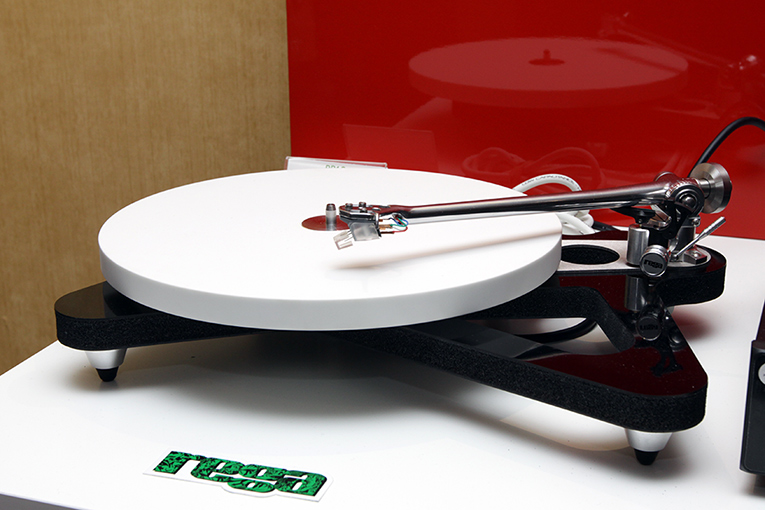 Also demonstrated at SSI was Rega Research’s RP10 turntable, unveiled in Las Vegas last January, at the 2014 Consumer Electronics Show. Now the company’s top turntable model, it was derived from their former flagship, the RP8, introduced over a year ago. The RP10 and RP8 share a foam-core plinth that’s unique in appearance and seems effective at damping resonances, and there are other obvious similarities. But the RP10 has features the RP8 lacks -- most notable are a ceramic platter, the new RB2000 tonearm, and a DSP-controlled outboard power supply. Without cartridge, the RP10 costs $6199 in Canada. Given Rega’s excellent reputation and long experience with turntables, if I were looking to buy a record player, the RP10 would be on my short list.

In my estimation, Muraudio’s exceptionally large room was the most impressive, best-sounding space at SSI 2014. On four wide couches positioned end to end, listeners could sit anywhere from directly in the center to way out to the sides, and revel in how evenly and smoothly the PX1s dispersed sound throughout the room. Most impressively, the tonal balance never faltered, and the soundstage, even way outside the center sweet spot, was still credible -- it never completely collapsed, as it does with conventional speakers. The bass was also noteworthy -- Muraudio claims anechoic low-end performance down to 30Hz, and to 20Hz in a typical room. Nothing I heard suggested otherwise -- the PX1s’ bass was full, rich, and very deep. 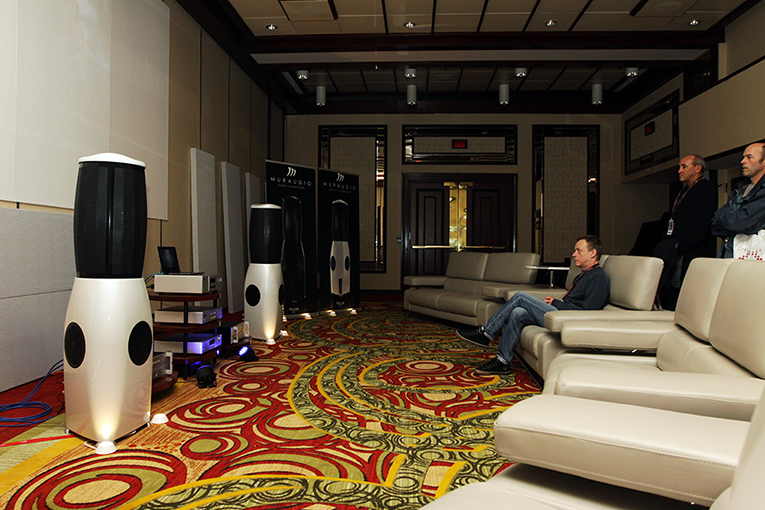 I’d be remiss not to mention the other equipment in this system, which of course also contributed to the fine sound I heard. Two Bryston 7B SST2 mono amplifiers (600W into 8 ohms) seemed to ably control the PX1s, allowing them to play super-loud when needed. Upstream from the amps were three components from EMM Labs: the PRE2 preamplifier, the DAC2X digital-to-analog converter, and the TSDX SACD/CD transport. Cabling throughout was also by EMM.

A short distance from the Muraudio room, Bryston was showing no brand-new products, but they did exhibit an updated version of their Model T Signature speaker, which sells in Canada and the US for $7495/pair in vinyl veneer (add $1000/pair for a real-wood finish). Each Model T Signature and Model T Passive has two tweeters, two midranges, and three woofers, and what’s new are the tweeters. According to Bryston’s James Tanner, the new tweeter is supposed to offer smoother on-axis response and better-controlled dispersion. Indeed, the sound from the Model Ts was notably cleaner and smoother in the top end than I recall hearing from them before -- and the clean midrange and ferociously deep bass that both Model Ts have long been known for were undiminished. 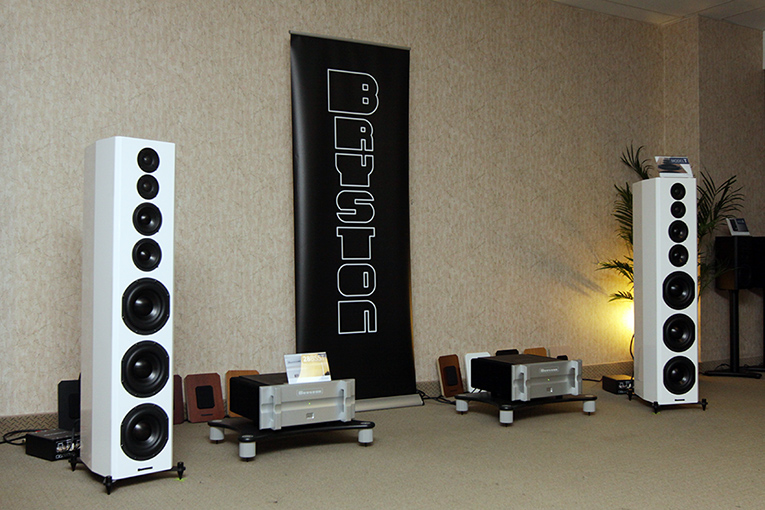 The electronics used in this system were, no surprise, all from Bryston: 28B SST2 mono amplifiers, BP-26/MPS preamplifier, BDA-2 DAC, and BDP-2 digital player. When I asked about the interconnects and cables, Bryston president Brian Russell said it wasn’t brand-name stuff, mainly because the company doesn’t believe in going crazy on exotic cables, preferring to focus instead on the electronics and speakers. Fair enough -- the sound in the room was great.

Readers familiar with Bryston, EMM Labs, and Muraudio likely know that all three are based in Canada -- an indication that the Great White North has what it takes to produce state-of-the-art hi-fi. What’s refreshing is that while EMM and Bryston are long-established names, Muraudio is a new kid on the block. I think this speaks well of the Canadian audio industry’s past and present, and bodes well for its future. All in all, these three companies made a great showing, and Montreal was the perfect place to showcase it.