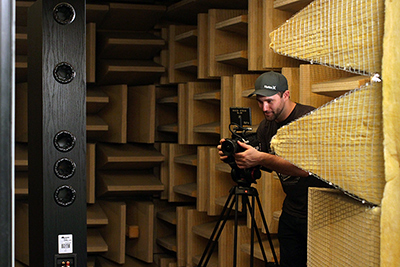 Videographer Chris Chitaroni in Axiom's anechoic chamberThe SoundStage! InSight video series got off to a better start than we had even hoped for when it debuted in March -- the quality of the final product met our high expectations, and the feedback from our readers was stronger than we’d anticipated it would be. There’s no question that we’ll be visiting many more companies and doing plenty more videos about their products.

The focus of that first episode, which I wrote about in this space in April, was Muraudio’s Domain Omni loudspeaker, then available only as an entirely self-powered design and known only by that name. It’s now also available as a fully passive design (add your own amps), in a version unveiled at Salon Son & Image 2014, in Montreal, Canada. With the release of the passive edition, Muraudio began calling the active model the DA1 and the passive version the PX1. They look the same except for their rear panels, which house the connectors.

That video worked so well because of the unique look of the speaker, the fascinating technology behind it, the interesting people involved in creating it, and Muraudio’s impressive manufacturing facilities. All of that combined to let us showcase the company, product, and people in a visually arresting and enticing way. The video runs just a hair under four minutes, but most people told us that it feels half that length.

The only downside is that Muraudio’s Omni speakers are pricey: $58,000 USD/pair for the PX1, and $67,000/pair for the DA1. That’s a lot of scratch -- for most people, owning such speakers is little more than a fantasy. That’s why for our second SoundStage! InSight episode, which went online in mid-May, we decided to focus on a product from Axiom Audio. Axiom has been in business since 1980, and is well known for making high-performance loudspeakers that most audiophiles can afford, and, like Muraudio, is based in Canada.

Axiom’s lowest-priced speaker, the M2 v4, starts at $440/pair; their most expensive, the LFR1100, starts at $4580/pair (prices are for a standard finish). In high-end hi-fi terms, those prices are low. We chose their newest model, the M100 v4, which starts at $2790/pair and is Axiom’s most expensive forward-firing speaker. (The LFR1100, a bipolar design, has drivers front and rear.) 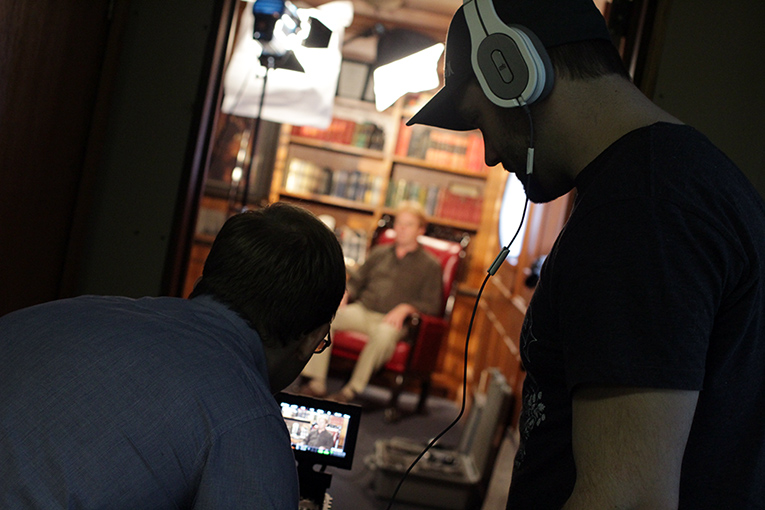 Filming Ian Colquhoun in his office

But it wasn’t just the low prices that led us to Axiom. Other factors that influenced our choice included the company’s impressive 34-year history; their unique location in Muskoka, a rural resort area in Ontario; founder and president Ian Colquhoun’s direct involvement with Dr. Floyd Toole’s groundbreaking research into loudspeakers at Canada’s National Research Council (NRC) in the 1980s; Axiom’s topflight design and research facilities, which include a replica of NRC’s well-known anechoic chamber (where we measure the speakers reviewed by the SoundStage! Network); outdoors, a 100’-tall pole for measuring ultra-low bass response; and Axiom’s impressive manufacturing capabilities, which allow them to build all their speakers in Canada. And there was one other thing we thought important: By the time we shot the video, Oliver Amnuayphol had already completed his review of the M100 and submitted it for final editing. We published it this month, along with measurements of the speaker taken in the NRC’s anechoic chamber.

Publication of a careful review with objective measurements, and a first-rate video posted online at close to the same time -- this combination provided unprecedented insight into the speaker, the company that makes it, and the people behind it. Add to all that the inherent advantage over print enjoyed by online publishing -- instant accessibility around the world -- and you have nothing less than a smorgasbord of material that will thoroughly enlighten readers interested in Axiom Audio and the M100.


We hope you’ll take a few minutes to watch the new video (it’s embedded directly above). And, as I did for the Muraudio video, I invite you to send me any feedback you might have, positive or negative. I promise to read it all.

Next month in this space will be the Best Products and Best Systems from High End 2014, held May 15-18 in Munich, Germany, and covered on SoundStage! Global as it happened. It’s very likely that one or more of the new products we covered there will wind up in a future SoundStage! InSight video!